I've been wanting to design a deck of playing cards for years and years. I mainly grew up playing War, Slap Jack, Poker, and Black Jack. Now I mostly play Egyptian Rat Screw, Hell, and Bush Hog Rummy at family reunions and the occasional game night. I've also been collecting playing cards while on vacations throughout my life. I finally got around to making my own. Woot!

I'm not sure why the 1st Ante Ups card deck also became a Squibs Deck, but it did. These are the rough sketches for the card back and the suits.

Designing the suits to be unique, but still easily recognizable was more difficult than expected. I wanted the cards to be more than just a decorative deck. I play a lot of games that require fast reaction times, so they needed to be instantly recognizable.

I probably could have found a font that would have work well enough, but I like doing things the slow painful way most of the time. I sketched up all these on graph paper, then scanned them in. I tried making it a functioning font, but that's trickier than expected. I couldn't figure out how to get the kerning right, but I didn't need to type an essay. Someday I'll be able to type an essay in my awesome Sharpie written words. Ha. 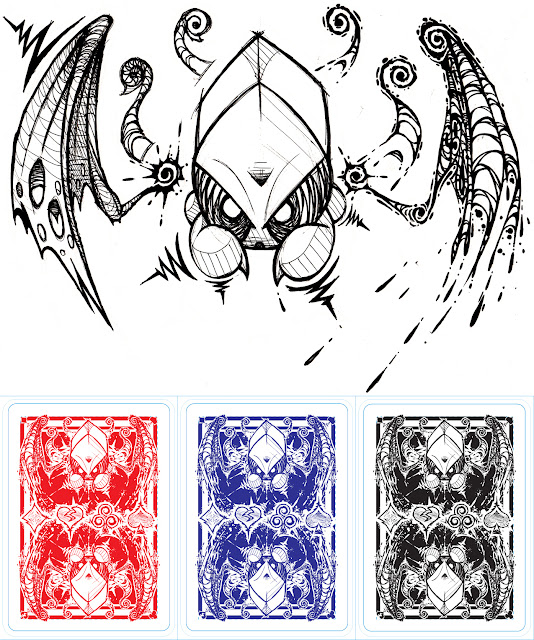 This is the refined Squib that I went with,  but he still went through a lot of digital revisions. I also wanted the back to look similar to traditional Bicycle and Hoyle playing cards. Red, Blue, and Black are common card back colors, so I wanted to make some of each. You'll notice that I ended up using a darker Red and a lighter Blue for the final art. 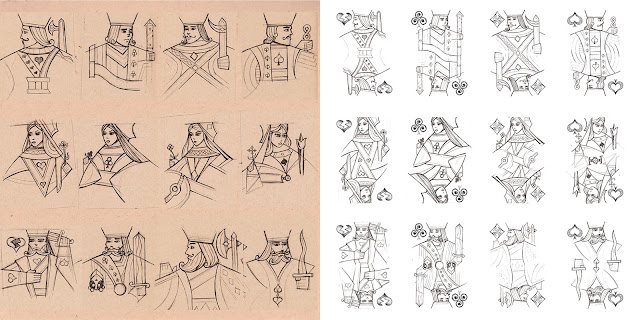 The face cards were by far the most work. I sketched these out in January, but stopped shortly after. After I flipped the art, I realized that I left out a ton of details in the sketches.  It was a daunting amount of work, and took me a long time to get started again. I only recently finished it all and it took way longer than expected. 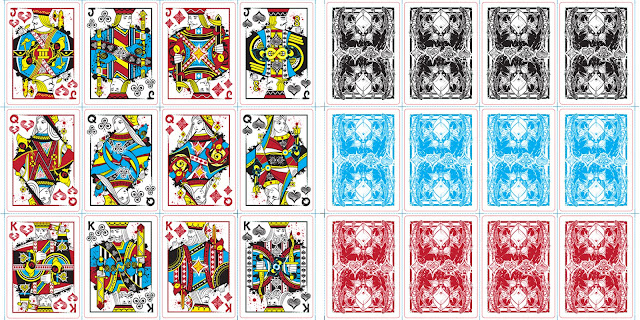 I wanted to try and keep all the traditional elements for each card. The characters had to face the right way, hold the right weapon, be in profile or front facing, and of course commit suicide when appropriate. It took forever to fill in all the designs. Originally, the only Squib was supposed to be on the King of Clubs. As I worked on the art, the deck became more of a Squib deck than I had planned. 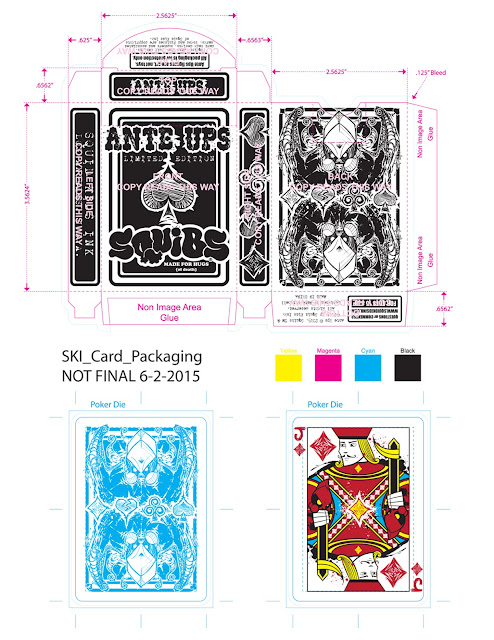 I had never printed a deck of cards before, but this is the basic info I sent to a couple place for quoting. There were a couple false starts and plenty of wasted time, but that's bound to happen on a new project. I ended up using a place in Texas that was able to match China pricing and even delivered ahead of schedule. It's so nice to be able to make something domestically for a change.

The shipment arrived on a nice mini pallet that we'll either turn into a table or have a nice fire at the beach one night. It's crazy how heavy a bunch of card decks can be, but that's the same for most paper goods.

The printer was also able to send me some uncut sheets that I requested. I'm gonna frame some for myself, and might make a couple available for sale.

I'm still amazed that I was able to finish 52 unique cards, 2 jokers, and 2 extra cards. Not to mention the back design and packaging design.