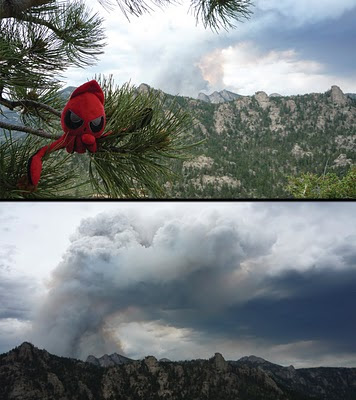 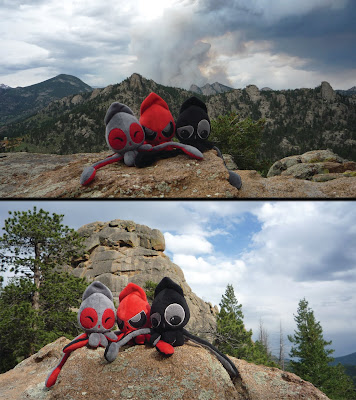 thankfully it was only a reasonably small fire that was put out by the next day. 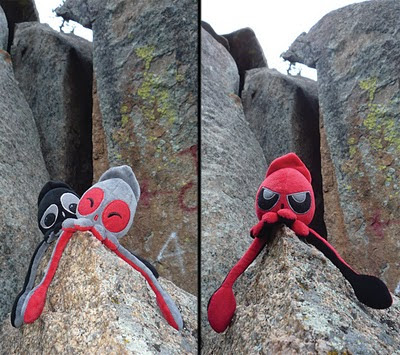 we managed to do a little bit of rock climbing while we were up at Old Man Mtn. it was more like rock scrambling, but still lot's of fun. 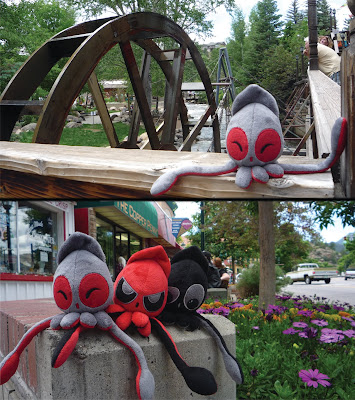 Estes Park CO is a pretty amazing place. pretty typical touristy town, but the scenery is incredible. we also had some of the best ice cream and cookies there.

we were over in Colorado for my brother's wedding. it was great to see some old friends and family. my dad even got some video of a bear that came around the cabins one mornin. unfortunately, i was sleeping, so i missed out. at least he got the video.
Posted by Nate at 3:40 PM No comments: 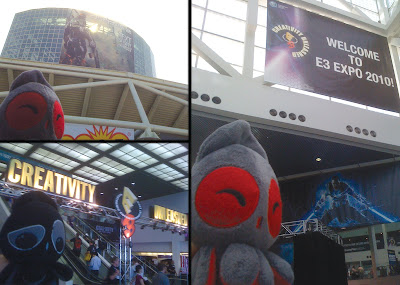 i'm doin my best to get these little guys out every event i can. of course we're usually just spectators, but it's still fun to take photos of them when i can. 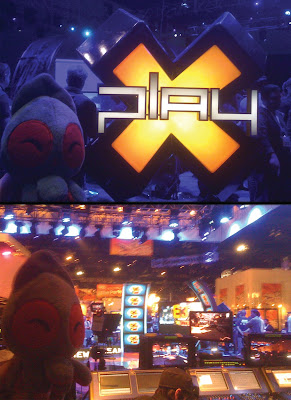 i'm a big fan of G4 and even though they don't know i exist, it was cool to see their E3 stage.

im not the biggest fan, but i've played my fair share of Halo. i am a fan of the full size sculpts they had on display. 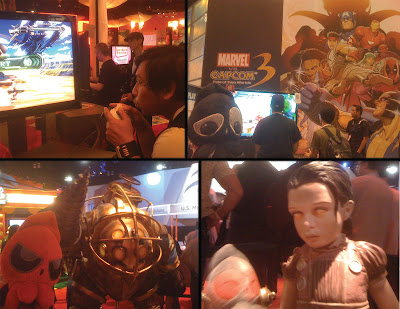 i was looking forward to Marvel vs. Capcom 3, but i think i'm gonna stick with SSFIV. i still like the Bioshock characters even if i didn't play the second game yet. and then there is Chito playin a Contra-like game. 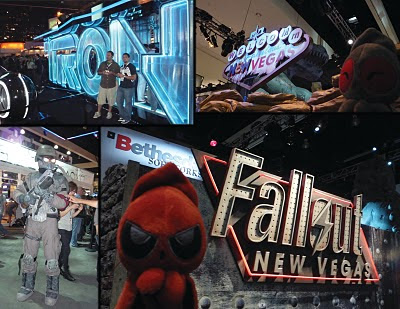 the Killzone 3 line was way too slow to wait in, and Fallout New Vegas was behind closed doors. we got to try out Tron, but it was rough. i sure hope they can make it better before the release date. 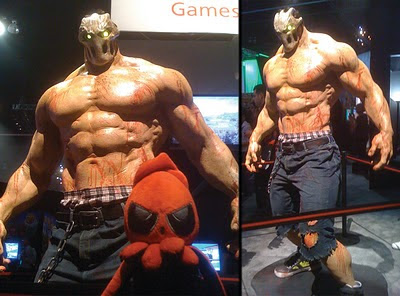 we could never afford a Turbo Graphics 16, so i never got to play the first Splatterhouse. not sure about the new game, but this guy was looking pretty angry like my little buddy here. 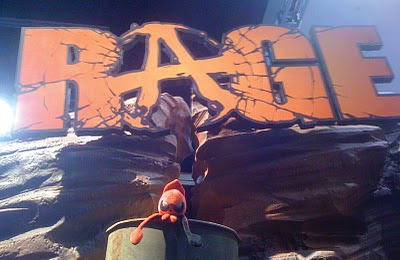 'nuff said.
so, i've been to E3 around 4 times now and it's usually the same. loud and kinda annoying, but lots of booth babes around. there are some really long lines that take forever and some very short lines that also take forever.

it's one of those places that is cool to see in person, but is better to watch on TV. G4 covers it pretty darn well and usually covers all the stuff that most people aren't allowed to see in person anyway. 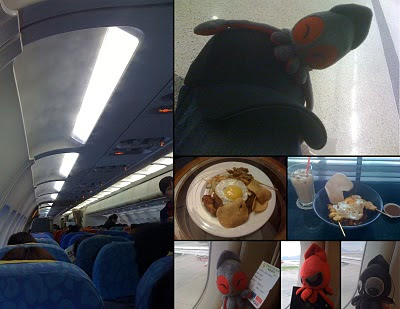 so, here are some photos of my trip to Cambodia in May 2010. my buddy Fraser and i decided to make the most of a work trip and take a mini vacation to Angkor Wat. it was a last minute trip, but well worth the money and time. it really felt like we were part of the show The Amazing Race, at least for around 48 hrs.

you can barely see it in the photo, but the condensation in the plane was crazy. it looked like someone had turned on a fog machine. and like usual, i eat Nasi Goreng when ever i can. it always reminds me of my trip to Indonesia.

i'm a big fan of clouds and on the flight in we saw some of the best clouds i've ever seen. Cambodia was pretty flat. i didn't know what to expect, but it looked pretty normal from way up in the air. 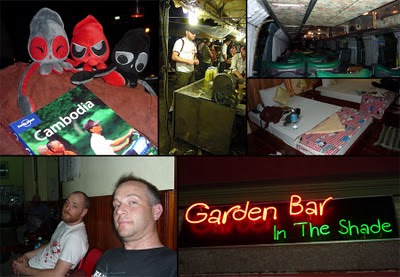 we landed at 530 in Phnom Penh, but our bus to Siem Reap wasn't scheduled to leave until midnight. so, we walked around a lot. that's me buying a sugar can drink. my Squibs were hangin out at the Garden Bar with us, and we only saw 5 giant cockroaches there.

we were supposed to be back at 11pm to leave by midnight, but the bus didn't show up until 1am. we the bumpiest 6hr bus ride ever. with hardly any sleep, we arrived at 630 am and went straight to a hotel. they had awesome fake snoopy "California Dreamy" blankets, but no sleep, we just cleaned up and got straight to sight seeing. 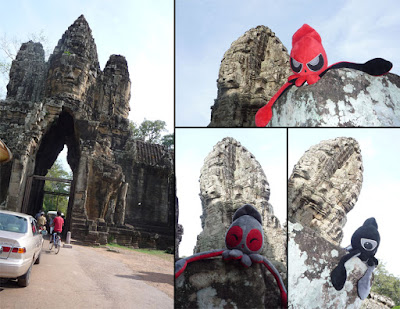 our first stop was at Bayon. it's hard to describe how cool these places were. and the photos can only half way capture it. the whole trip was so short that it feels like i wasn't even there. one of my favorite places was Bayon. the faces were huge and all over the place.

WARNING: some images below may offend certain people. i apologize for being an ignorant pale face, but i was obviously unaware of certain do's and don'ts in Cambodian culture. 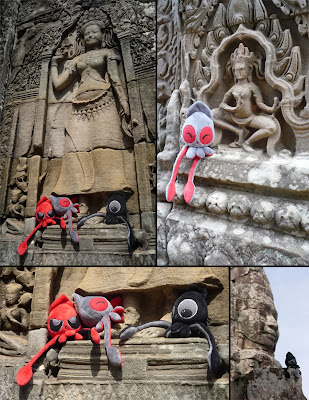 so, here my Squibs hangin out with some local ladies and enjoying the views. 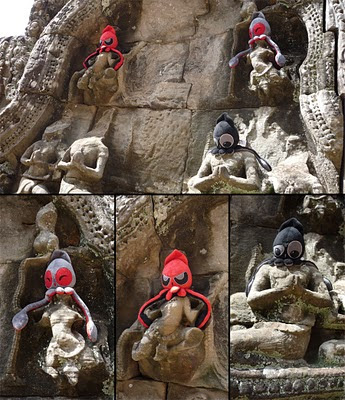 apparently, these Squibs are praying and offending all at the same time. this was the point that a nice young lady said "stop being an idiot" or something close to that. seems that putting Squibs on the decapitated bodies of their ancient gods is not a good thing. i was unaware, and was just looking for a funny photo. 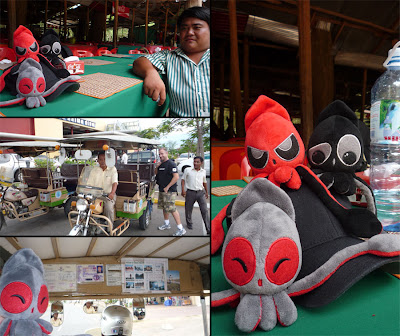 here is a photo of Tattoo from Fantasy Island with my Squibs. he was our tuk tuk driver while in Siem Reap. this guy was great, but the other guy in Phnom Penh was a greedy, greedy man. i could have given him a $20 tip for a 10 minute ride and he still would have complained. 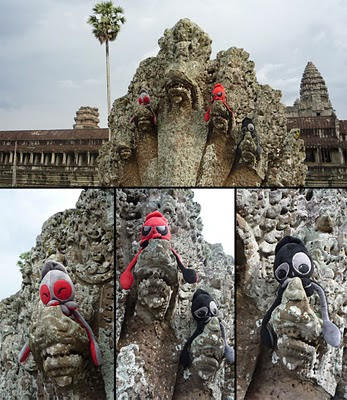 surely, these are as offensive as the other photos, but with absolutely no explanation of what the statue signified, i chose to take another amusing photo. to me, it was simply a 5 headed snake. i turned it into a 2 snake and 3 Squib headed MONSTER!!!! 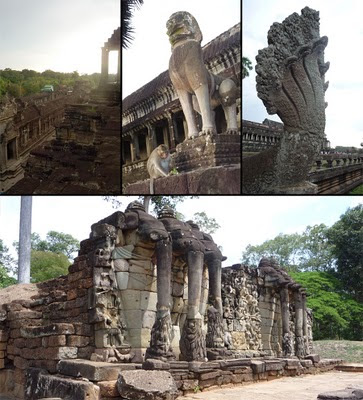 these photos were taken around Angkor Wat and Bayon. i love monkeys, but they freak me out. once they get close, i'm afraid they will run up my body and eat my eyeballs. 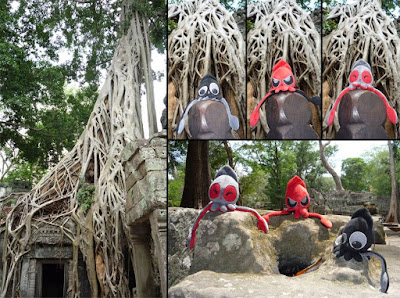 remember the first Tomb Raider movie?.... well, i barely do. apparently, part of it was filmed here. so, i'll have to watch it again to know what i'm looking at this time. the trees were growing straight out of these temples and destroying them. definitely one of the best places we saw. 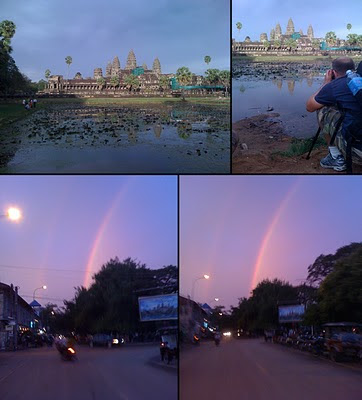 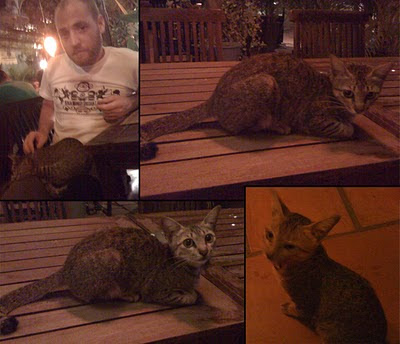 that night we at dinner i met a nice little lady. she was a real sweetheart and apparently a regular at the restaurant. i'm pretty sure it was the food we ate there that made us sick for the next 2 weeks. at least the cat is a good memory. 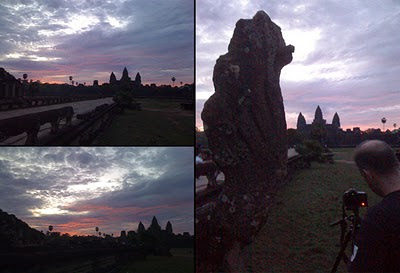 we woke up at 330 the next morning to check out the sunrise at Angkor Wat. it was still hot, but nice compared to mid day. it wasn't the most amazing sunrise ever, but in that location any sunrise would be pretty cool. 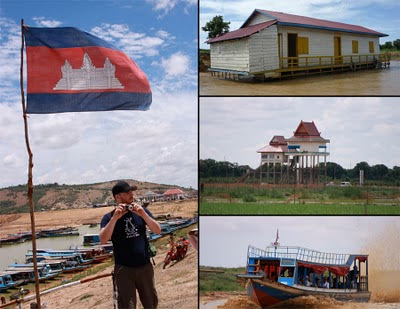 the Angkor Wat was great sunrise, but that wasn't as interesting as the floating village. and by interesting, i mean horrible on just about every level imaginable. our tuk tuk driver suggested we take the riverboat tour. we were running low on cash and ended up paying in 4 different currencies. USD, HKD, Candian, and Cambodian.

it was the dry season, so the water was extra grimy and shallow. boats were getting stuck and spraying the filthy water on other passing boats. luckily, you could pull down curtains to defend yourself. 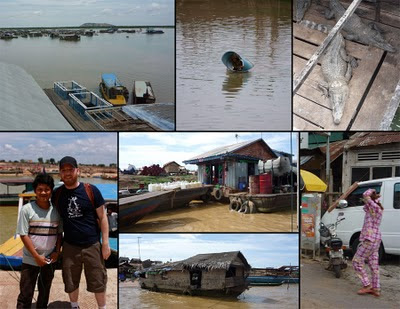 our tour guide wasn't a licensed tour guide, but he spoke really good English. Fraser took the photo of the person in the single person "boat". they had some crocs at the tourist stop where you were required to buy a drink before leaving. and take a look at the pajama girl. this was a very common style for the ladies. i think that style is a bad choice for both the ladies and the fellas. it was painful to look at.

it was an interesting 1.5hr tour, that i would never recommend for anyone to ever take. we saw tons of kids selling stuff everywhere we went, but here all the kids had snakes. then we saw a kid with missing arm, a kid with severe burns, and a toddler get beat with a stick by his mom. then she apparently threw him in the river. luckily, a guy in another boat went out and picked up the child. it was clearly a different world and culture. so far, it was the worst thing i've witnessed in my life. 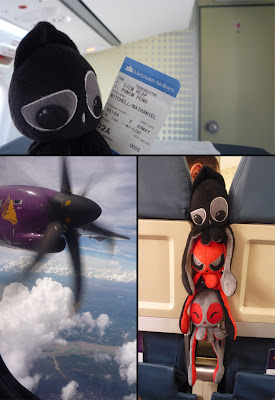 when we arrived on Friday, it was clear that we didn't have enough time in the weekend to take two 6hr bus rides. so, we got a nice 40 minute plane ride back to Phnom Penh instead. it was a nice little break from the heat and humidity.

BEWARE: TERRIBLE THINGS WILL BE DESCRIBED.....seriously. 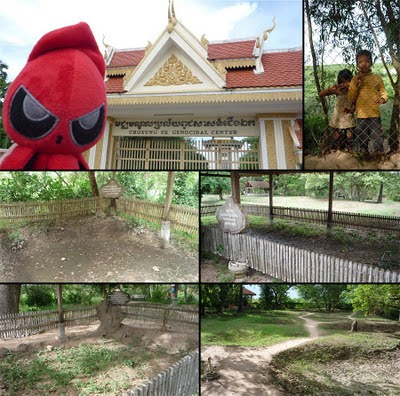 i took one photo of the angry Squib before entering the Killing Fields. i knew it wasn't a happy place before goin in, but had no idea how bad it really was. we only had a half of an hr to tour the place. it wasn't enough time to get the whole story, but it was enough time to see how horrible people can be too each other.

the 2 kids lived just on the other side of the fence and seemed very friendly. then their older brother came along and it quickly turned into another plea for money. the people were in Cambodia were very nice. unfortunately, most of the time it was so you would buy something or just give them money.

the images look peaceful enough, but if you can read the signs, they say how many people were murdered and buried there. the largest grave held 450 people. most only contained around 100 bodies. all of this happen around 30 yrs ago and was happening throughout the country. 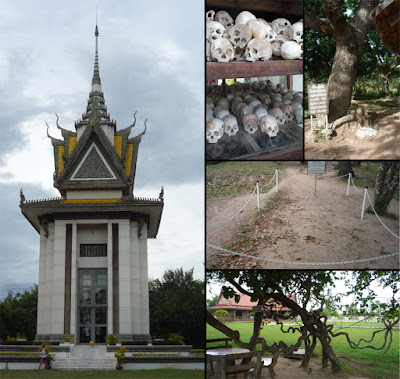 this monument was built to hold hundreds of human skulls that were all victims of the genocide. the fenced off area is where some bones still show up after it rains. babies were smashed against the tree in the upper right hand corner, so that they wouldn't grow up and seek revenge. 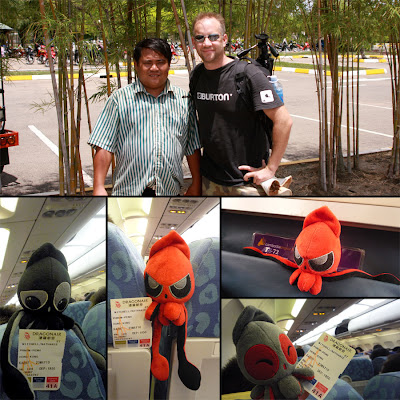 and here is Fraser and Odd Job getting ready to part ways. it was a very short trip, but we saw a ton of stuff in such a short period of time. it was one of the most amazing and horrible places i've ever been.

so, Cambodia was a great experience. it was definitely on of the hottest and most humid places i've ever been, but still enjoyable. i don't know if i'll go back anytime soon, but that's only because there are so many other places i haven't seen yet.
Posted by Nate at 8:39 PM 2 comments: