I first talked to Frank Kozik about doing a new version of his Smash the State 10-Doh! figure last November at Dcon. This image shows how it changed over time. The middle image is the one I showed him for approval. 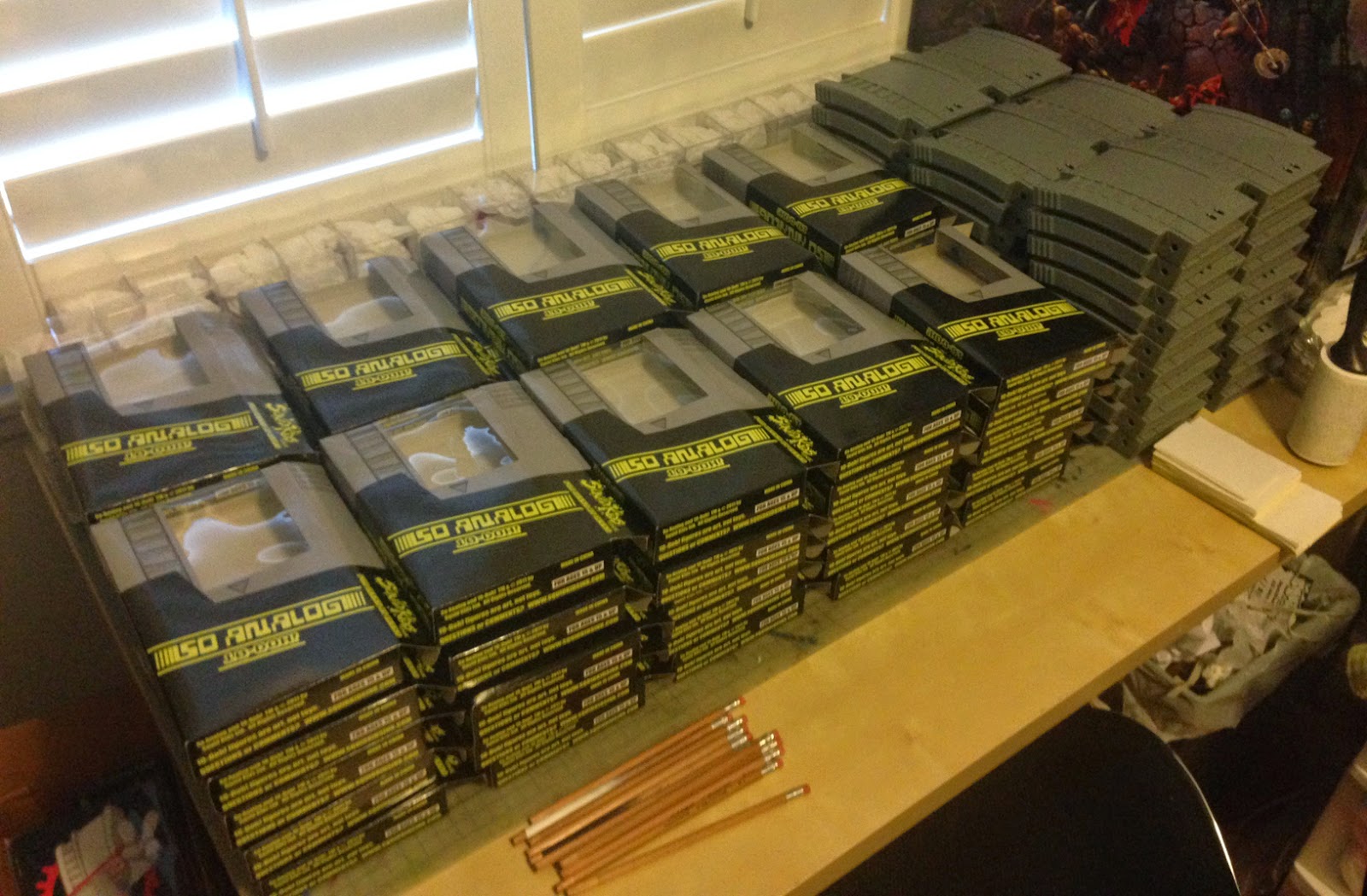 We agreed to do 50 figures total. It doesn't sound like a lot, but doing anything 50 times is very tedious. Especially when you have to do 50 different things 50 times. Unpacking and repacking is just one of several things that I didn't take into consideration when planning this project. Little things like that add up quick and take more time than expected. 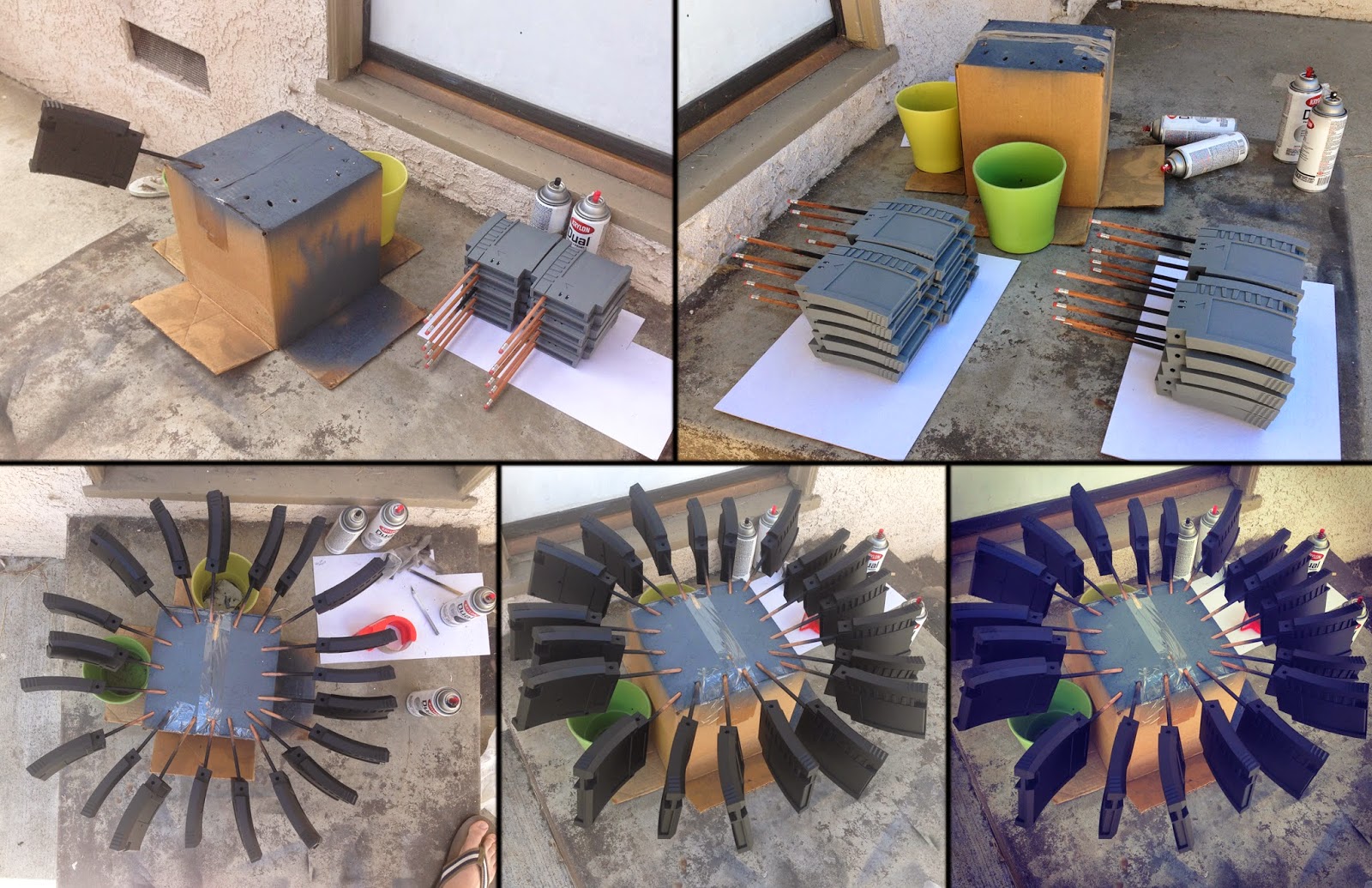 I never made any large black 10-Doh! figures, so I had to paint all of them. I don't have a paint booth set up yet, so my back porch had to suffice. 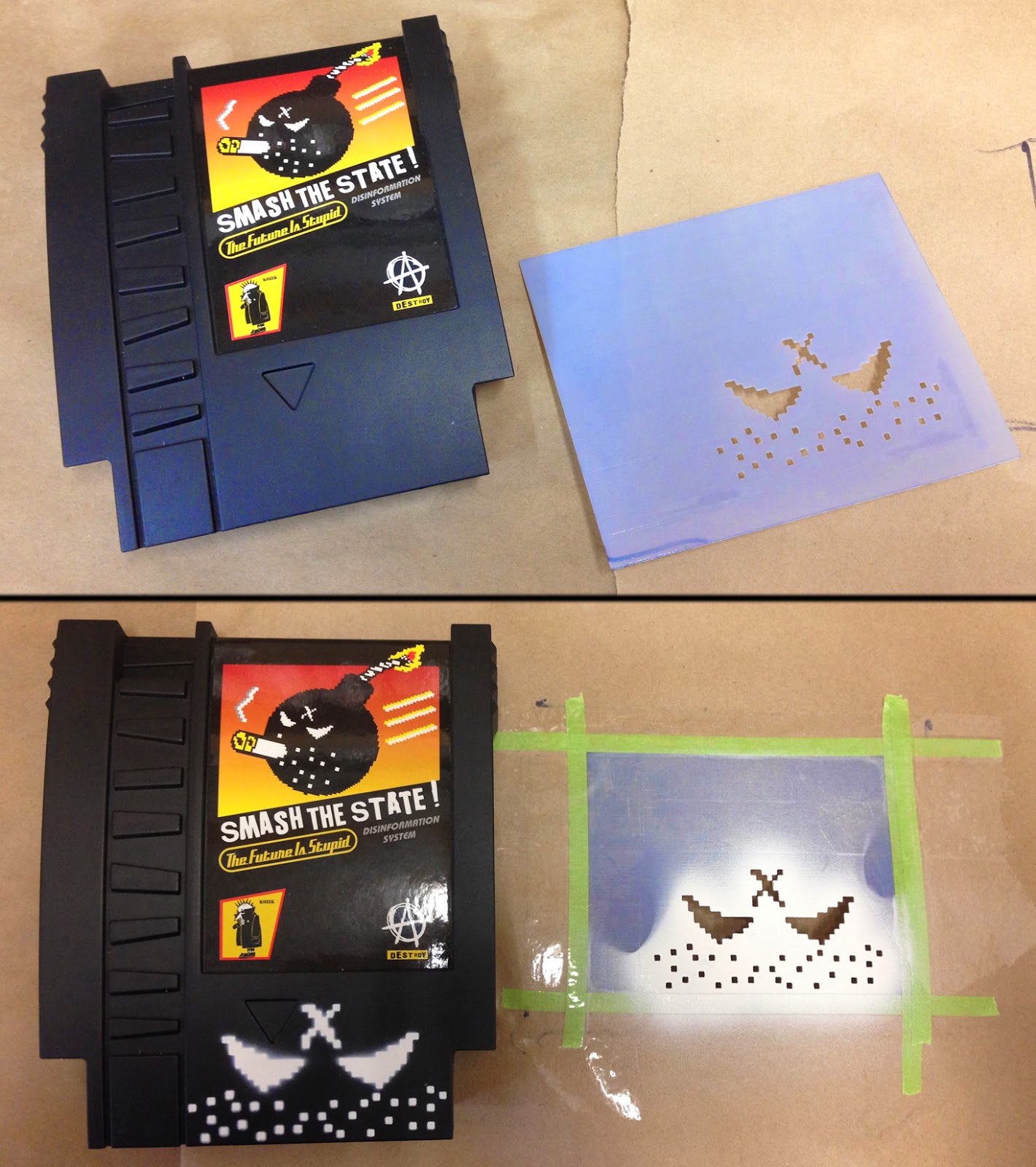 I originally tried doing a 3D printed mask, but you can see the results were fuzzy and problematic. Unfortunately, I still have to pay for that mask. It's all part of the trial and error that goes into each project. 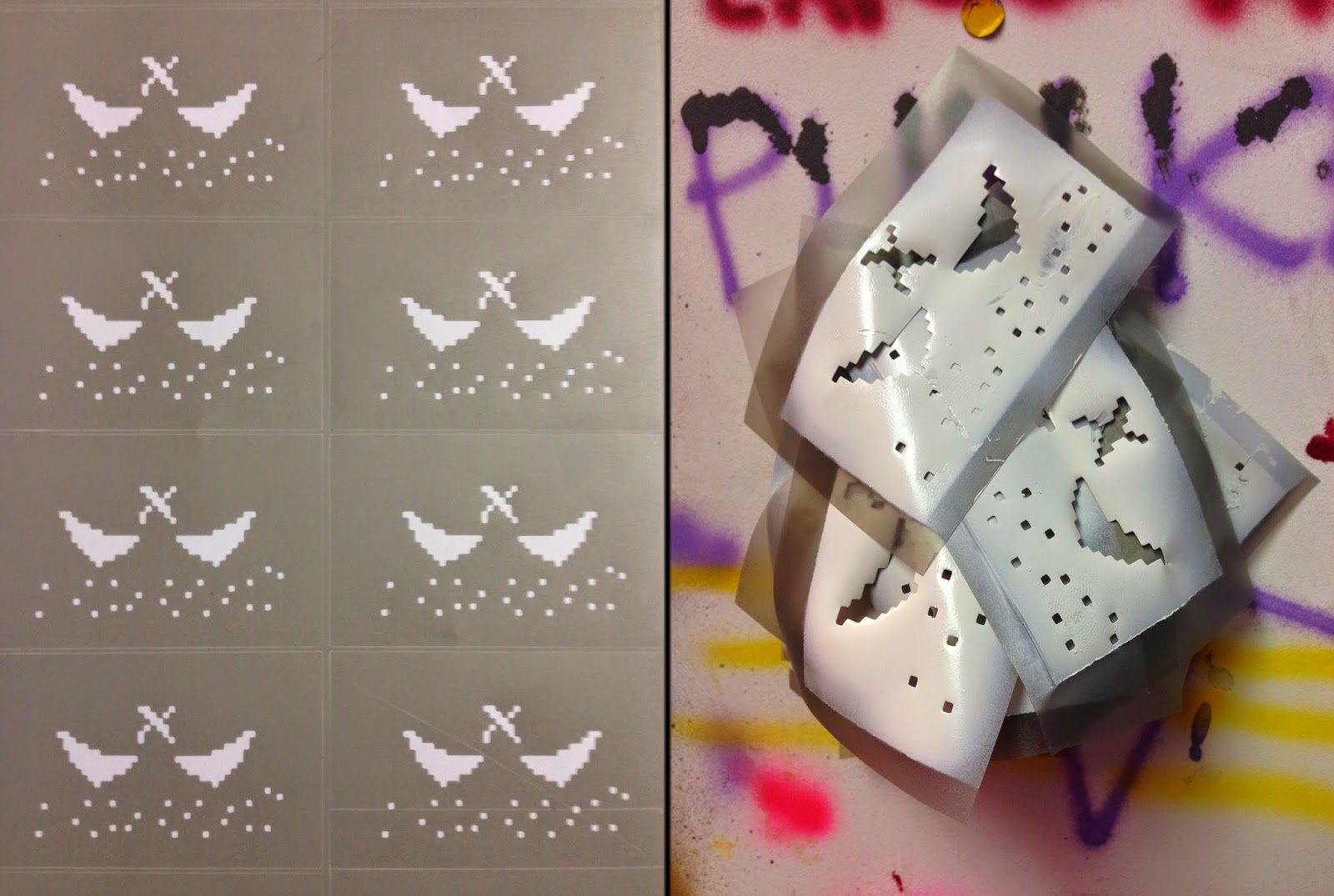 Carlos East of The Beast Brothers was kind enough to help out by creating these masks for me. I picked out all the eyes, X's, and stubble, while he painted them all. He totally saved my butt on this one.

I thought a real pixelated cigarette would be a great accessory to match the label. I did this model in Rhino and I Photoshopped the colors in for the mockup. 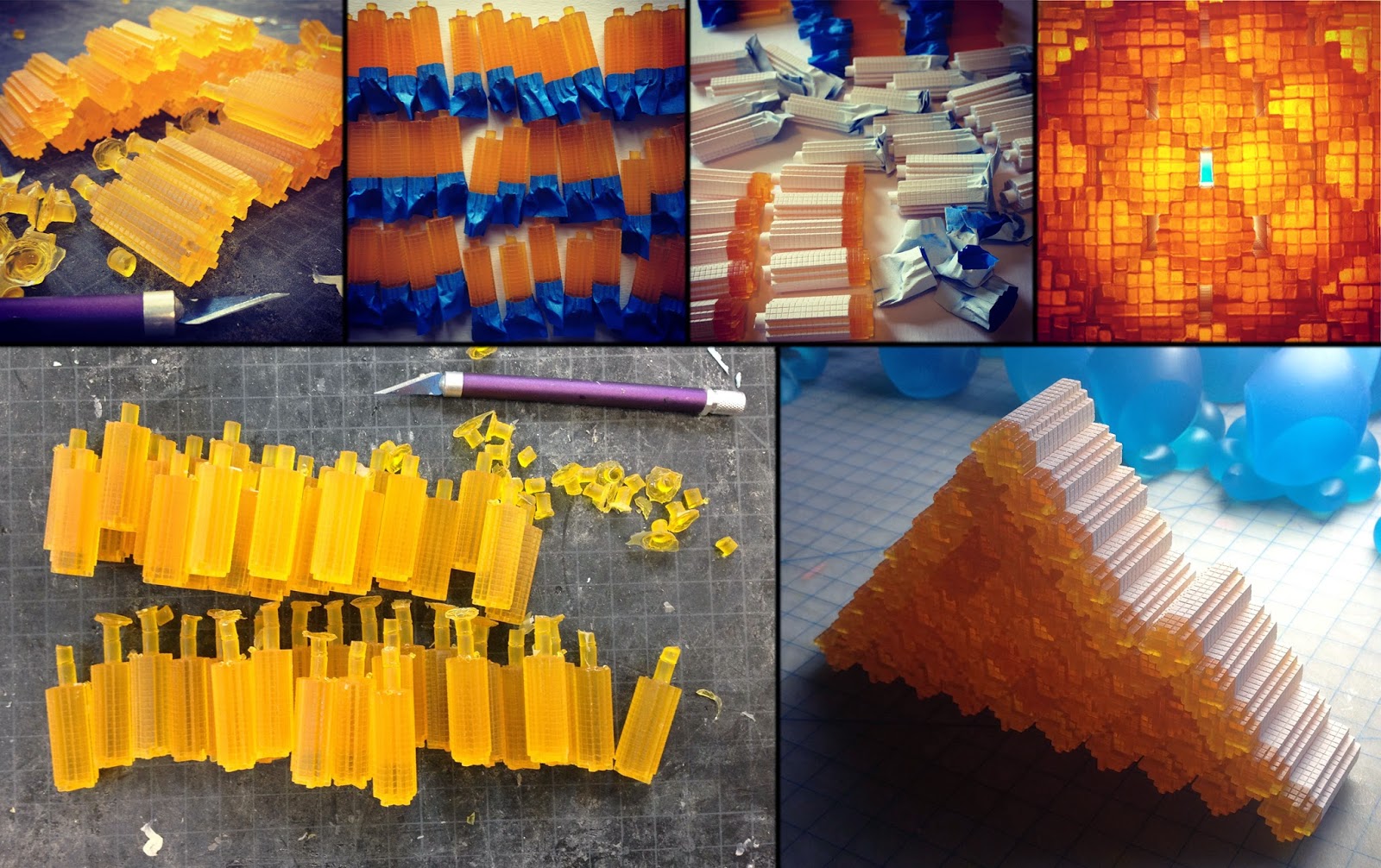 Mana Studios did the output, molding, and castings. I had to trim, mask, and paint all 50 cigarettes. 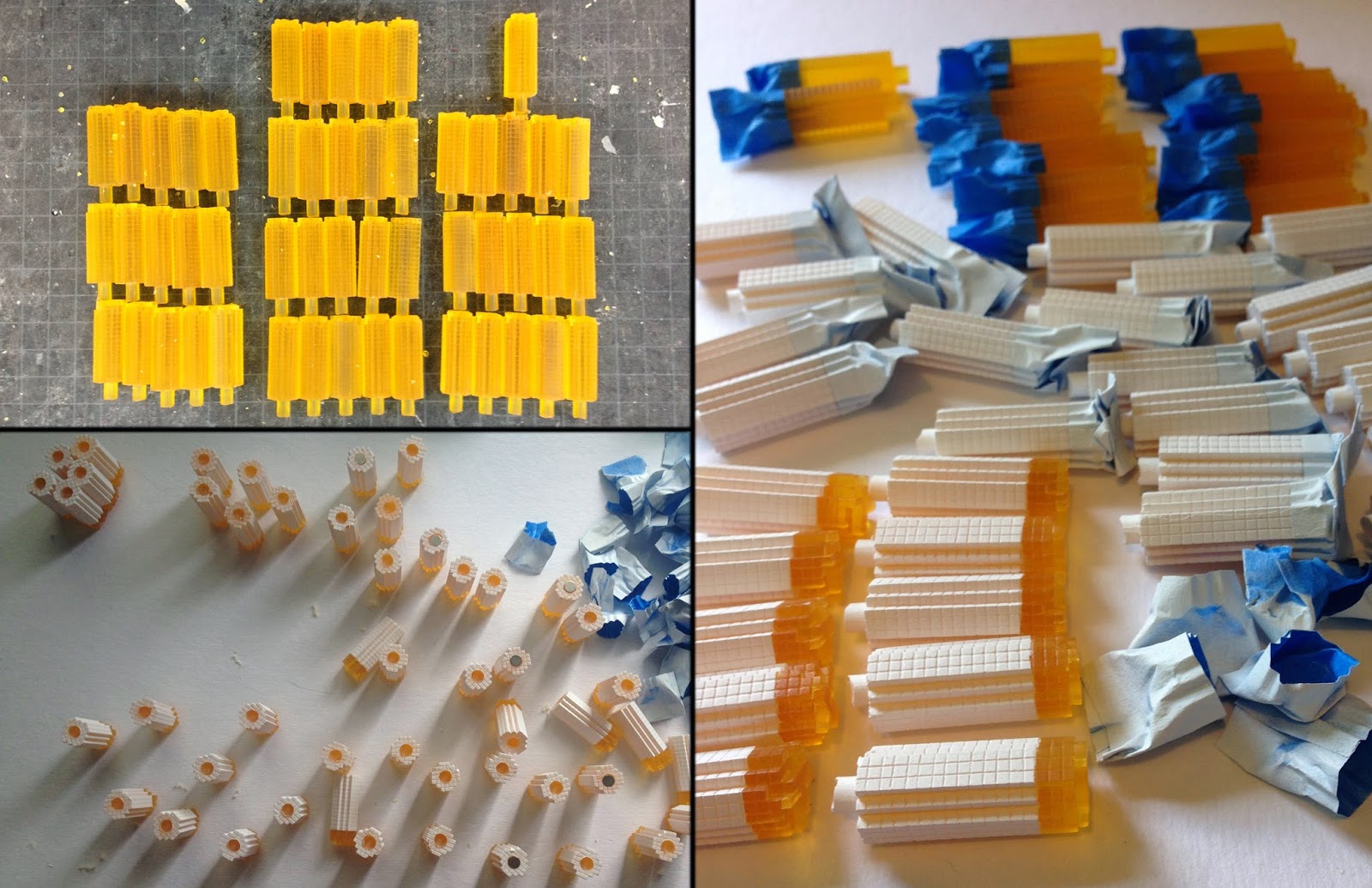 I was originally planning on drilling a hole in the body and using the peg on the cigarette to secure it. Carlos recommended that I use magnets. It was great advice, but a lot more work. I ended up drilling all of the cigarettes and bodies, then gluing in the magnets. It wasn't easy, but the results were well worth it. 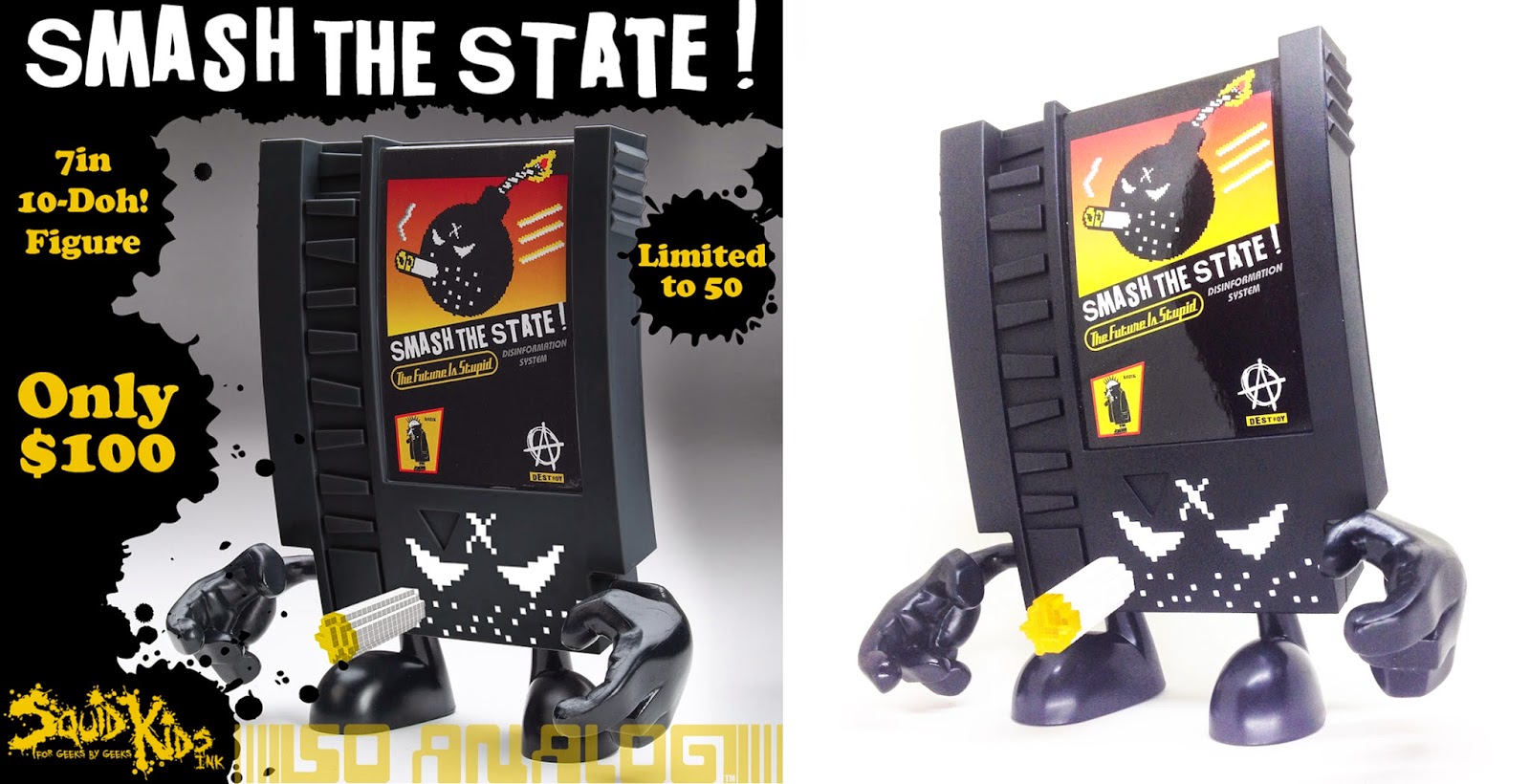 This shows the mockup next to the 1st finished sample, and I'm really happy with the results.

These debuted at SDCC 2014 and sold pretty well. It's not a cheap figure and hopefully this blog helps explain why. I have some that are signed by Frank, so order soon to get those ones.
http://squidkidsink.bigcartel.com/product/smash-the-state-custom-figure
Posted by Nate at 12:05 PM 2 comments:

One of the great things about having this blog is that I get to explain things a bit more than on the Kickstarter page. Of course, sometimes I should probably keep my mouth shut. Ha. So, sit back and read some info on why these pledge levels are the way the are. WARNING: The truth isn't always fun, exciting, or what you want to hear, but it's the truth.

I have a love hate relationship with Kickstarter. It's an amazing platform for raising money, but it's also a ton of work that starts way earlier and ends much later than the ulcer inducing month that most campaigns run. 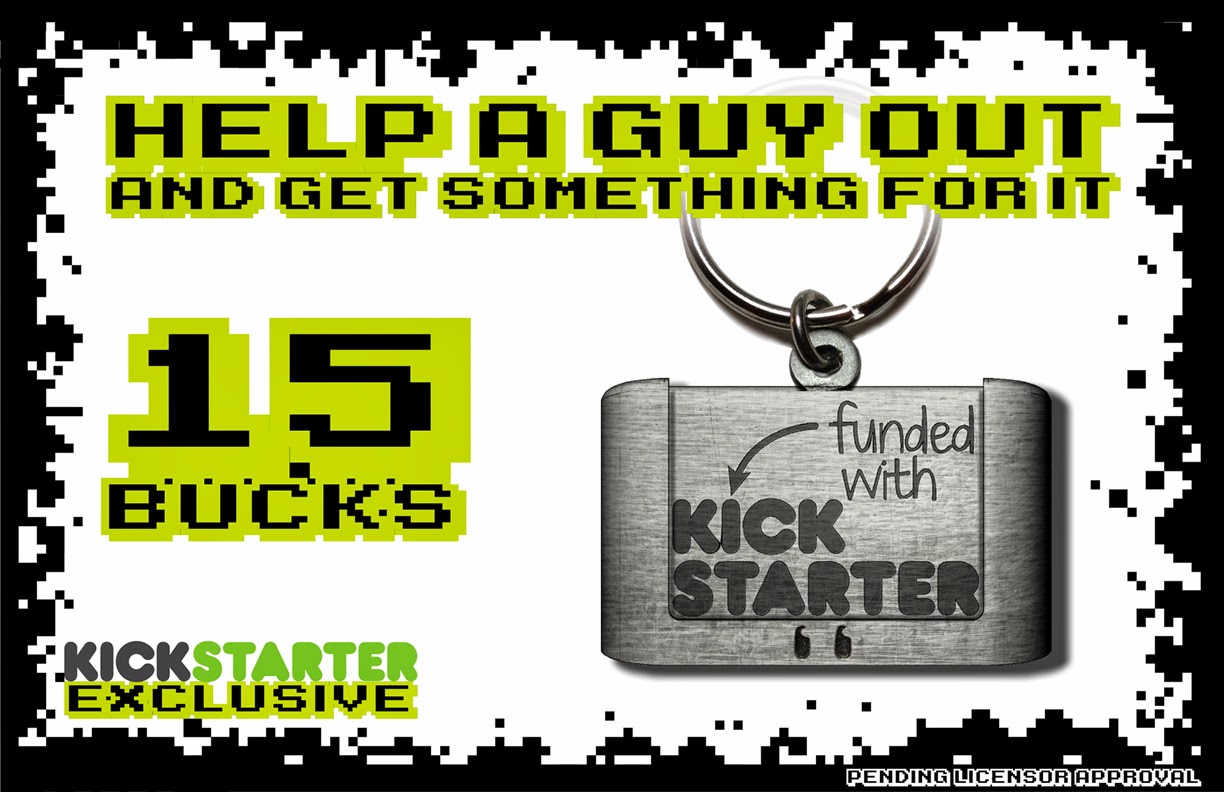 I personally like getting backer rewards that remind me of my contribution to a project. That's why I used the "Funded with Kickstarter" for the keychain. So, why's a keychain cost 15 bucks? Well, just like everything else that's ever been made, it costs money. These are die cast metal keychains that are made in the Los Angeles area. It takes time and money to digitally model, output, clean up, mold, cast in resin, remold, cast in metal, clean up again, attach keyring, package, and ship. That's a lot of step to get to a simple keychain, that is really meant to raise money for the Mega-Bit figures. 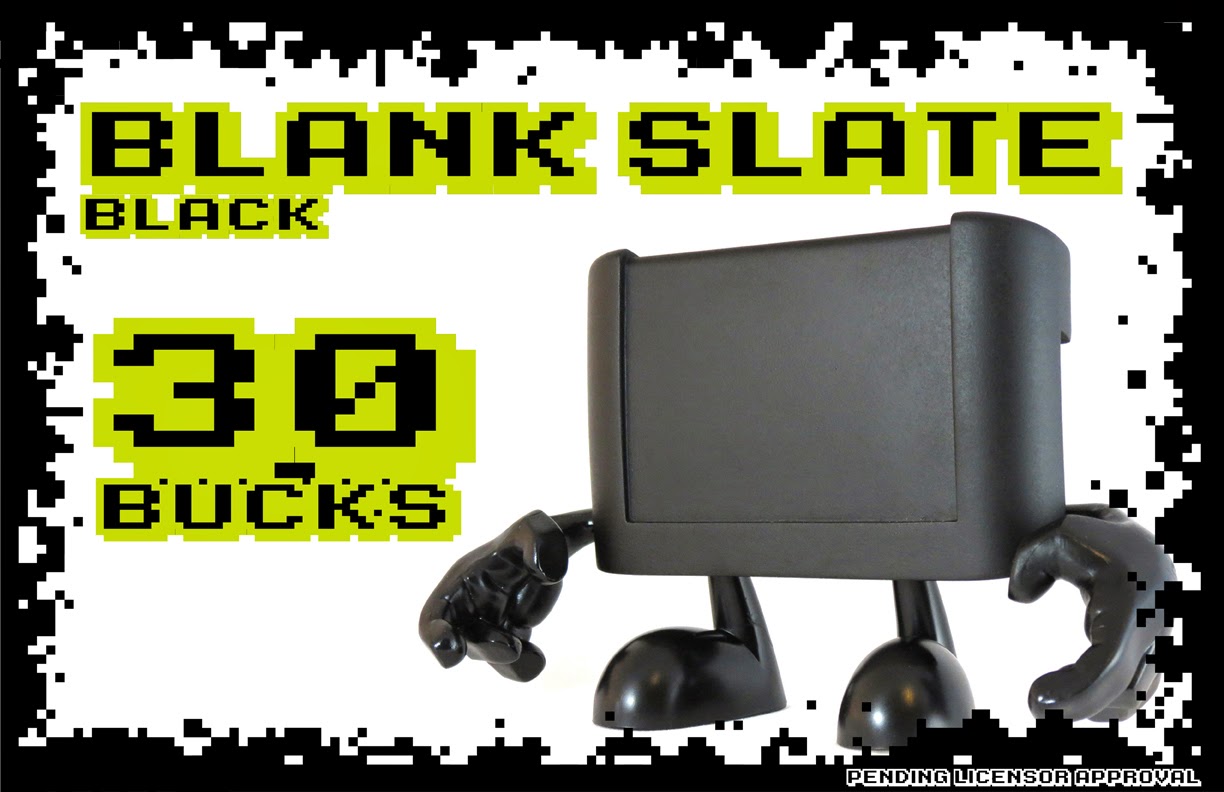 Why do a blank figure? Because this is an "officially licensed" project, I'm not allowed to do parody or artist labels. It's completely understandable that Sega wants to promote their classic games with their own classic art. Blank figures still give people the chance to create their own interpretations of classic games or create a brand new game label. 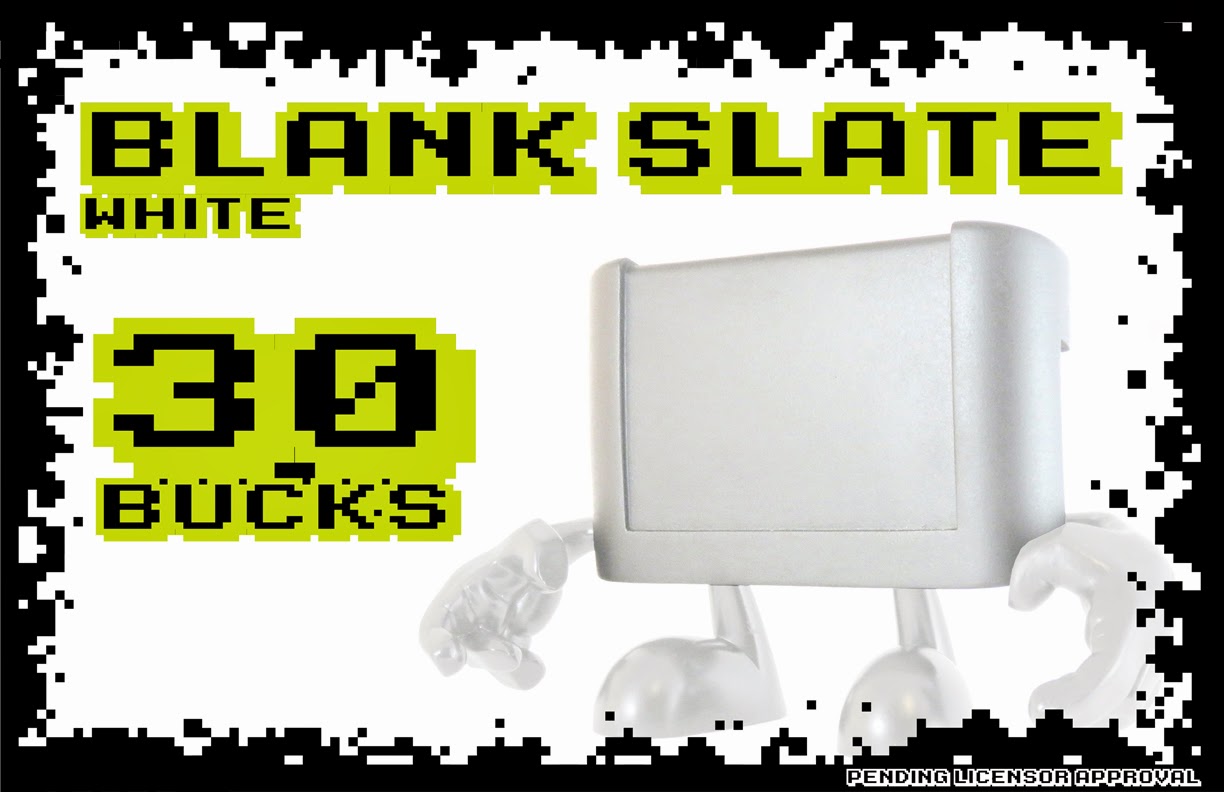 Why do a white one? There weren't any white Genesis cartridges, but the majority of DIY figures come in white. It's a good base color to start with for customizing, even though you should still primer it. It also gives you a chance to put white arms and legs on a black figure, or vice versa. 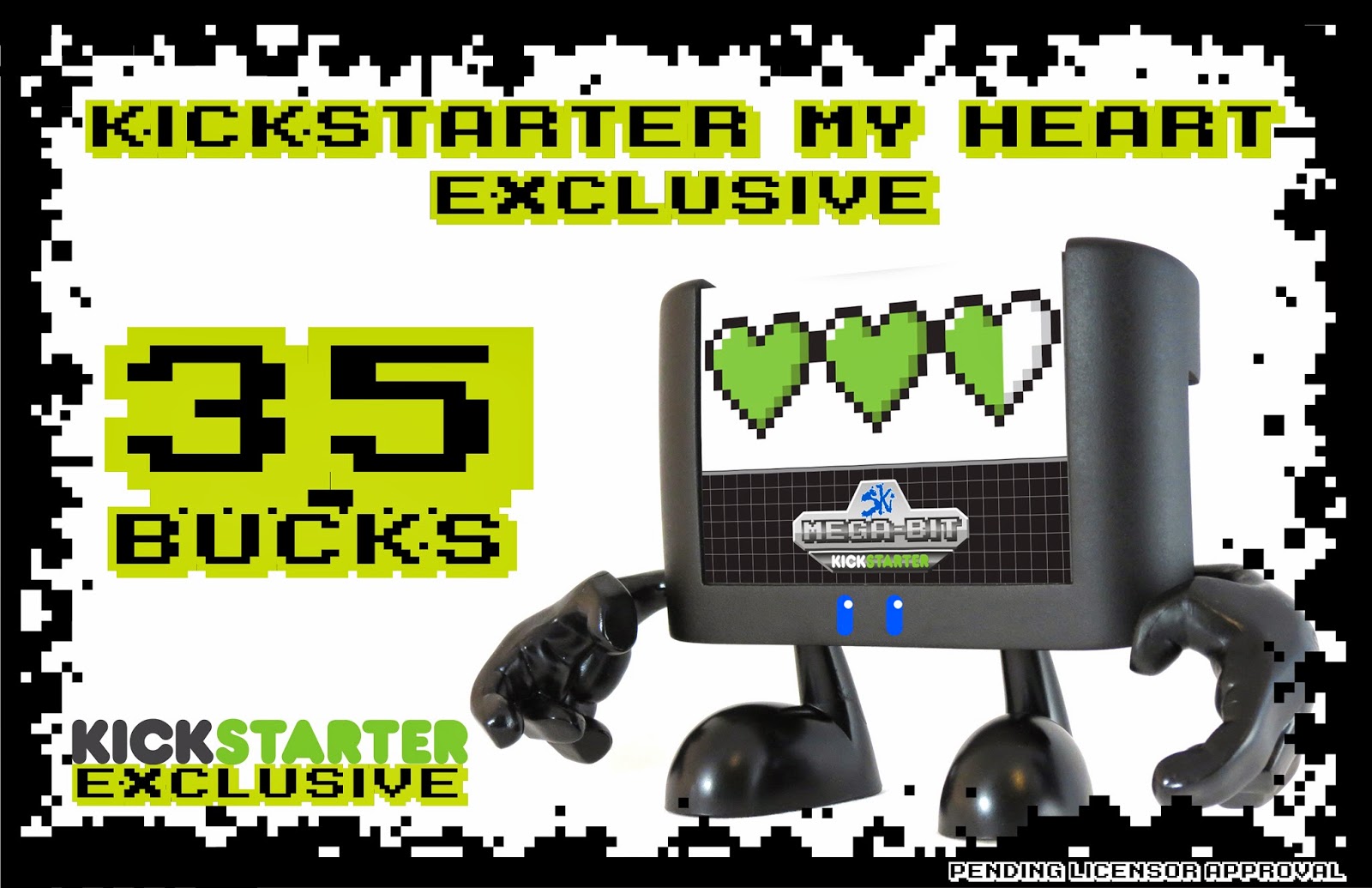 I wanted to offer a version that would fit in with the all the Mini 10-Doh! Kickstarter figures out there. Sega was nice enough to let me do this, even though it's not a classic game. Of course, I also had to change the Sega Genesis logo, but that's fine by me. 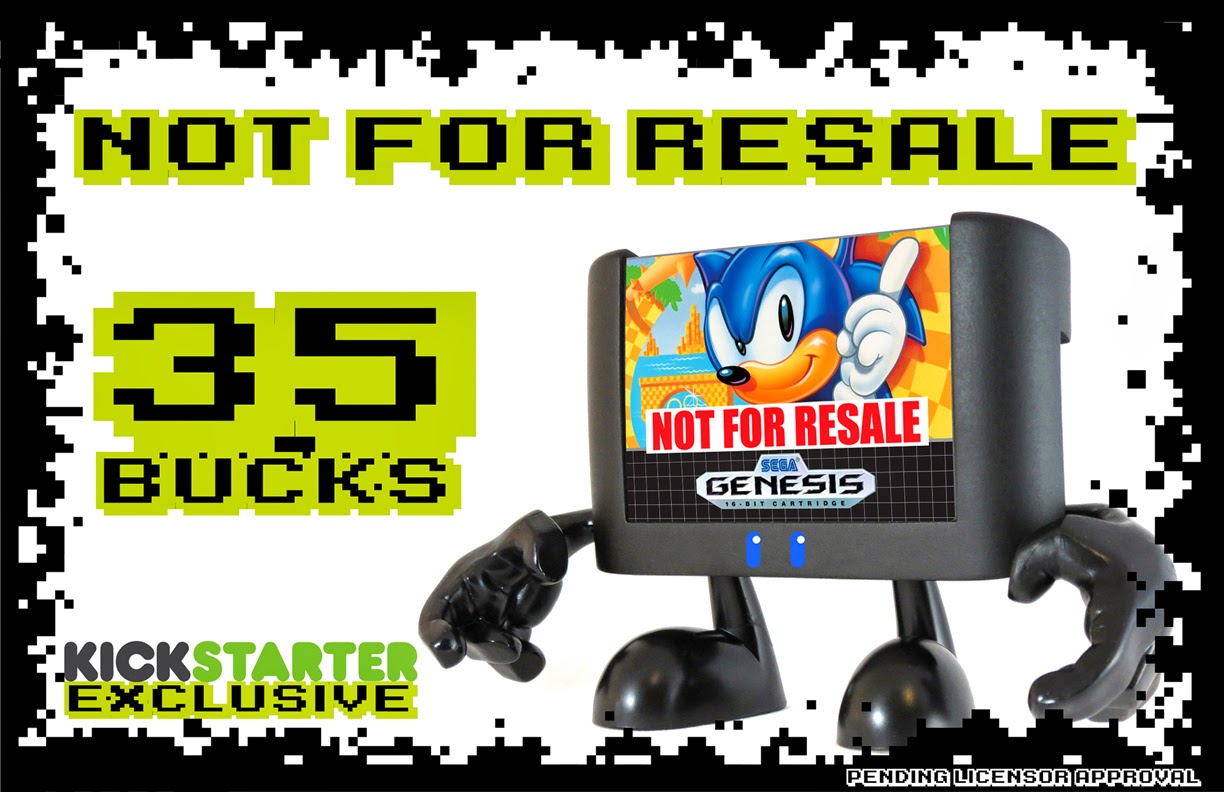 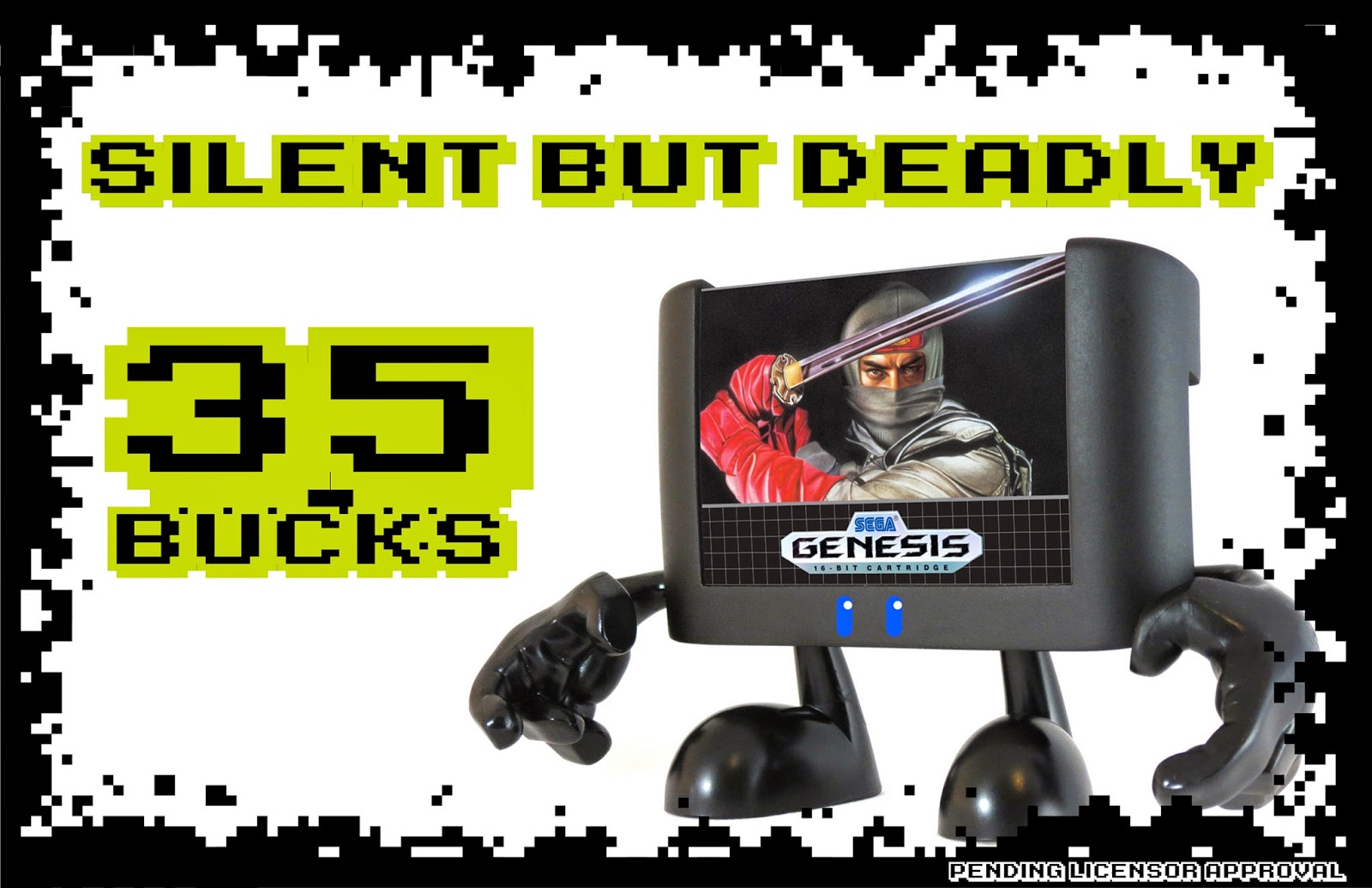 I only played the original Shinobi in the arcade, but that came out on the Sega Master System, so we had to go with the sequel. Still an awesome classic game. 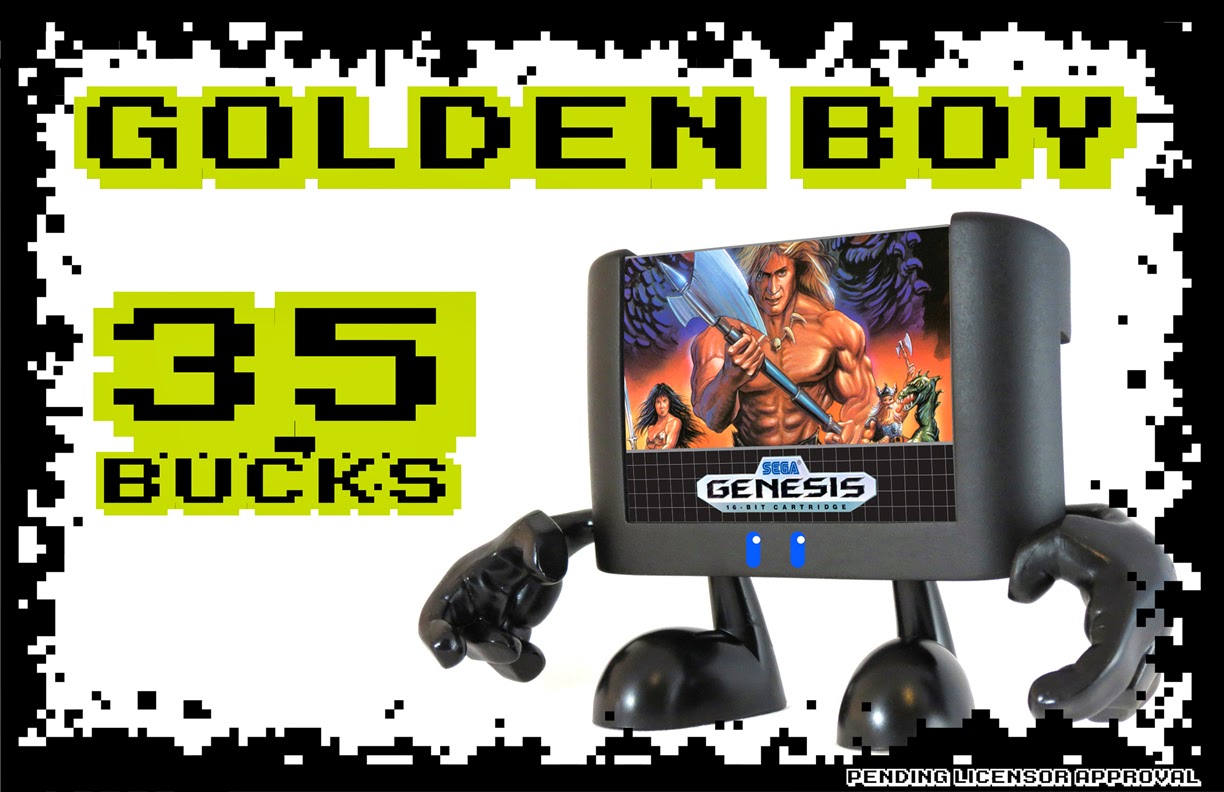 My personal favorite. My dad, brother, and I spent a ton of time playing this in arcades. 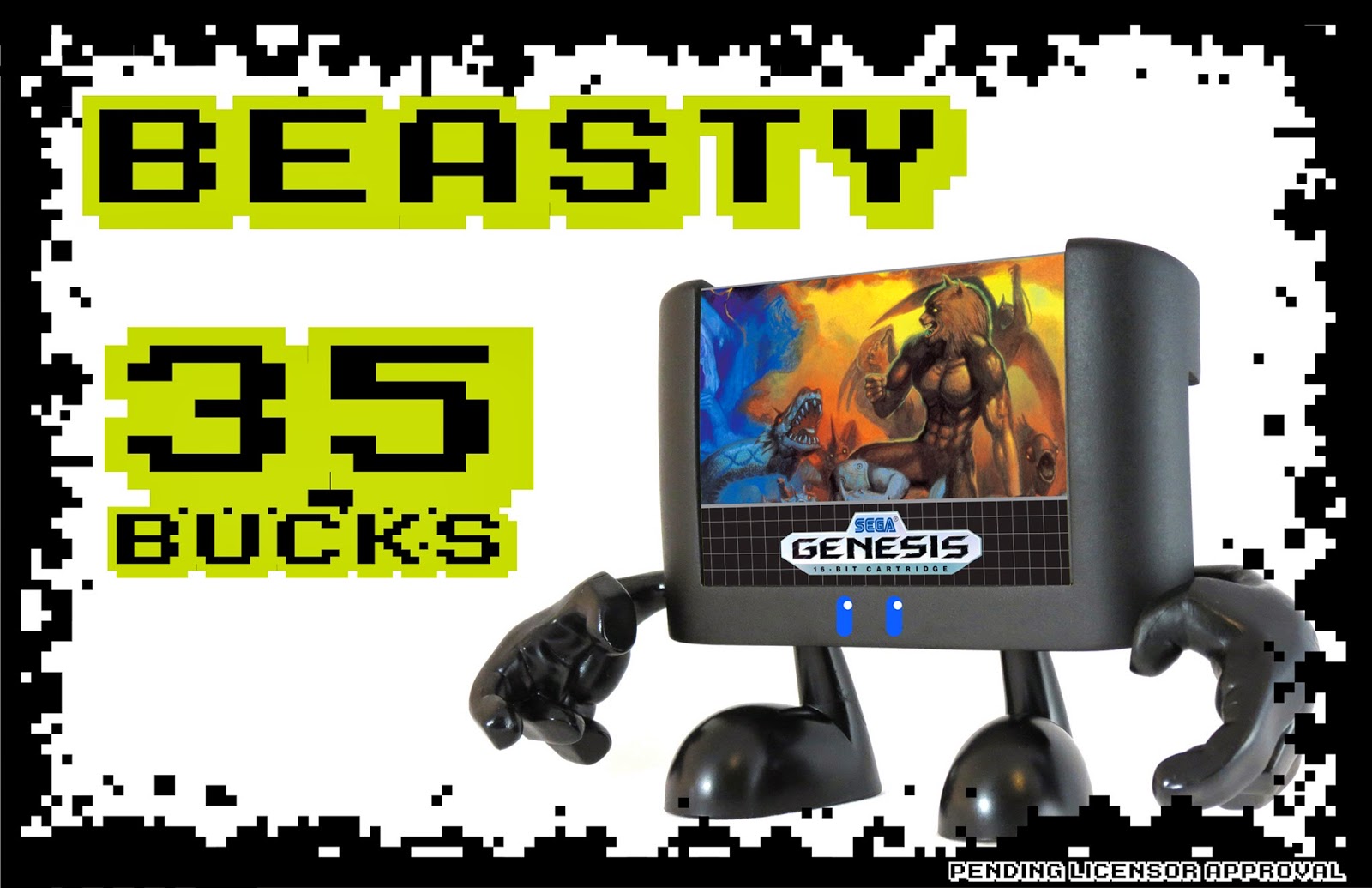 My 2nd favorite game, but so tough. This game was a quarter thief in the arcade.

These 25th Anniversary versions are VUM (Vacuum Metalized) figures, that means they are super shiny. It's an additional expensive process, but looks great. They'll also have metallic labels and will only be available during the Kickstarter campaign. 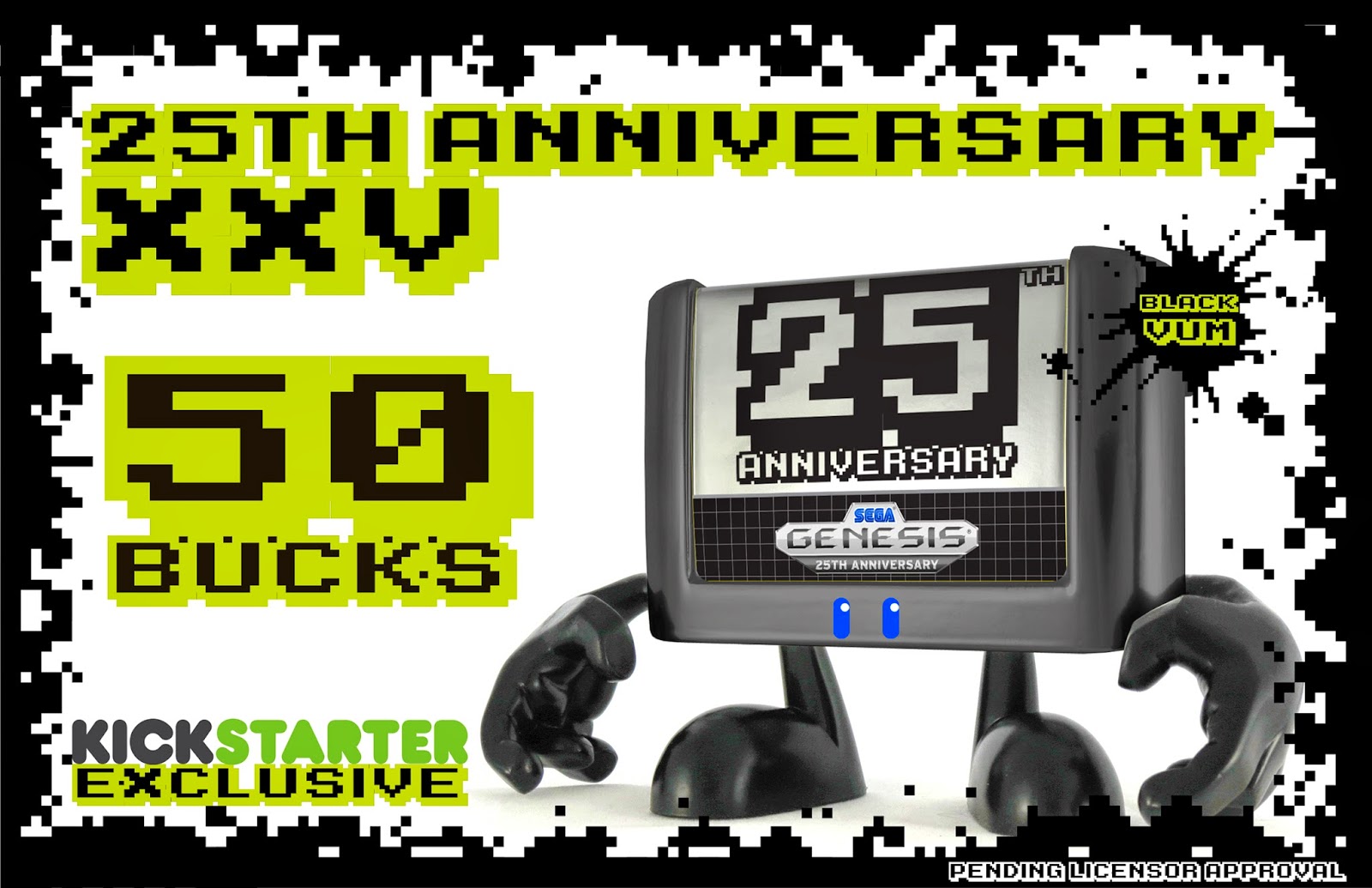 To me, this is the "Flagship" version of Mega-Bit. We're creating this product to celebrate the 25th anniversary of the Sega Genesis. Most people will gravitate towards their favorite classic game, but this represents the project as a whole, to me. 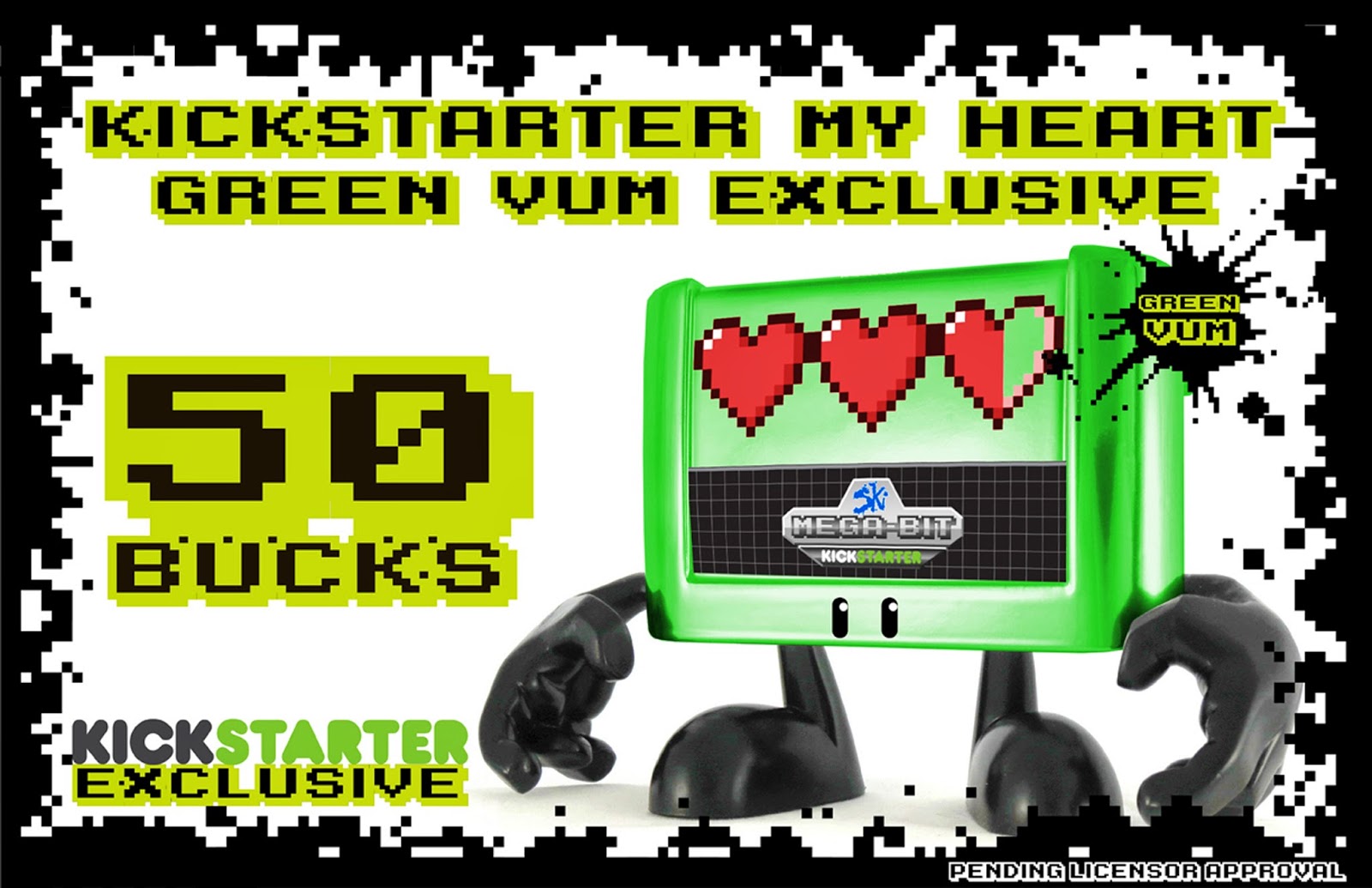 Like I mentioned before, I like things that remind me of my contribution to a Kickstarter. This guy is green solely because that is part of Kickstarter's color scheme. 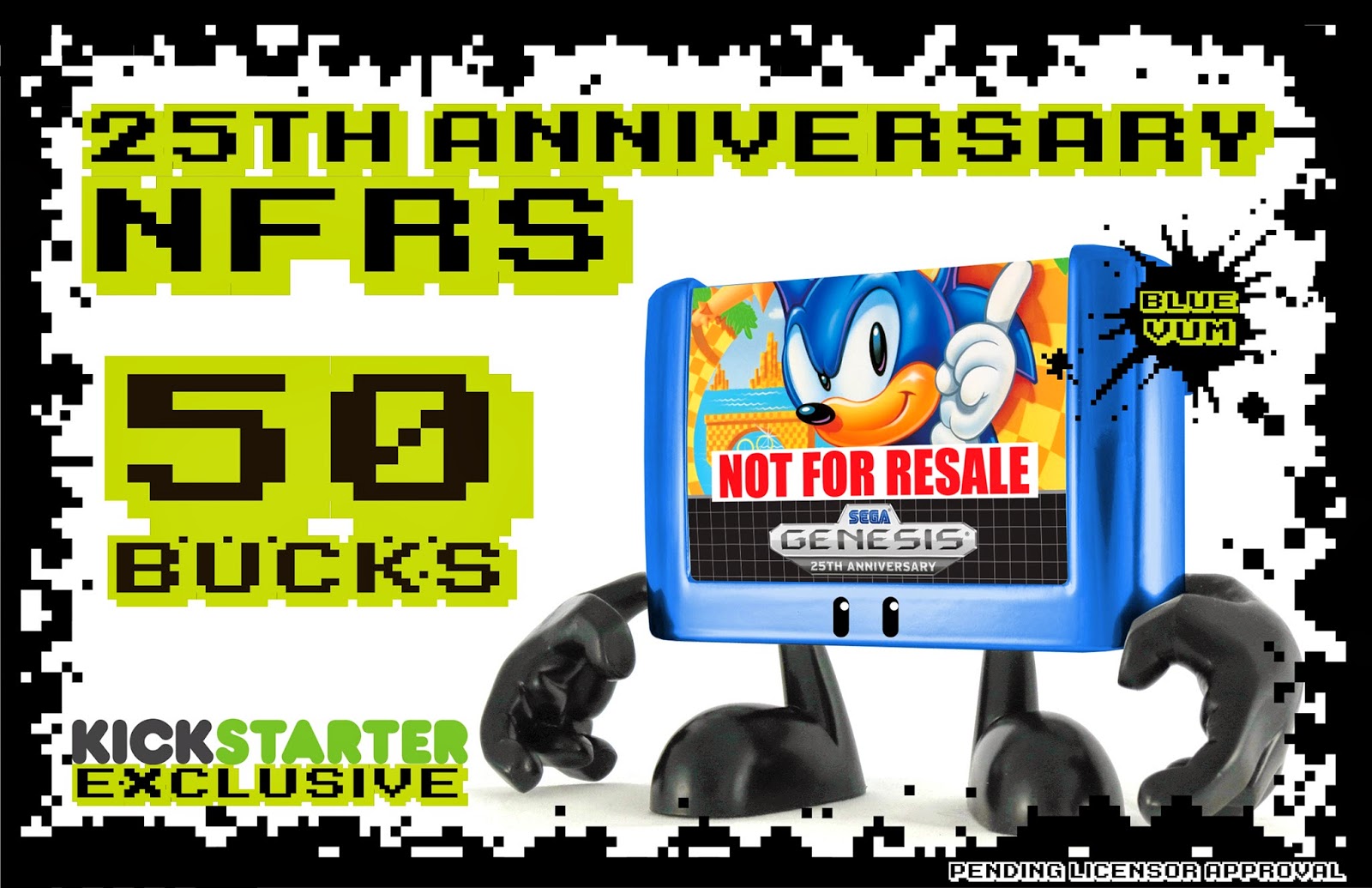 Why blue? Cuz, Sonic is blue. 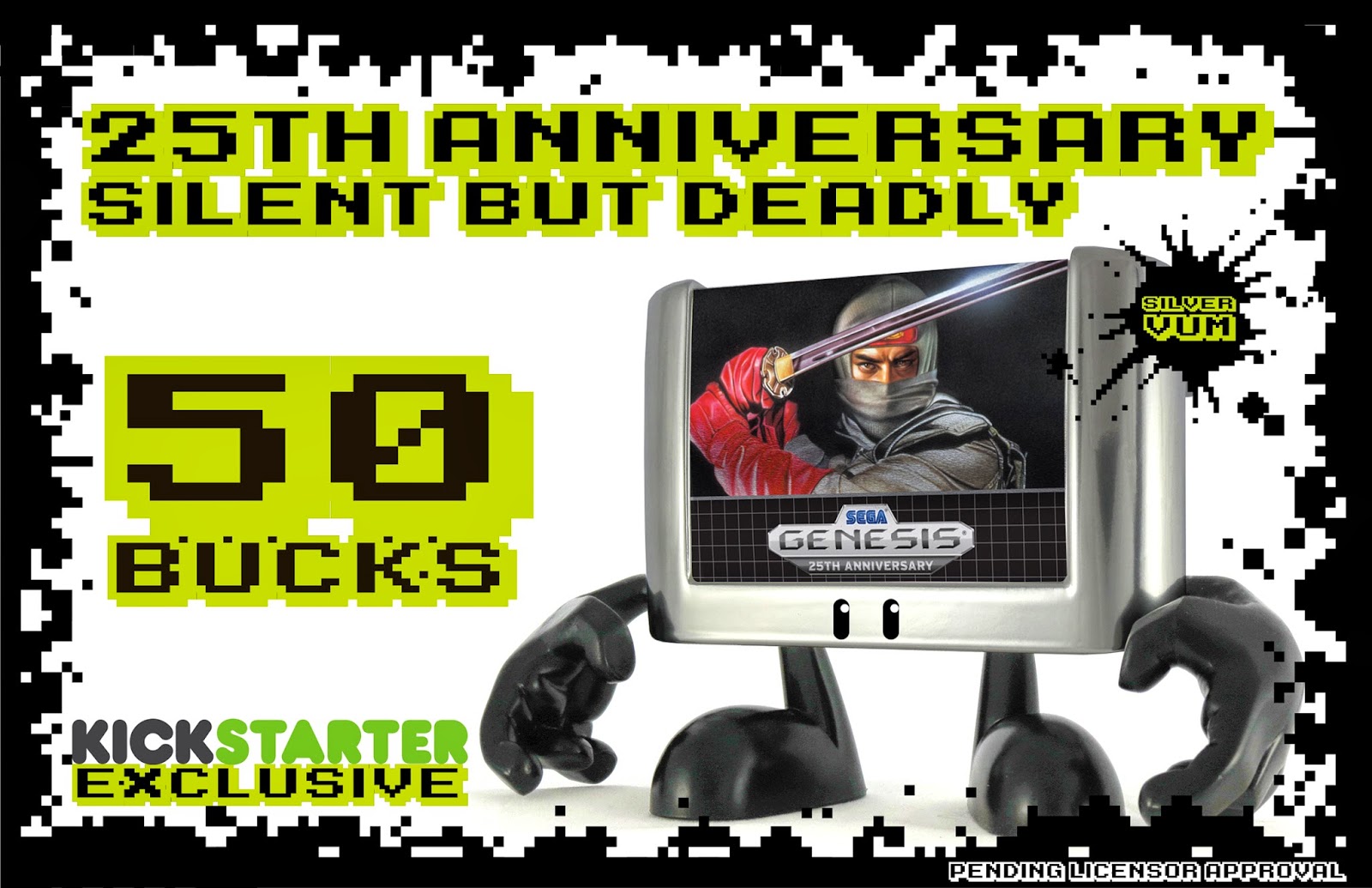 Why silver? Cuz the guy is in a white ninja outfit, and shiny white is silver. 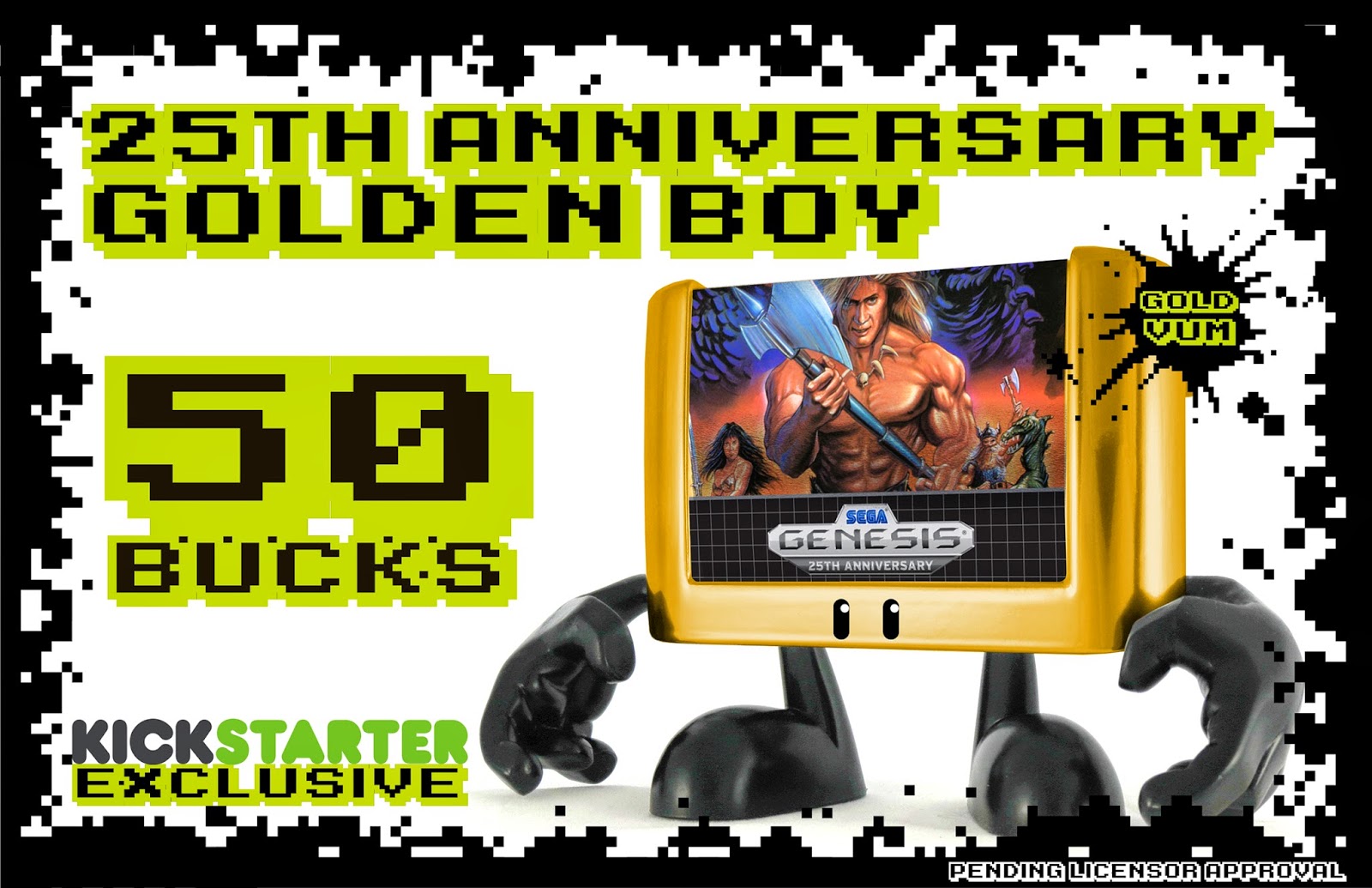 Why Gold? Uuuuummmm? This one is pretty obvious, like Sonic. 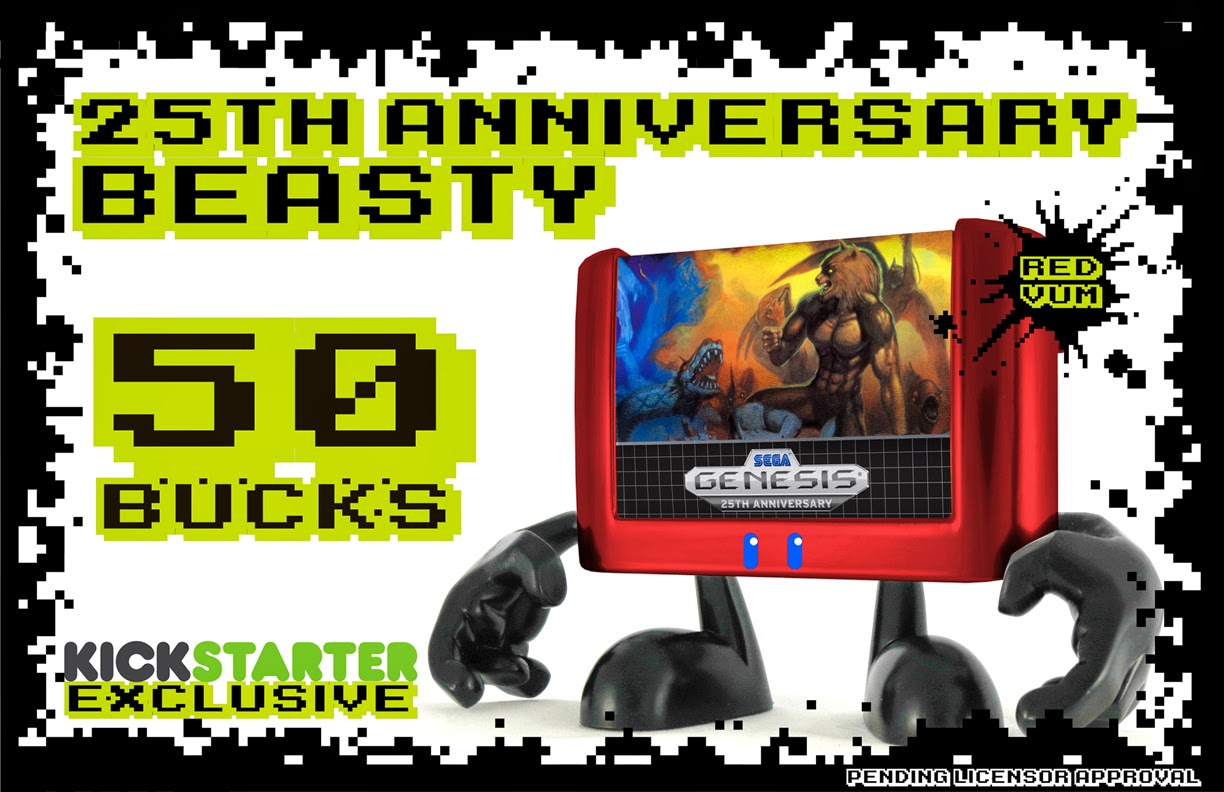 Why Red? Well I thought the red could represent blood, or the fire that happens during the transformation scenes in the game. 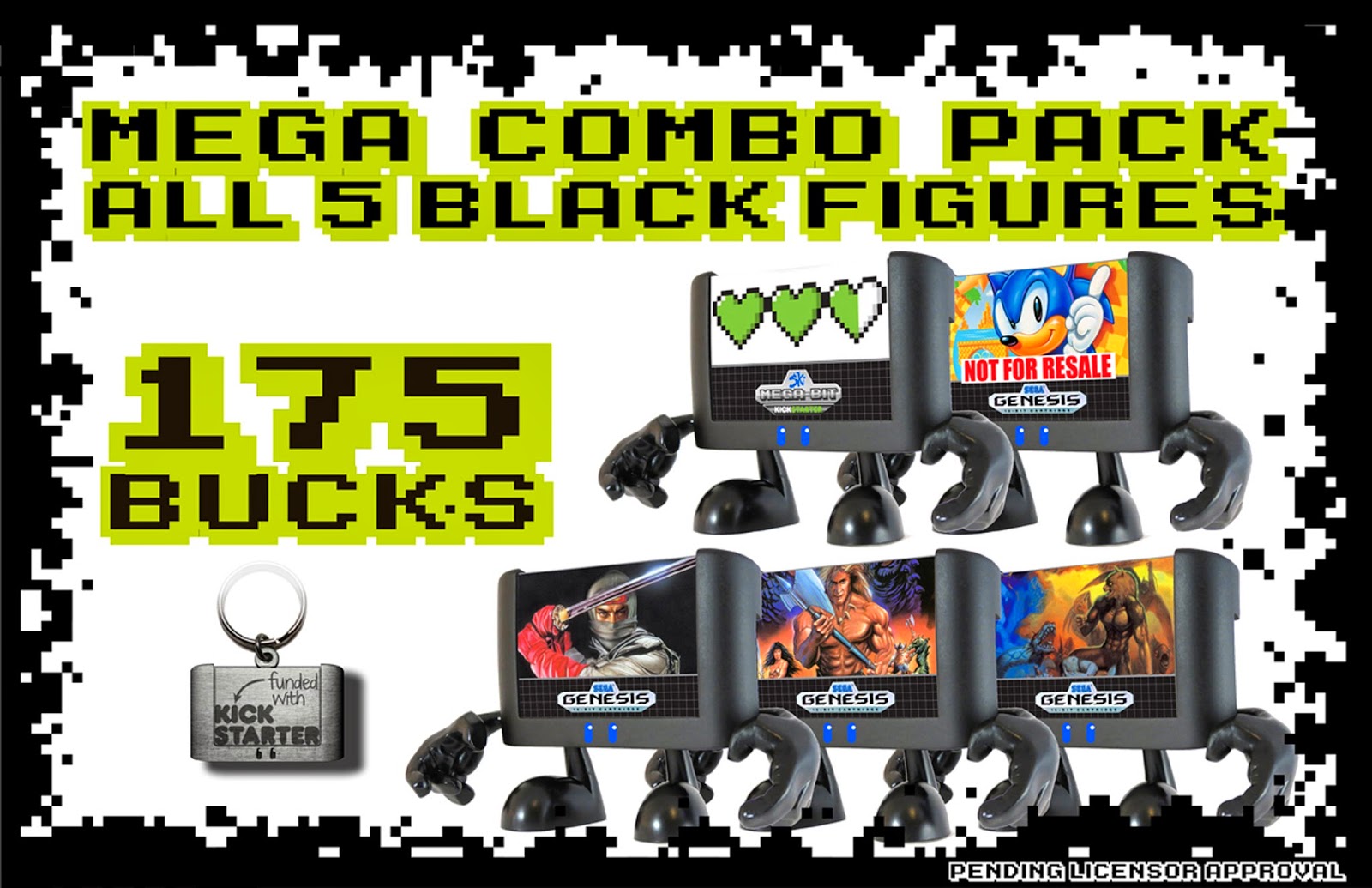 Here's the best way to get all the classic black versions of Mega-Bit. You can also add any one of these to any other pledge level. 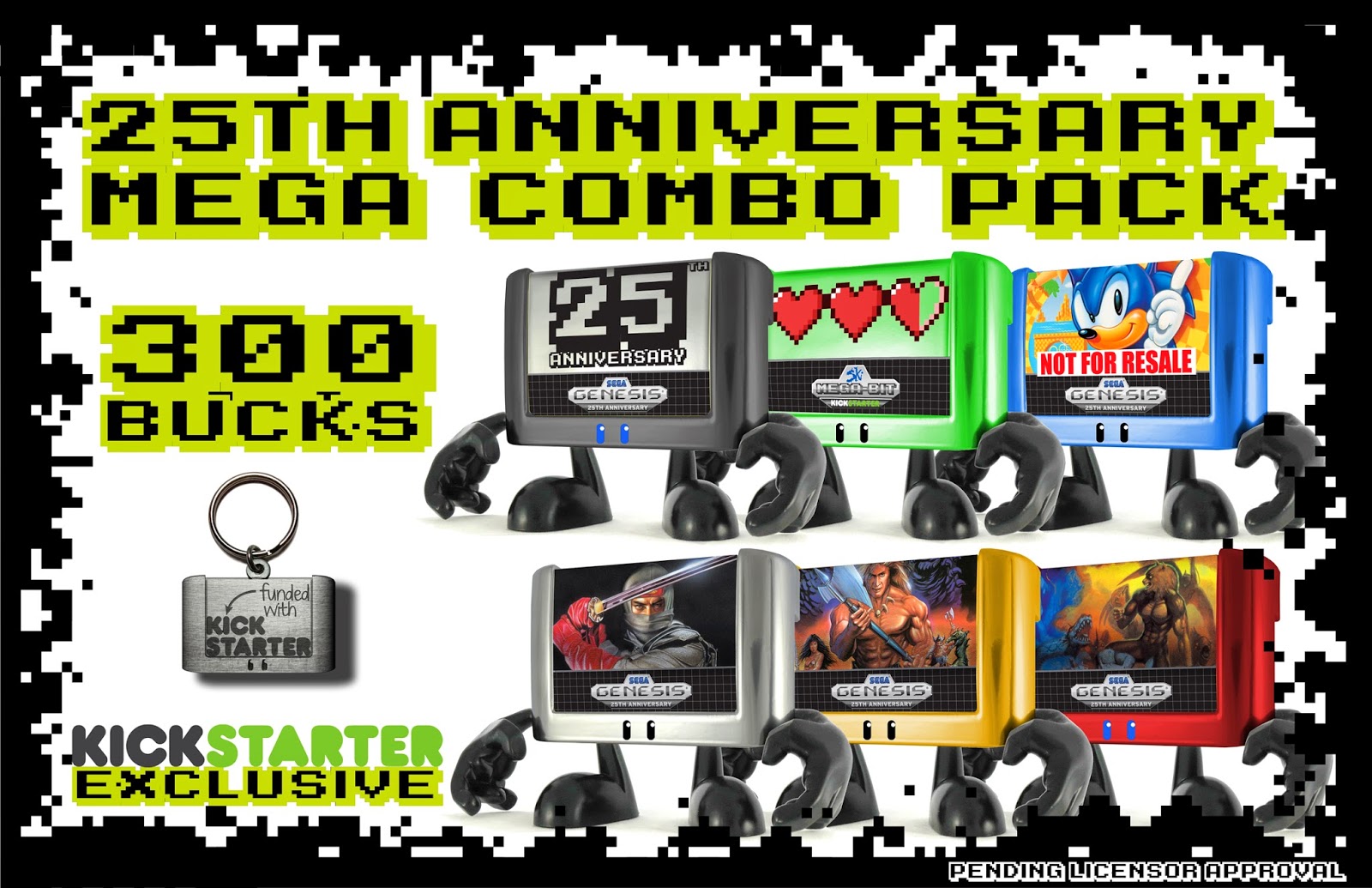 This is the cheapest way to get all of the 25th anniversary versions of Mega-Bit. You can add the XXV Mega-Bit to any pledge, but all of the others have a strict limit, so you have to pledge for them individually. 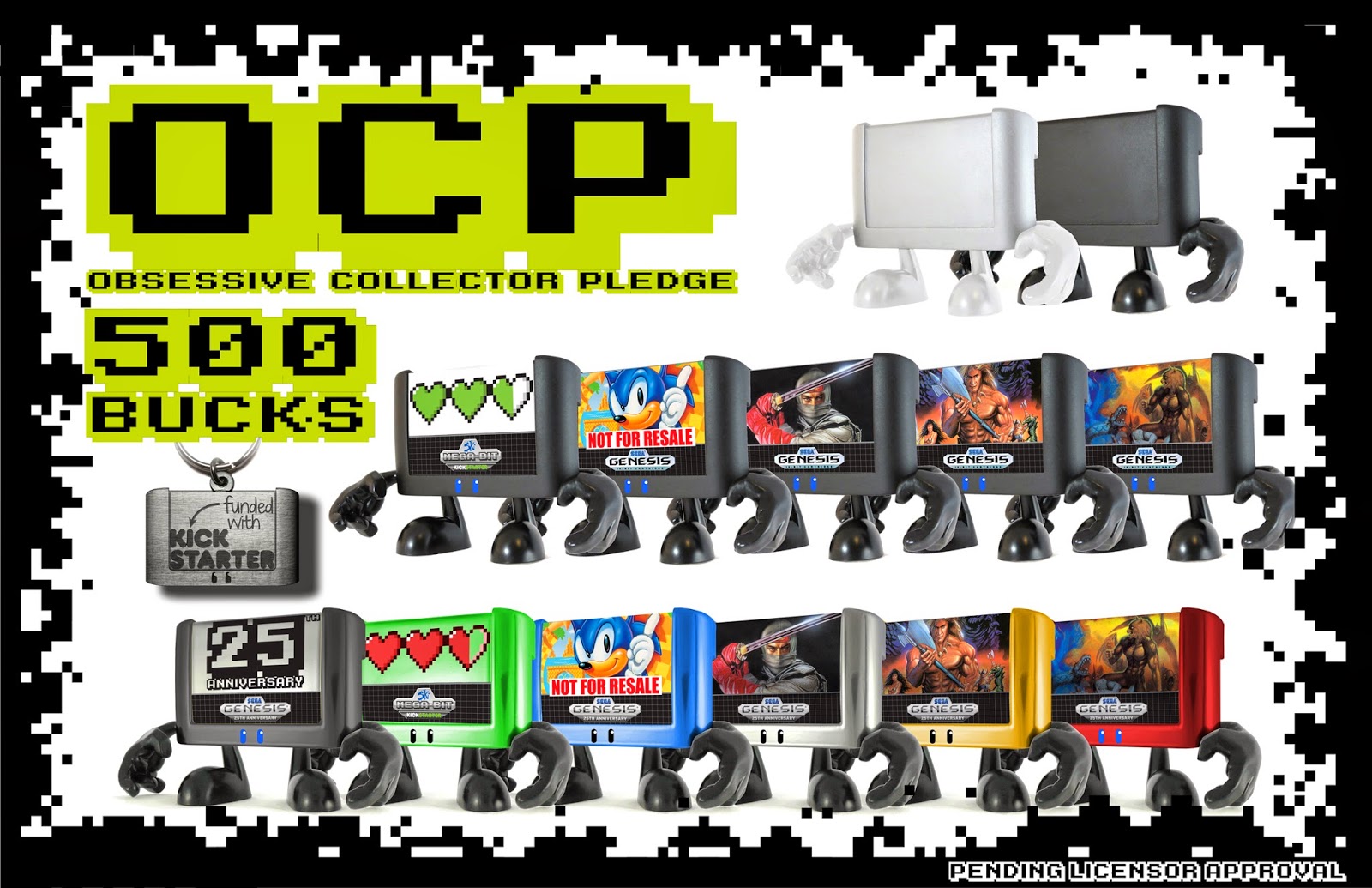 I'm huge Robocop fan, so I include an OCP level in a lot of my projects. This level is for people like me, that just want everything and not worry about missing out on something. 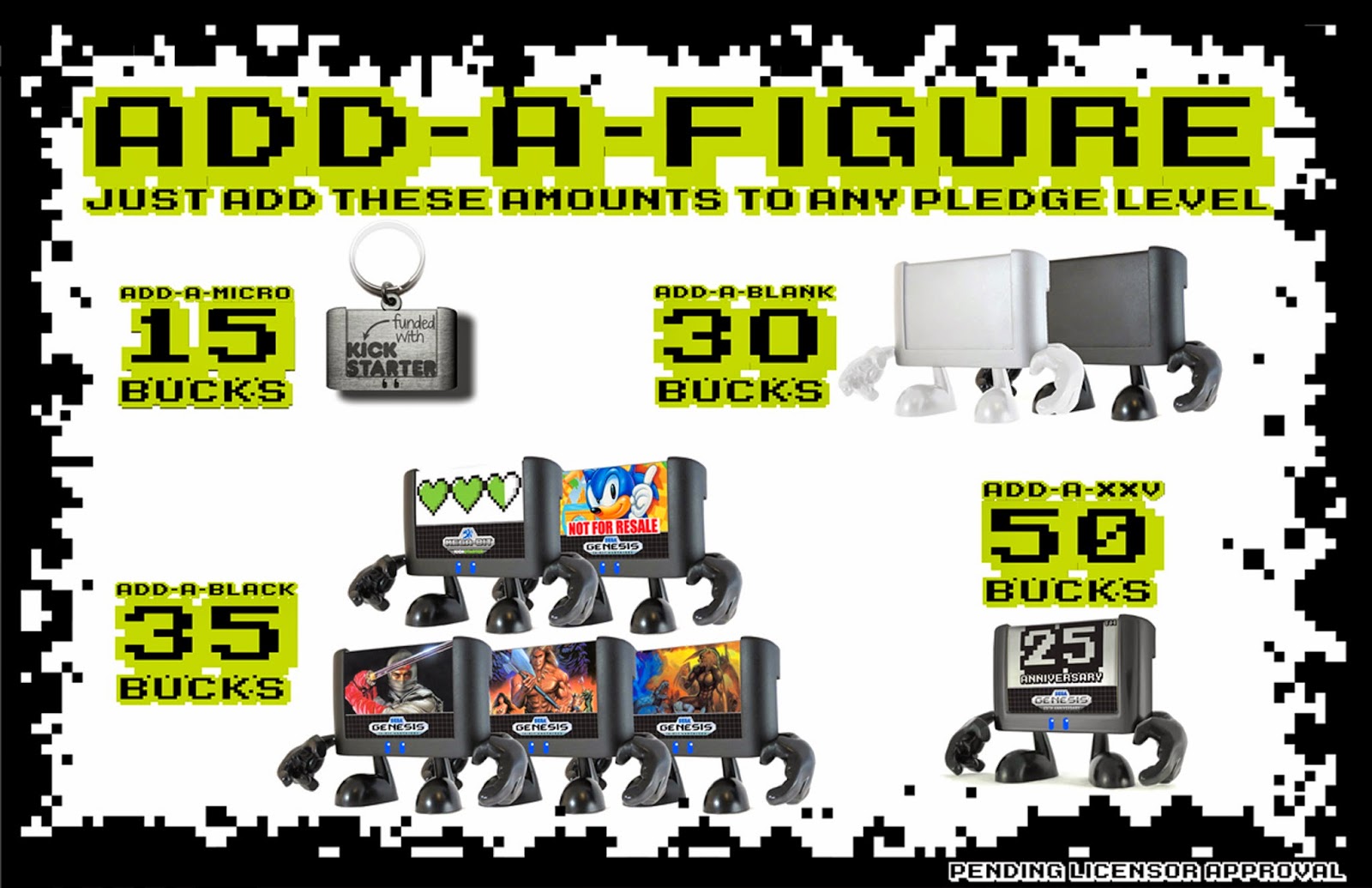 Add-ons aren't straight forward on Kickstarter. You have to "Manage Your Pledge", increase your pledge amount to cover the additions, then list your add-ons when the survey is sent out.

A lot of people don't understand why these figures are so expensive, so I thought I'd give a little insight on that subject.

Just like the Keychains, these figures take a lot of time and money to make. I modeled the figures, paid for output, clean up, molding, and casting resin out of my own pocket. All of that time, money, and effort has to be spent before I can even launch the Kickstarter.

Working with Sega has been a challenge. They are a huge corporation, and I'm one single person. They have their processes and procedures, I don't. After one failed attempt and a really long dead period, we were able to agree on the basic terms for the project. Meaning, I only get to make the figures if the Kickstarter is successful, and I don't have to pay the royalty until after it's been successfully funded.

Unfortunately, that "dead period" ate away a big chunk of 2014 (the Genesis 25th Anniversary), so I had to empty my checking account to pay for the tooling to get started in China right away. I felt that was the only way to be able to get this project done in time. A huge risk on my part, but I have to look at this whole project as an opportunity and not a risk.

Some people wonder why the figures cost so much and why I need so much money to fund the project. The 30K goal will only pay for the tooling, the royalty, production, ocean freight shipping, and shipping rewards. It doesn't cover any of my time, effort, or the prototyping expenses. I also hope to reach some stretch goals to improve the figures even further.

I've said enough for now, except Thank You to everyone that has already contributed. Thanks for supporting the project and please keep telling people about it. 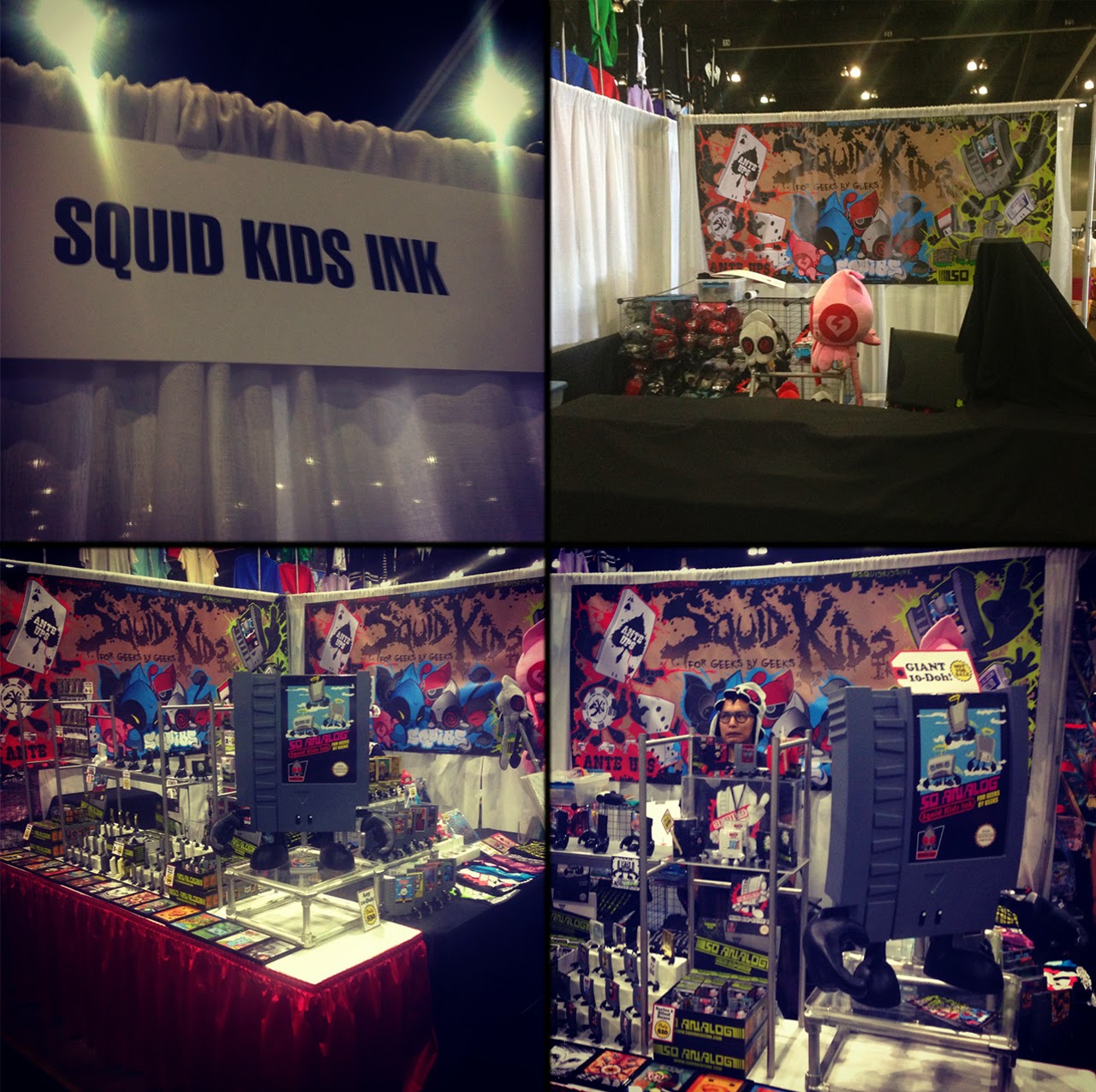 This was our 6th time exhibiting at Anime Expo in Los Angeles Convention Center. AX was the 1st con we ever exhibited at. I'm not sure why we chose that one 1st, but we did and this year will be our last year. 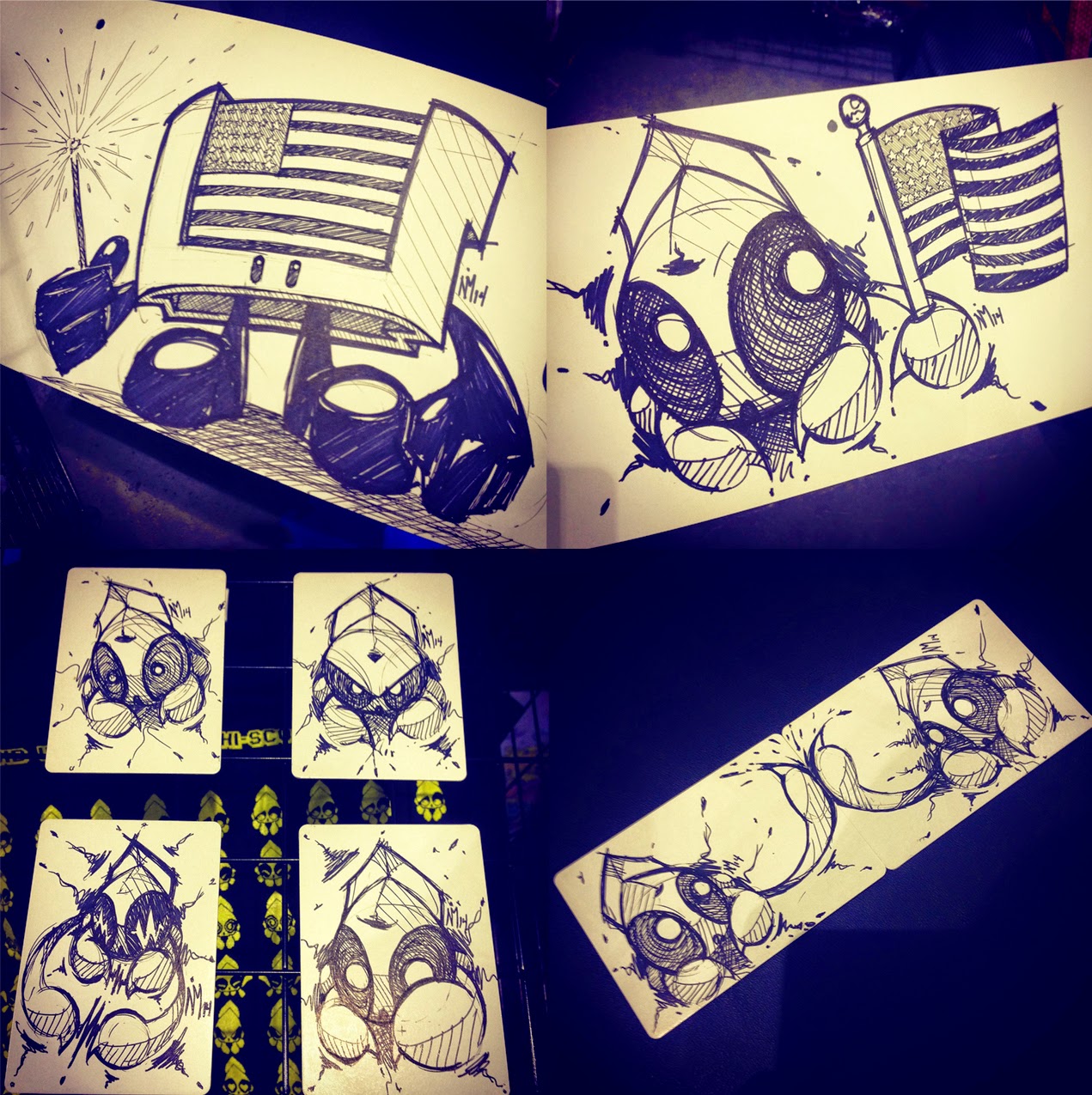 It always takes place over 4th of July weekend, which is good and bad. Most people get a 4 day weekend, so that's more time for them to enjoy the con. Unfortunately, it also means we haven't had a nice 4th of July weekend in 6 years. We're already looking forward to relaxing next year.

One of the reasons for releasing Squibpool at AX was because red and black are the colors of AX. Unfortunately, my resin stuff is pretty pricey and most of the attendees don't understand why. 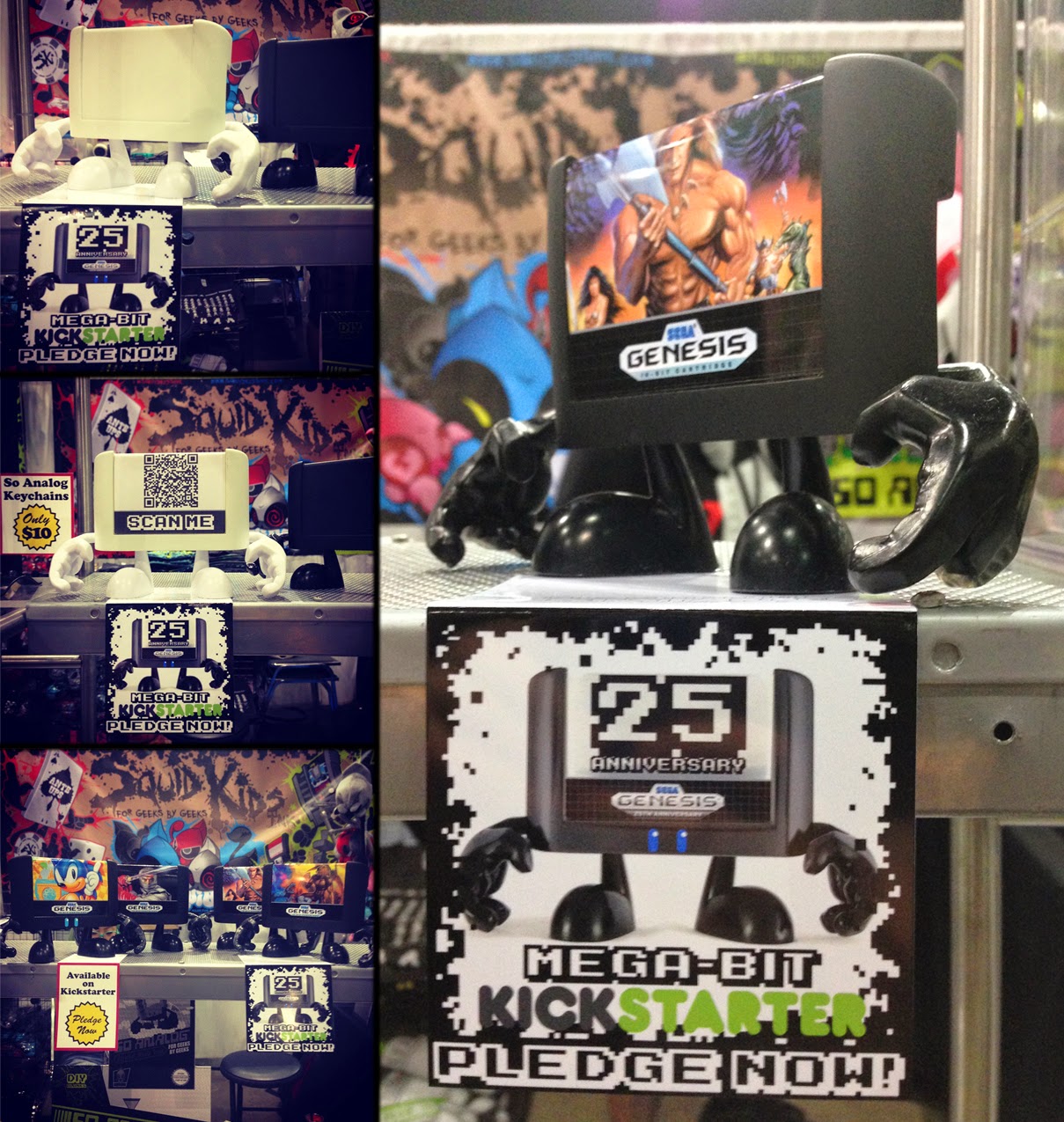 I finally launched my Mega-Bit Kickstarter campaign on setup day of AX. Doing both was hectic, but it was a good chance to show off the prototypes and explain the project to people. You can check it out here and hopefully back it.

For years AX was one of our best shows, but last year it took a heavy dip and this year wasn't much better. It's sad to choose not to do a local show, but I think it's probably for the best. I'll definitely miss the friendly faces and long term supporters. Hopefully we'll still see most of you at Wondercon, SDCC, and Dcon. Maybe we'll return once I'm able to develop Squibs more. The crowd seems a bit young to really appreciate what I'm trying to do with So Analog.