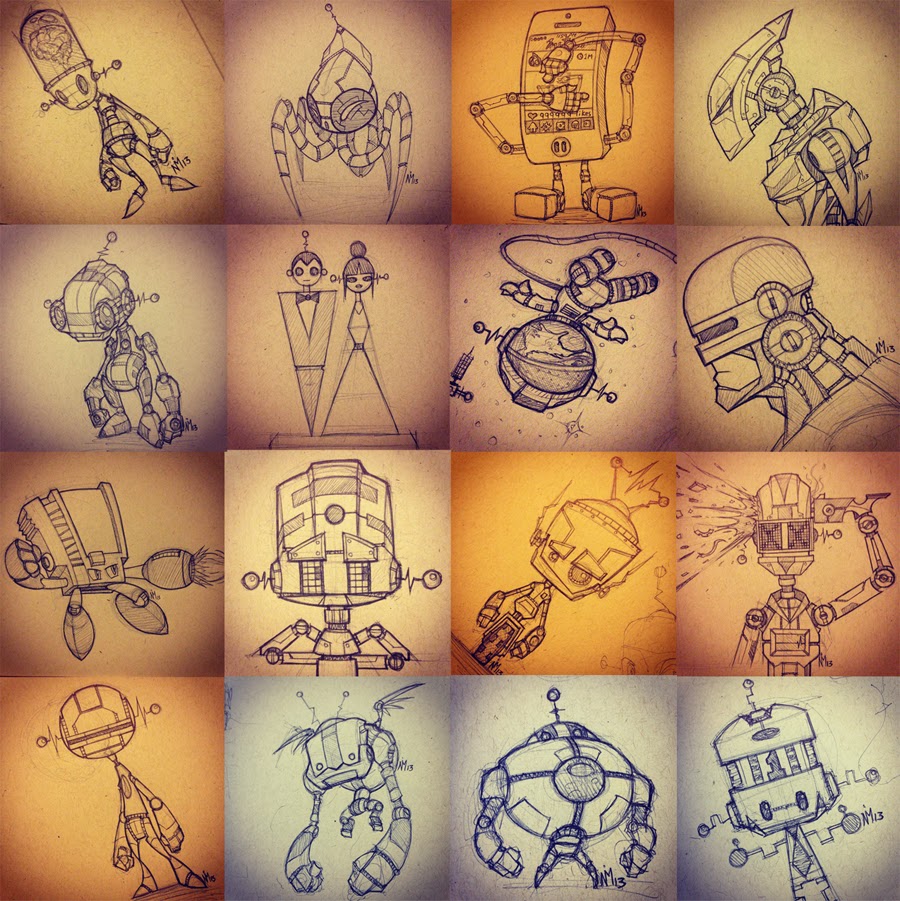 I started doing daily sketches half way through Inktober/Botober in October 2013. I was mainly doing Botober considering I only drew robots, Ha. I always draw in ink, so using pens for Inktober isn't much of a challenge. I can't remember the last time I used a pencil. It had to be back in school, so 10 years ago.

I would have loved to have a consistent set of sketchbooks, but it was simply impossible. I love the small brown sketchbooks in the picture. Unfortunately, the manufacturer completely changed their paper quality at some point. It's now super smooth and has a fake texture. I'll never use them again, boo.

I used a range of pens through out the past year. My stock pile of my "old" favorite Jimnie Light pens ran dry, but I moved on. I currently use Tul pens, which are completely different and unforgiving. Sharpies are also fun to use. I really like the range you get out of them as the die.

These are essentially the 1st and last batches of Squib sketches for now. I started with the 4x4 recap image, because that's how the Botober sketches worked out. I quickly changed to a 3x3 recap, because I thought over 2 weeks between recaps was way too long. It has bugged me this whole time, and you'll see why in the images below. 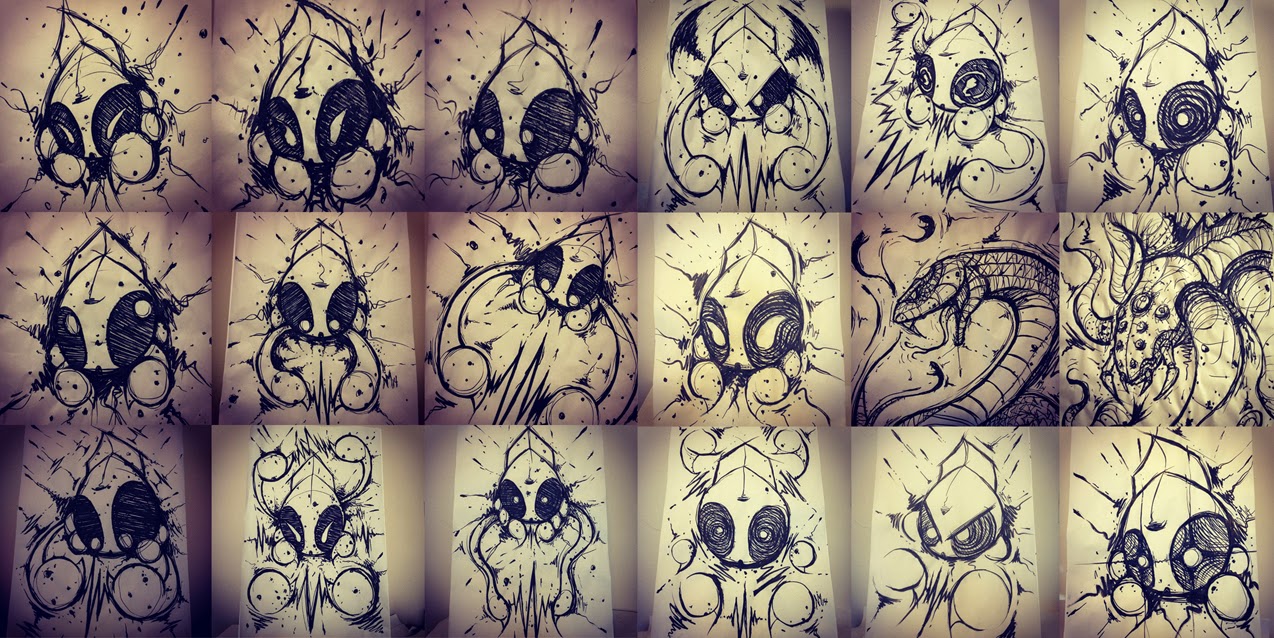 In addition to the daily sketches I tried doing some ink paintings on some scroll paper I bought on a trip while in China. I've never been a painter, and ink is even more unforgiving than paint. It's such a hard medium to control, even if I wanted them to look sloppy. Ugh. 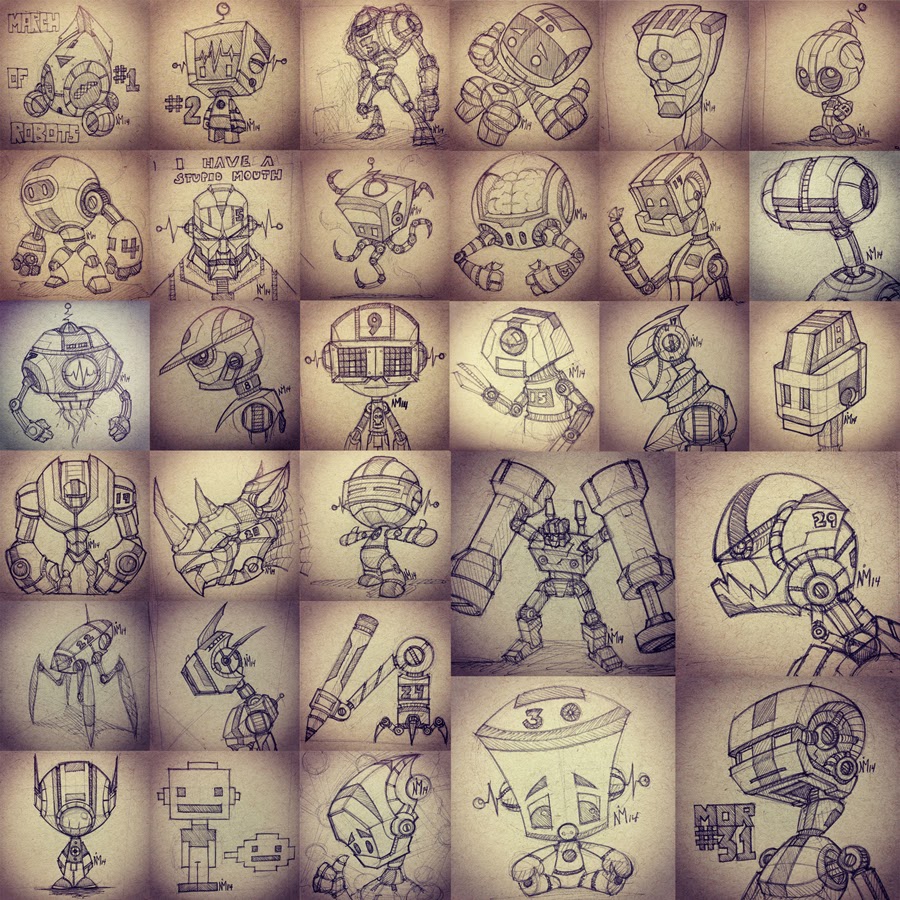 I decided to participate in March of Robots to help support Dacosta's Kickstarter for his March of Robots book. These are the 31 sketches I did, but part of me wishes I hadn't. Only because I later realized I really wanted to reach 365 Squib sketches, and this ate into that total by 31 sketches. 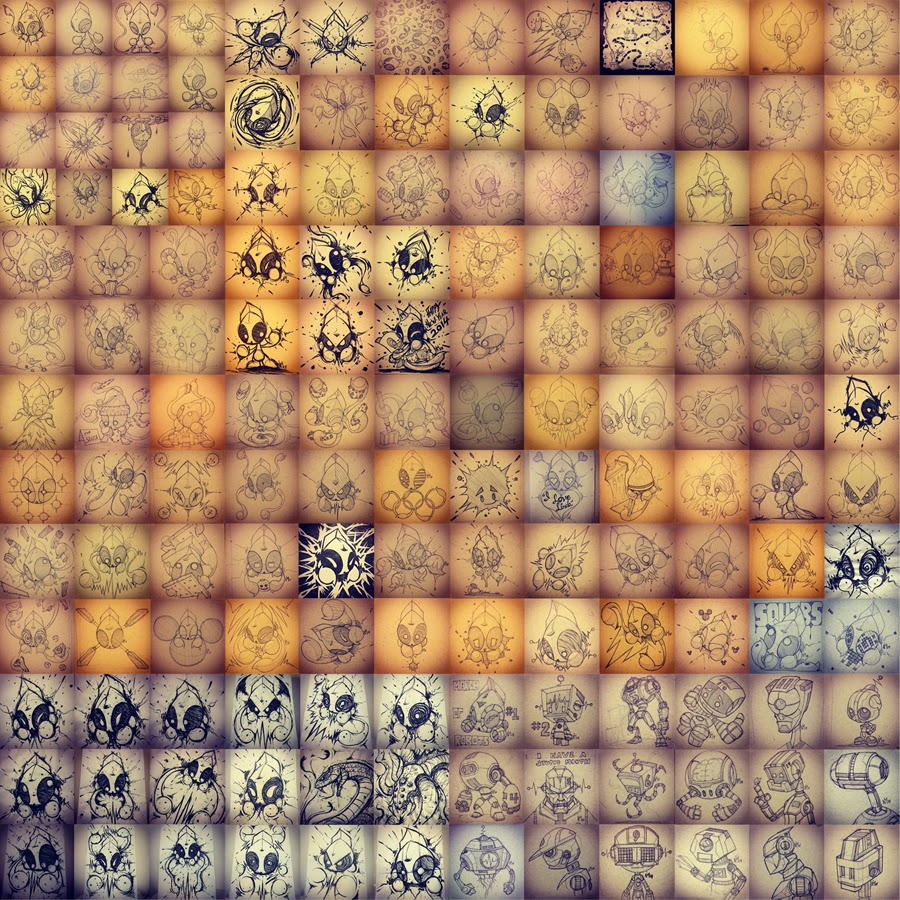 After March of Robots I wanted to see a group shot of all my sketches so far. This is really a 4x4 square of the batches of 9 sketches. Of course the 1st batch of 16 Squibs throws off the perfect 12x12 square look, but I couldn't leave them out. I did leave out the 1st 16 robots though. 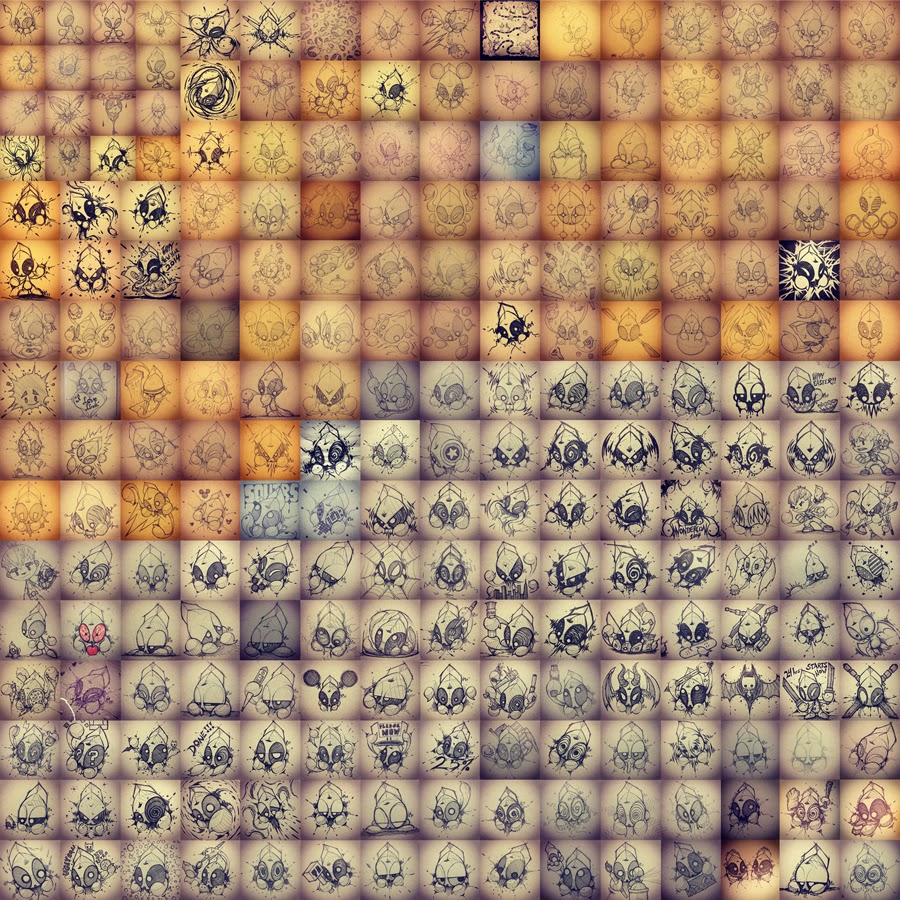 This is a 5x5 of the Squib batches of 9 sketches. I only wanted to include Squibs in this square, but it took a long time to be able to do it. You have to add 9 batches of 9 to increase from a 4x4 to a 5x5 square. That ends up being 81 sketches, or almost 3 months. Yikes. 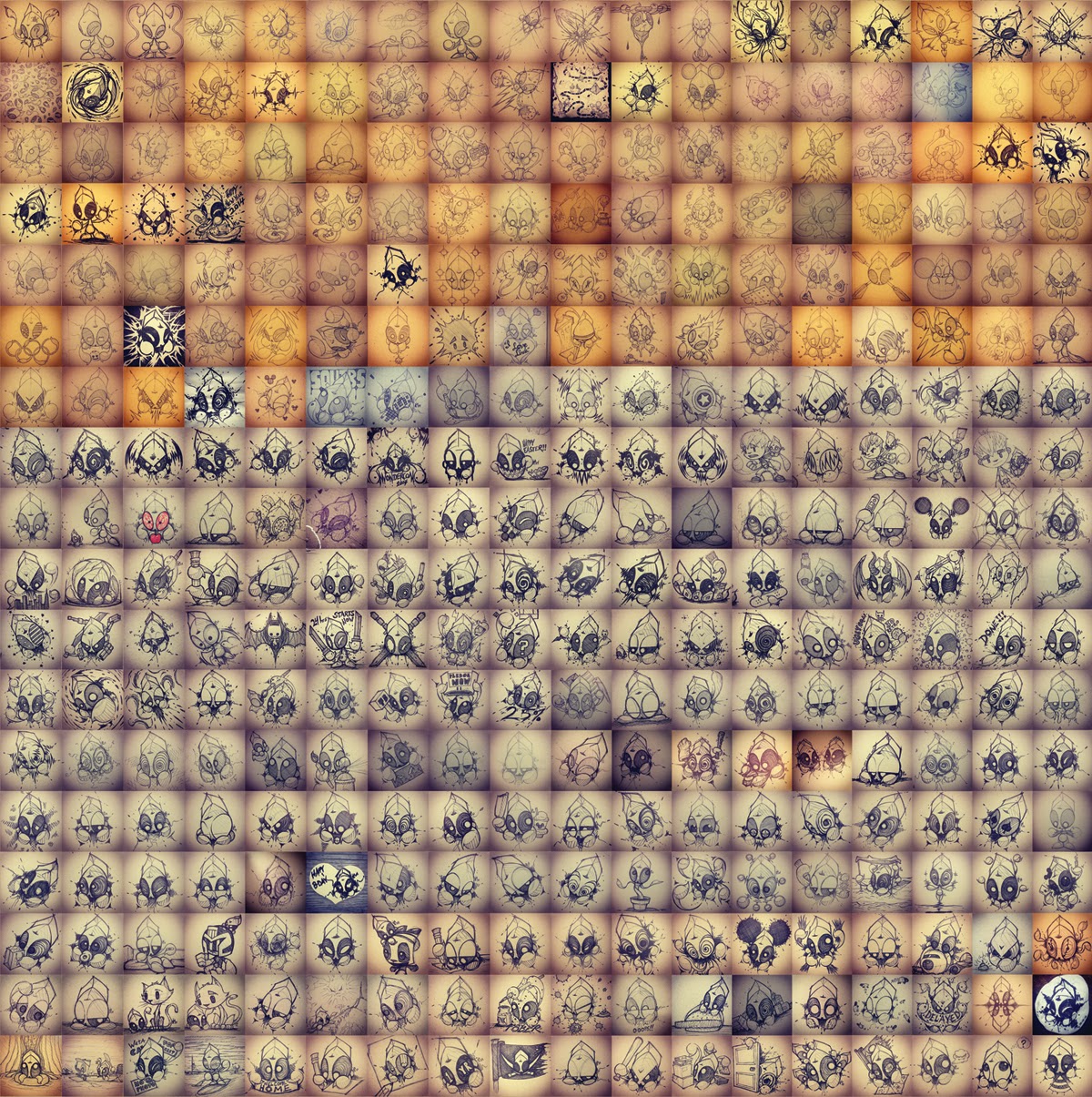 I have this thing with numbers. I want them to line up, or work out, or make sense, or something. I didn't really plan out this year long challenge of daily sketches at all. I just wanted to be able to complete it. At some point that changed, like I mentioned. I passed 1 year, but I only had 316 Squibs. I didn't have the desire to do an additional 49 sketches. I kept sketching to reach 365 Squibs, but 365 wouldn't make a perfect square anyway. So I created this 18x18 square of my 324 Squib sketches. I arranged them chronologically from left to right, then top to bottom. It allowed me to rearrange that 1st batch of 16. It also satisfies my weird numbers thing, even if it leaves out the robots, ink paintings, and a couple at the end.

This year has flown by and it's great to be able to reminisce through these sketches. Some people wish I would have done some more variety, other just Squibs. Buuut, that wasn't what I wanted to do. I did want to start telling more about the Squib story, but that didn't really work out. It's tough when most of these sketches were done late at night, just before passing out. I do plan on starting a new weekly challenge in January with almost daily teasers. We'll see how that goes, Ha.