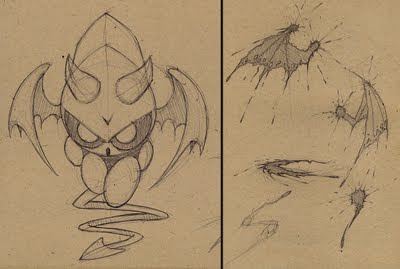 so, this sketch was intended to be a Devil Squib that i plan on using as a badge or icon in the storybook i'm developing. but at this point in time, Squibs aren't well known by the masses of people out there. so, removed the horns, wings, and tail cuz i didn't want to confuse all the new folks out there.

shirts aren't cheap to make, so i try to make the most out of the screens. this time i did 3 versions rather than 2. 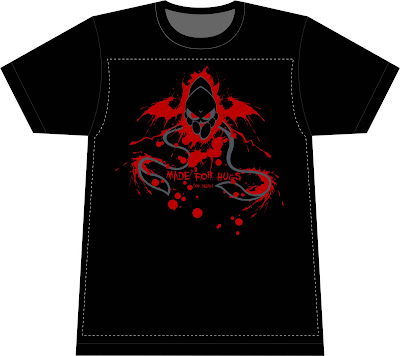 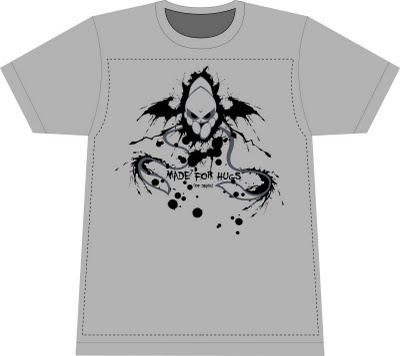 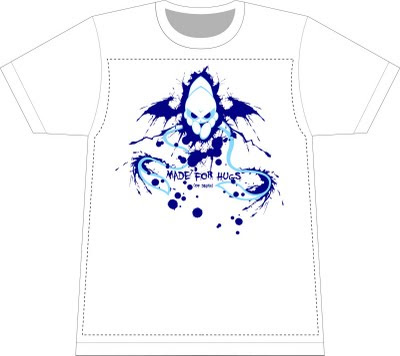 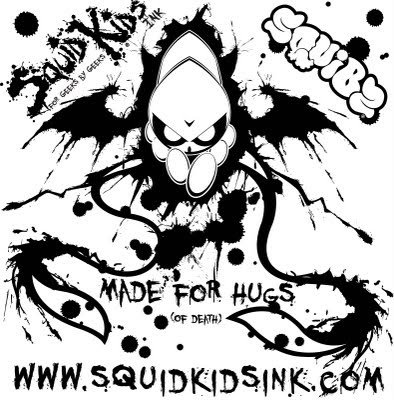 this graphic is for the internal tag. i haven't seen a sample yet, so hopefully it isn't too complicated.

these will be available for the first time at Anime Expo 2011 at the LA Convention Center. they'll still be the same low low price of 15 bucks. we learned a lot from our first time ordering shirts, so this time we ordered all sizes. everything from XS to XXXL. i'll put them up for sale on the website after Anime Expo, for the people that can't make it to the show.

i sure hope people like the new design, if not, i'll have plenty of new shirts to wear for a while. ha. 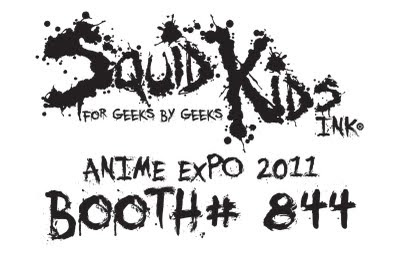 LA Convention Center July 1st - 4th
so, this will be our 3rd Anime Expo. i guess that means we've officially been exhibiting for 2 full years. Anime Expo was our first show and it usually goes pretty well for us.

once again, we'll be sharing a booth with Hyperactive Monkey. still gotta keep those costs down. we'll have all of our Squib stuff as well as some So Analog stuff. This will be the last show that we have our 10-Doh! resin available. i have a very small amount left, so if you're in to limited edition resin figures, you might want to swing by.
Posted by Nate at 6:15 PM No comments: 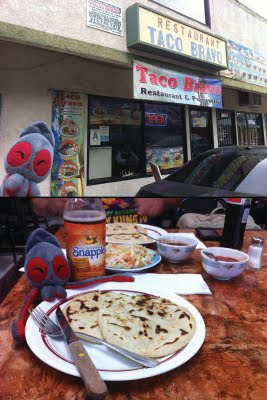 you should never invade a place on an empty stomach. sooo, we had to eat before running around E3 for a couple of hours. our Hyperactive Monkey pals stumbled across this place last year while we were exhibiting at Anime Expo last year. we go there for the Pupusas, but i call them Poopas, cuz it's more fun to say. 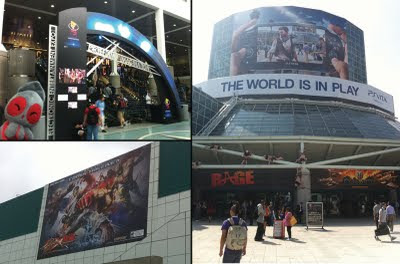 let the advertising/marketing begin. it was a non-stop barrage of lights and sounds with a side of free stuff.

at this booth you had to earn your prize. 4 out of 5 shots had to hit a single duck with a Nerf Maverick. my years of shooting co-workers in the face has finally paid off. well, paid off more than the instant gratification of their wincing faces. ha. unfortunately, the mini devil duck prize was lame.

i'm a huge Gears Geek, so i had to take a photo. gonna murder me some Locusts come September. 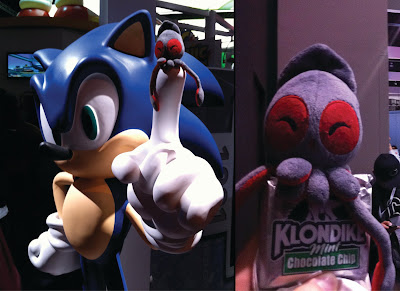 i'm not a huge Sonic fan, but he loves Squibs. a free Klondike Bar was a good reason for us stop and take a break. 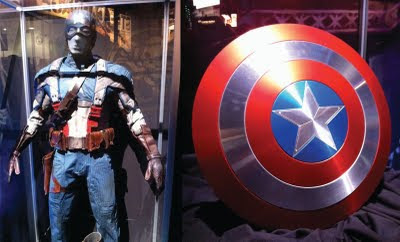 i'll have that shield someday, but the suit is unlikely. 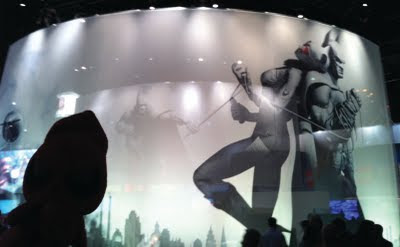 i can't wait to play Arkham City, and by that i mean, i couldn't stand waiting in line at E3 to play Arkham City. we wasted at least 40 minutes in the shortest line ever. we later found out they had been letting the fat cats in through another entrance. 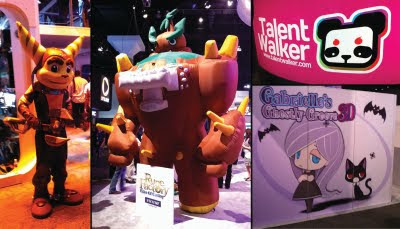 just some cute stuff i saw, except Rachet, he's not so cute. 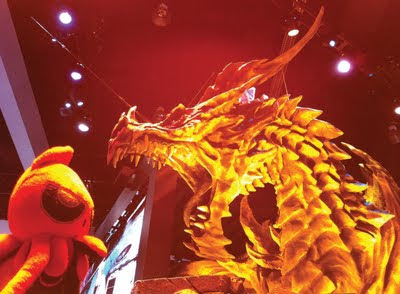 some of the cool things on display. 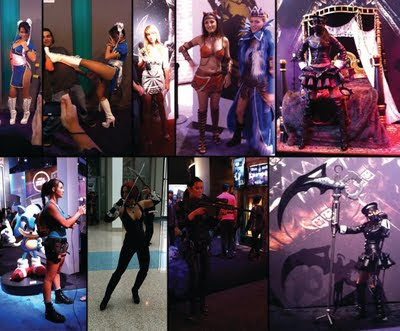 E3 always has a lot of booth babes and cos-play characters. here are just a few of the characters we saw. 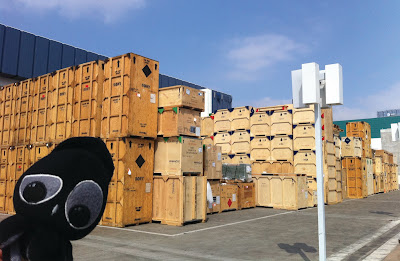 looks like Indian Jones was havin a garage sale. his self respect wasn't for sale though, he lost that while filming Crystal Skull. abomination.

another year, another E3. this show was ok. the crowd wasn't too friendly though. too long of lines, not enough game stations to play at, too many self important big wigs in suits and other grumpy/pushy people.

if you're not in "the industry" and can't get in, don't worry, you aren't missing much. the interweb and G4 have great coverage. you always see more that way anyway.
Posted by Nate at 6:11 PM 2 comments:

so it finally happened. we first met George and Ayleen way back in 2009 at Anime Expo. it was our very first time having a booth at a large convention and they happened to swing by our booth. we've since seen them at several cons, become regulars at D-con every November, and we meet up for dinner every once in a while.
they invited us on the show way back when, but scheduling conflicts and the fear of soul stealing cameras delayed our appearance. 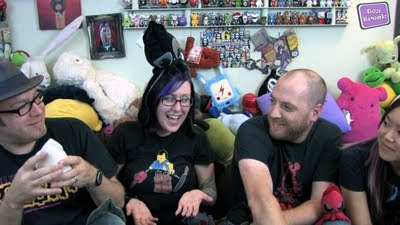 sooooo, we finally made the time to be on the show. i mustered up enough courage to get in front of a video camera for more than 10 secs and we finally got to enjoy some Blind Box Time.

i stole the photo from their facebook page and i don't think the link here will work. i'm not too interweb savvy. 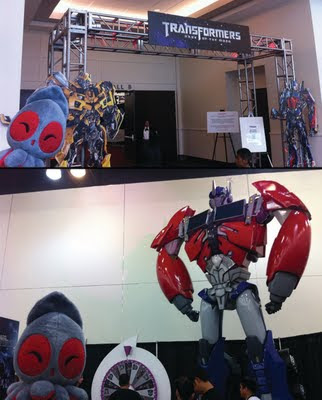 Bot Con was at the Pasadena Convention Center this year. the entrance was pretty lack luster, but they did have the giant Optimus Prime inside. so, if you didn't see it at SDCC 2010 last year you had a second chance at Bot Con 2011. 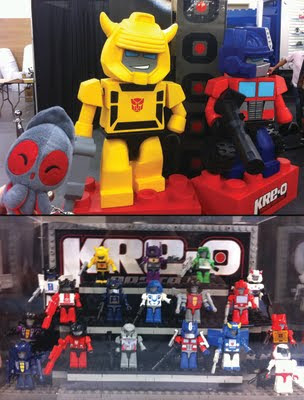 apparently KRE-O (Lego Transformers) is on sale now. i really just want the mini figures. luckily they were give out free Optimus Prime figures. best part of the Con for me. 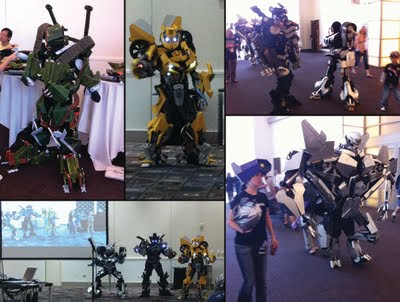 some pretty cool Bot costumes, Starscream was over the top, but not necessarily in a good way.

why is that chef so happy? cuz Chito and him are now really good friends.

Squibs don't grow on trees, especially after Chito has been in the area. 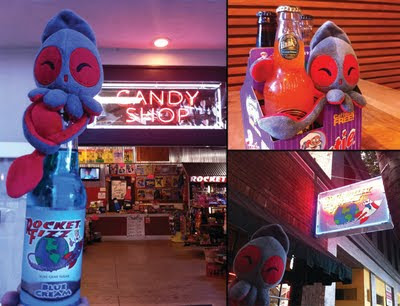 we swung by Rocket Fizz as well. it's a giant candy store with tons of soda varieties. healthy?.... no. but who cares, you don't have eat and drink it all at once.

so, that was our Bot Con 2011 experience. it was a small show with really expensive exclusives, minimal variety, and a $20 entrance fee per day. i may love transformers, but i probably won't go back every year. i do love the snacks in Pasadena though.
Posted by Nate at 12:17 AM No comments:

Kaedin Nathaniel Mitchell was born at 4:13 am on 4-8-2011. we took a quick trip out to Colorado to visit my first nephew in early May. 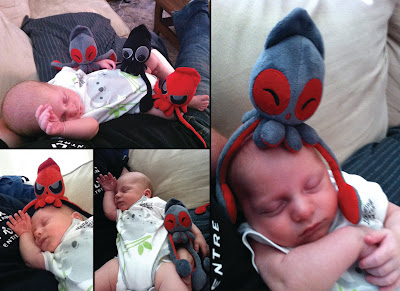 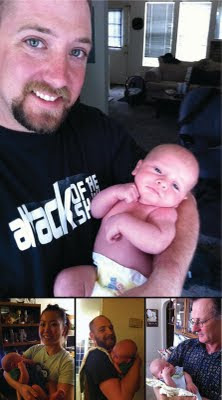 here's the happy dad (my brother). of course everyone took turns holdin Kaedin. even Gramps (my dad) showed up. sorry, no photos of mom on my Iphone.