so, i'm not a packaging designer, but i did it anyway. here are some images showing the development for the 10-Doh! packaging. 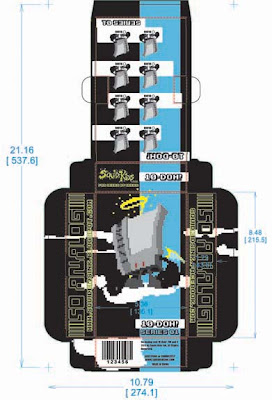 this was the first pass. i thought i'd use the pixel art from the So Analog label, but that presented several problems. this would have been a blind box with the figure version being marked on the back. not ideal or effected. it also makes the packaging too specific to the So Analog labeled figure and not a general 10-Doh! package. 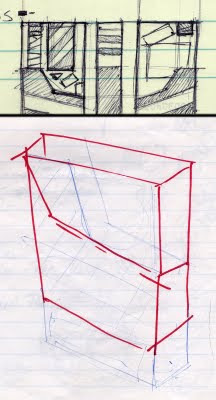 i decided to make it a window box. which is more expensive, but allowed me to show the label graphics of each figure. i had planned to still use the pixel art for the graphics. it wasn't until the last minute that i came up with the idea to make the box look like a cartridge in a slipcase. seems like a no-brainer, but i got lucky. these are some of the sketches that solidified the idea.

this is the final graphic layout for the packaging. like everything, there are things i would change, but there just wasn't enough time. maybe down the road a bit. 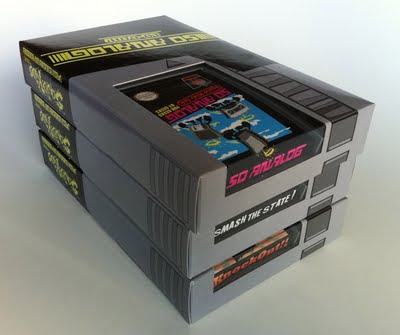 one of the best things about the packaging is that they look like a stack of old games. of course the figures look way better out of the package, so please open them and enjoy. 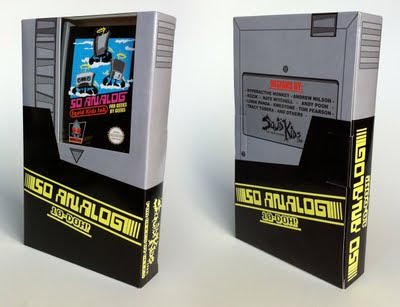 here are the final front and back views. i really tried to keep the packaging simple and compact. the hands and feet are stored in the bottom and support the body, so it shows through the window.

i'm still pretty amazed that this whole concept worked out as well as it did. i didn't really show off the packaging at all before SDCC, but everyone that has seen it, seems to like it.
Posted by Nate at 8:19 PM 6 comments: 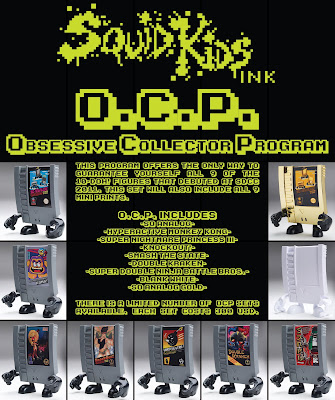 there is nothing i hate more than not being able to complete a collection. i'm sure there are things i hate more, but when it comes to collecting toys, an incomplete collection is just painful for me.

i wanted to make sure that the people like me, would be able to get a complete set of these figures if they really wanted to.

so, i smashed my self diagnosed toy collecting O.C.D. (Obsessive Compulsive Disorder) with my love of Robocop, to come up with Squid Kids Ink's O.C.P. (Obsessive Collector Program)

this is the only way you are guaranteed to get all 9 figures that debuted at SDCC 2011. this even includes the Convention Exclusive So Analog GOLD figure and all 8 mini prints.

i also wanted to give a price break for the O.C.P. members. so, at a convention you can get them all for $300 even, or order them online for $315. the extra $15 is to cover shipping, because i can't set up separate shipping prices on the web store.

so, here's a quick wrap up of our experience of exhibiting at SDCC for the first time. 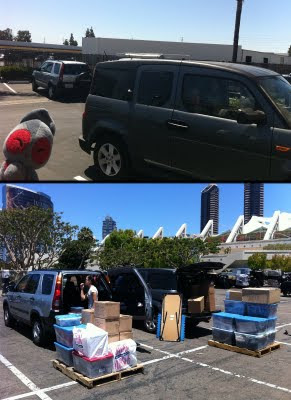 we decided to take 2 cars fully loaded. the top image is us parked at Mana Studios in Orange County picking up some last minute casting. the bottom image is us unloading everything on to pallets behind the SD convention center. 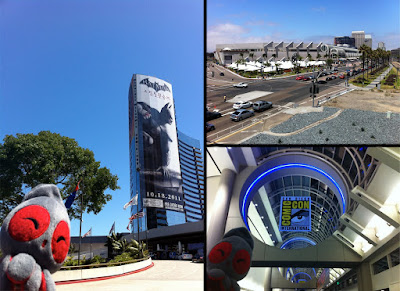 SD is a great city for Comic Con. the weather was very nice this year. not very hot at all, but then again, i was stuck inside behind the booth all day everyday. 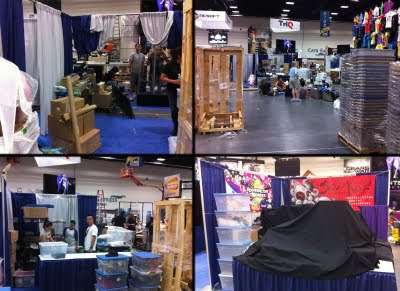 setup went pretty well. my little brother Dylan wasn't allowed inside while all of the fork lifts were running around. so, he got to watch X-men First Class. not a bad deal for him. 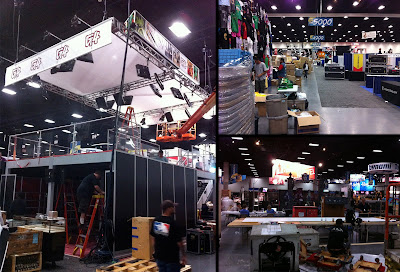 the setup of the rest of the convention was pretty amazing to see. tons of time and effort goes into the ridiculous spectacle the SDCC has become.

here's a quick little photo of almost finished booth and a nice shot of George lookin like a deer caught in some headlights. good times. 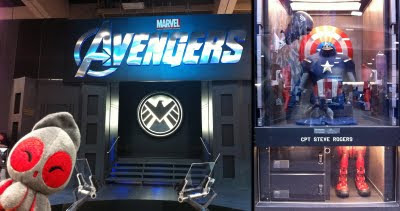 even though each day was completely draining, we managed to catch a late showing of Captain America. it was one of the best movies of the summer for me. 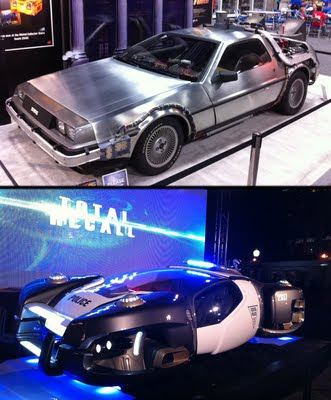 i'm thankful that i didn't get the Mattel Back to the Future exclusive. it was pretty lack luster and over priced. and look, another remake that doesn't need to happen. woo...hoo? so, it was a slow start for us at the show. our 10-Doh! figures were stuck in customs for at least 11 days. i had to drive back up to LA on Thursday. luckily Chito decided to take the journey with me. it was a huge relief to see them at the DKE warehouse. we loaded up some as quick as possible and got back to SD around 9pm. we only had to miss half of the show that day, not too bad. 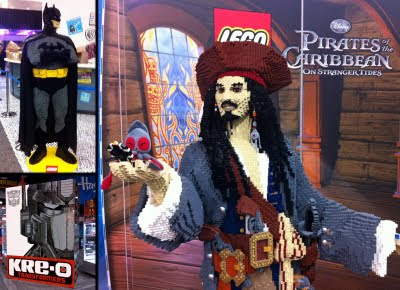 Pirates 4 was one of the worst movies of the summer for me, but i couldn't resist takin a photo of him holding a Squib. 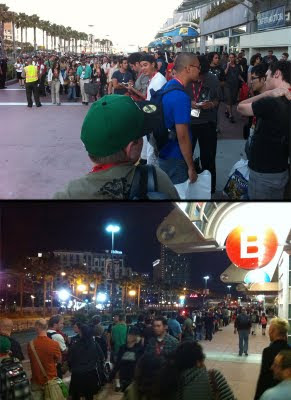 SDCC seems to be 90% lines. we tried to save money by takin the shuttle to and from the hotel. after a really long day, the shuttle line seemed to take forever. 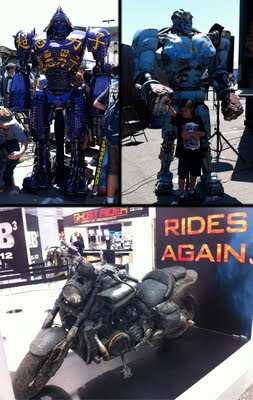 i have really low expectations for Rock'em Sock'em Steel and Ghost Rider2, but i'll probably still see both. 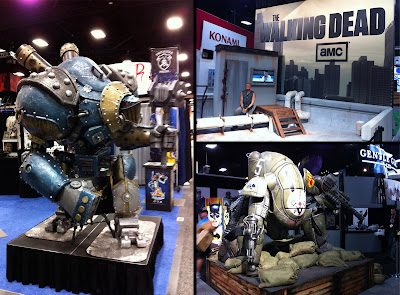 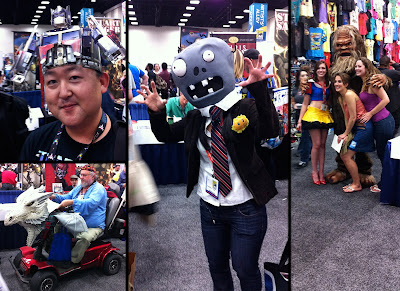 i barely saw any costumes this convention. it really is more of a mainstream crowd than the smaller shows we do. Hasbro was givin out Prime truck hats and the guy above actually transformed it into his robot form, pretty awesome. and the Dragon Rascal was pretty sweet. 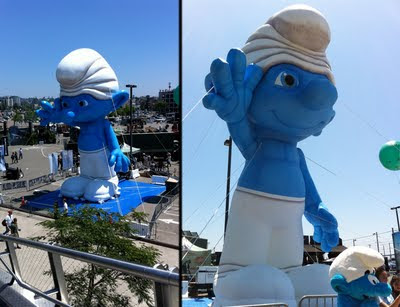 i used to love the Smurfs, but there is no way i'm paying to see the new movie.

here's a pretty awesome sword competition happening. and Adventure Time was all over the place, maybe a bit too much, maybe not. 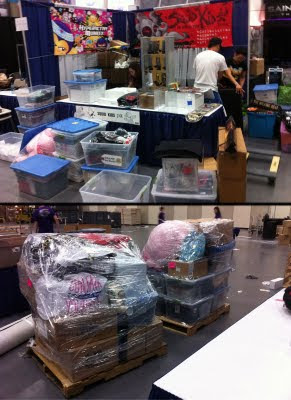 move is always a big question mark at a new show. this one was a mess. gettin everything loaded up wasn't that bad, but we ended up waiting at least 3 hrs for them to deliver the pallets to our cars. ended up being a very very long day and late night. we'll do it different next year.


so, our very 1st SDCC booth went pretty well. we had ridiculously high hopes goin in. it's hard not to get caught up in all the hype and BS that SDCC has become. after a day or 2 we reassessed our expectations and met our more realistic revised goals. it was our best show so far and we'll definitely do it again.

it wouldn't hurt my feelings at all, if the show shrank a bit. get rid of a ton of the huge movie, TV, and video game dog and pony shows. it's difficult to compete with multi-billion corporations gushing out free stuff to everyone. but i guess plenty of people get excited for all that jazz. and i have to admit i'm one of those people. Dylan was able to get me a Sword of Omens and a deck of Young Justice playing cards. i also spent a ton of money on Hasbro and Mattel figures. i have a really bad habit/addiction/obsession.

it was great to get to meet a lot of new people and see their reactions to our products. it's by far the most rewarding part of doing any convention. each show just keeps getting better.