WonderCon 2012 came and went by so quick this year. i barely took any photos, but here are a couple of them.

so, WC was in Anaheim this year. we were very skeptical about the show being there. we did Wizard World there a couple years ago and it was rough. i had to set up by myself this year, but it went well enough. 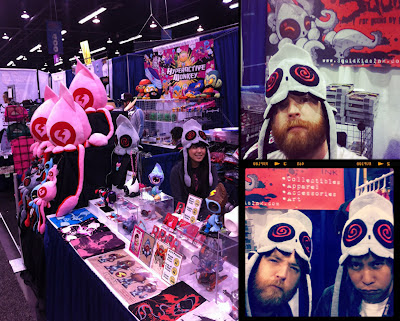 Linda was able to take off work on Friday, so finishing setting up was easy. Chito also hung out almost all weekend. the convention center was freezing, so i was happy to have my new Squib hat to keep me warm. 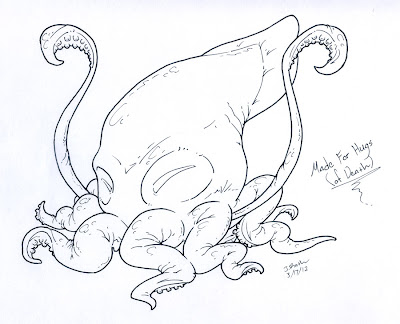 we met a guy and his son that stopped by the booth a couple of times. the last time they came around the kid gave me a drawing he did the night before. i say kid, cuz he's only 16 years old. based on the drawing i think he'll do just fine as an artist/designer. i've already framed it. 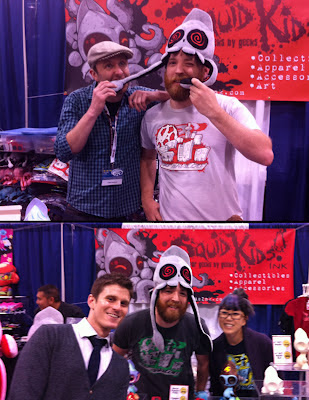 another highlight was meeting all of the guys i watch on G4. up top is Chris Hardwick, we got to discuss some Walking and Talking Dead. Linda had to chase down Kevin Pereira for me. i also met Chris Gore, but i was alone, so no photos, dang. hopefully one of those meetings will lead to my 10-Doh! figures being feature during Attack This! on AOTS, hopefully. 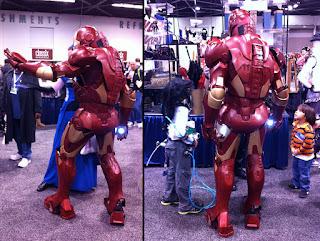 i usually take more photos of the costumes, but i just wasn't on top of it this year.

grumpy or sleepy? both are accurate on any given day. 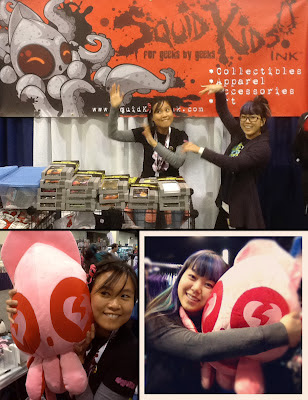 Linda and Viv dancin and lovin our Colossal Squib. who's givin Hugs (of death) now? 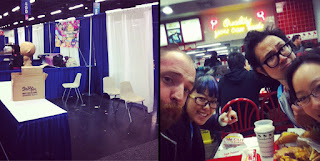 we packed up pretty quick and then helped out Jerome and Daisy. then we headed out to get some In N Out to celebrate and relax a bit before we headed home.

the show definitely wasn't the same as WonderCon up in SF. but after all was said and done, it was still a pretty good show for us. we still had a bunch of repeat customers, which is awesome. i love seeing familiar faces. there were also a bunch of new faces too. overall all it was a fun show, but i'd rather it be up in SF. parking was a ripoff with no chance of street parking. and Moscone Center is dedicated to WonderCon while it's goin on. most of Anaheim Convention Center was filled with volleyball players and cheerleaders. time to start preparing for AX  and SDCC, WoooHooo!!
Posted by Nate at 6:44 PM No comments:

lots of big news for WonderCon this year. hope to see you there. 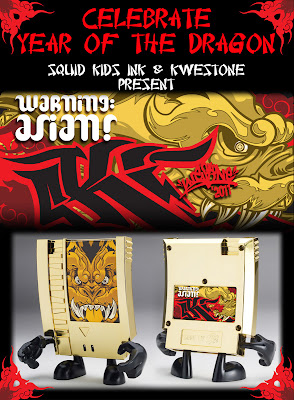 first up is a new gold 10-Doh! figure. this guy is a perfect fit for this year, seeing how it's the Year of the Dragon. if i would have been planning things perfectly, i would have released this during CNY. instead i decided to save it for WonderCon. Stop by and pick one up. You might also see Kwestone lingering around. he does that sometimes. 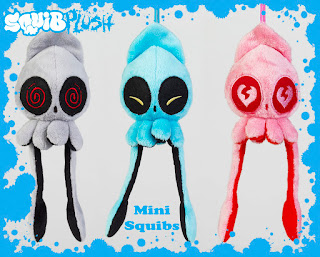 the invasion continues. new Squibs have arrived and they're lookin to take over your life. these are the 3 new variations of the Mini Squibs. 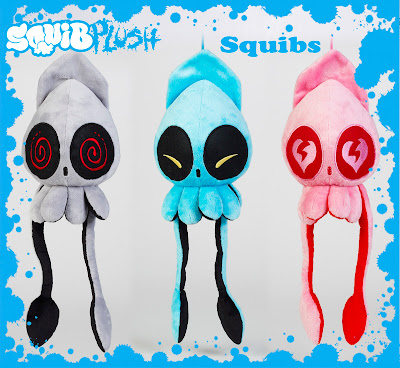 Same 3 styles, but "LARGER", but still the same size as the last batch. 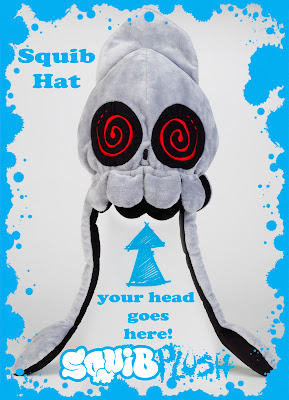 protect your brain and "Beware the Stare". these Squibs are primed and ready to become a part of you. one size fits most. 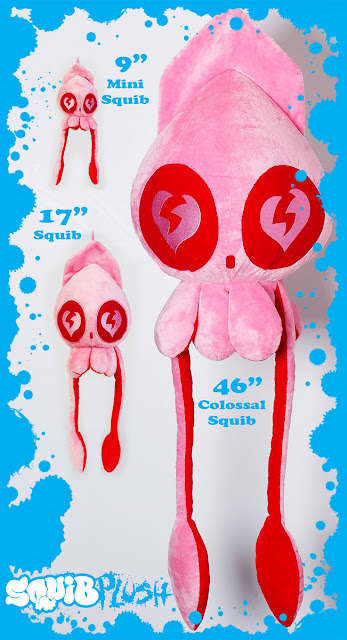 it's hard to imagine, but this big beauty is almost 4 feet tall. great for crushing your enemies, or as a massive pillow.

WonderCon is in Anaheim this year and that has a lot of people nervous. it's usually in San Francisco which has always been very kinda to us. hopefully it's nothing like Wizard World from a couple of years ago. that was a depressing show. so, stop by and make the show what it should be.

we only have very small quantities of the plush for the show. our main shipment is still on the ocean. so, come early and buy, buy, buy. we'll probably run out of some of the items. but don't worry, i'll make them available on the website for pre-order.

we'll might have some show exclusive deals goin on as well, but you'll have to stop buy to find out what they are.

i was contacted a couple of months back to sponsor the Vinyl Thoughts 2 show. i'm not really in a situation where i can afford to sponsor anything except my own stuff right now. but, i did want to contribute to the show, so this is what i came up with. 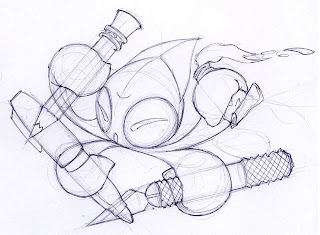 here's the rough sketch of a Squib ready to do some customizing. he's armed with a pencil, Sharpie, some paint, and an X-acto. 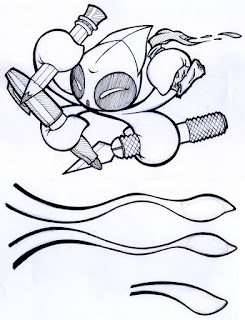 i used a Sharpie to do a tighter line drawing 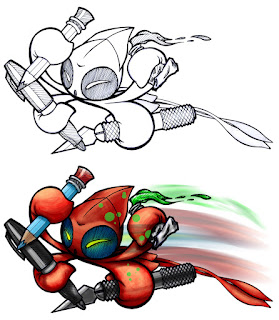 i combined the line work and rendered it in Photoshop. 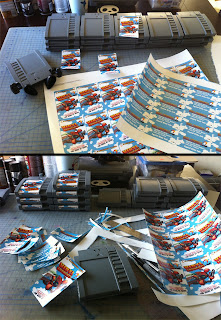 the labels were printed on high quality sticker paper. i only made 15 of these for the show. it still took a long time to cut everything out and make sure the labels were laid down well. 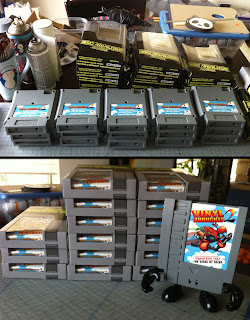 here they are all packed up and ready to ship out to Texas. 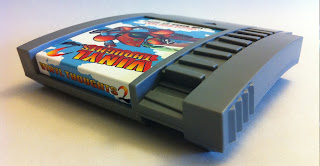 here's the top view that is rarely seen. 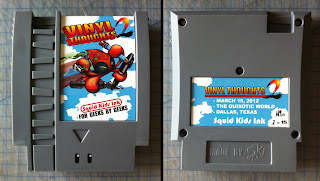 the label is an obvious play off of Super Mario Bros. 2. 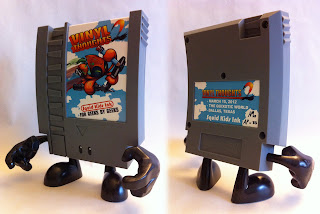 a nicer front and back view. each one was signed and numbered. this one has an "AP" for Artist Proof. so, there are really 16, but only 15 available for sale. 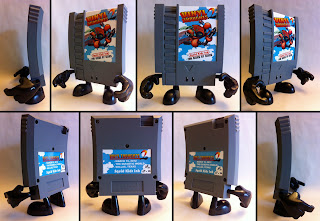 this is the 1st time i've done a super low run of 10-Doh! figures for an art show. i wish i could make it down to Texas for the show, but money is tight these days. hopefully the show goes well and they sell out. if not, they're also available at http://www.vinylthoughtsartshow.com/shop/ for 30 days after the show. i'll put any remaining figures up on my store after that.
Posted by Nate at 3:50 PM No comments: