SEY-GAH!! WHAT COULD HAVE BEEN.

So, here's a little behind the scenes of what could have been and why it's not gonna happen. 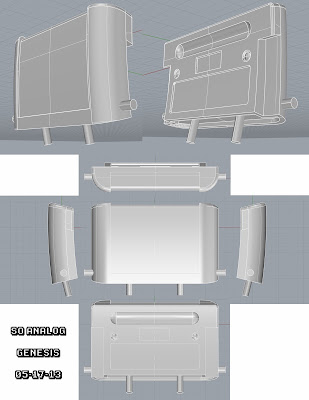 I don't always sketch out So Analog figures before sculpting them in Rhino. I use a real cartridge as reference a go from there. This was the 1st pass and pretty close to the final. The arm location was the only real change I made. I wanted the 10-Doh! arms to be interchangeable, so I also needed to adjust some of the geometry. 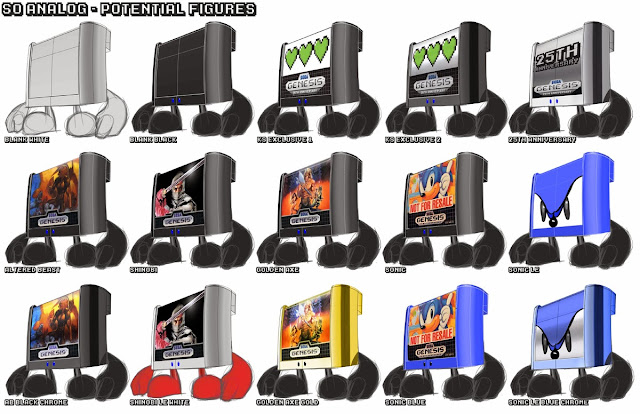 At SDCC 2013 a lady from Sega America approached me and we discussed doing a So Analog figure for Genesis's 25th Anniversary at SDCC 2014. Of course that was very exciting for me. We discussed doing a Kickstarter to get the funding and these are some of the concepts I mocked up shortly after.

It seems that all submissions had to go through both US and Japan approvals. This image shows a couple of the compromises that had to happen for this project. 1st, I mocked up Sonic using contemporary eyes, they wanted to use "Classic" Sonic eyes. Totally understandable. 2nd, I knew I'd have to raise a huge amount of money for new steel molds, so I wanted to just reuse the arms and legs from 10-Doh!. Then have new arms and legs as a Stretch Goal. 3rd, Japan totally rejected these designs, so I would have only been able to make Sonic figures with "Official" label art. Either they hated it, or it conflicted with their other licensing agreements. Sonic is their baby, so I'm sure they have lots of restrictions on usage, but still disappointing. 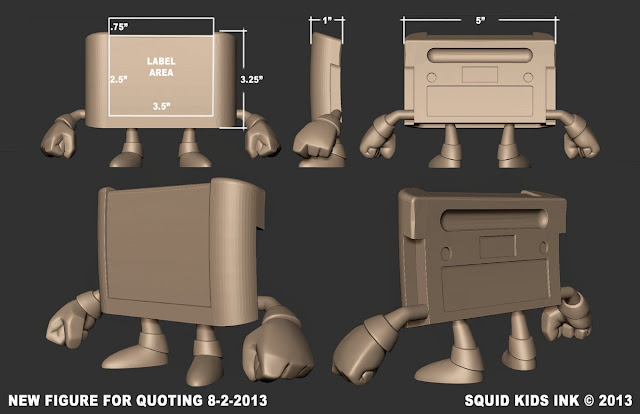 I still kept plugging forward. I needed models for the Kickstarter video, so I spent money having the arms and legs modified by Mana Studios, but never printed them.

We did print, mold, and cast up the body, but I just used 10-Doh! arms and legs. I wanted to do 2 Blank versions for customizers.  The licensing agreement included 4 games to start, plus additional games could be added later.

Altered Beast was a quarter thief in the arcade, but it was a no brainer to do as a figure. The figure on the bottom would have been a Black Chrome Kickstarter exclusive.

Golden Axe was another no brainer. It's still one of my favorite classic arcade games. I know there weren't any "gold" Genesis cartridges, but I still thought it would work with Golden Axe as a Kickstarter Exclusive.

I never owned a Genesis, so my only Shinobi experience was from the arcade game which I still love.  I would have to do Revenge of Shinobi, because the original was on Sega Master System. I wanted to do a Chrome version as a Kickstarter Exclusive.

The obvious choice was always Sonic. The Blue Chrome version might have been an SDCC 2014 Exclusive. I was also going to be allowed to do Sonic 2 and 3 in the future.

I wanted both of these to be Kickstarter Exclusives. They have the "NOT FOR SALE" on the label, just like the games you got with the Genesis system. It would have been a good way to differentiate Kickstarter figures from regular Sonic figures.

Then, the week of D-Con I heard back that the original deal of doing a Kickstarter, then paying the royalty wasn't possible. That means they wanted their money up front and I'd lose it, if the project didn't get funded. 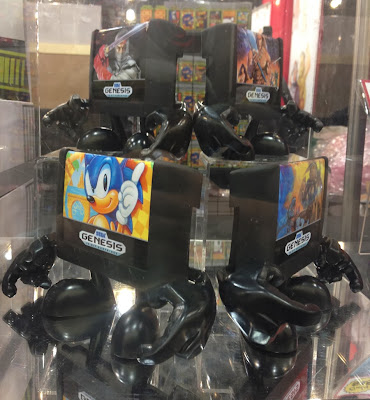 I told them, that I'd still show them at D-con to see how much people reacted. And people loved them, but that didn't change the fact that I don't have the cash up front.

Soooo, it pretty much died there. I couldn't bring myself to risk that up front money, or borrow the money. I'd rather put that towards other projects that I have full control over. I didn't quit my great paying job to do more licensed product. I didn't do 10-Doh! to hopefully get the Nintendo license. I make these figures because I love my memories of them. The parody is what I like about them. If I wanted the "official" art, I'd buy the actual game.

It's also a great way for me to work with a ton of artists and help get their art and brands out there more. I really didn't want to have to submit their art for "Licensor Approval".

I really didn't like that they changed the deal or might have wanted approvals over all artwork. But I don't have any hard feelings. They have their company policies and the way they want to do business. This project just wasn't meant to be.

I'm still only 1 guy making toys and I'd much rather focus on what I really want to do. It would have taken over my life and delayed other projects. Of course, I may be kicking myself later for missing an opportunity, but for now it feels like the right choice.
Posted by Nate at 12:20 PM 4 comments: