Ante Ups has been in development limbo for over 5 years. The original models were in scale with my 7" 10-Doh! figures. Here are the original sketches from Jan 08 and photos of the resin figures that were never released. 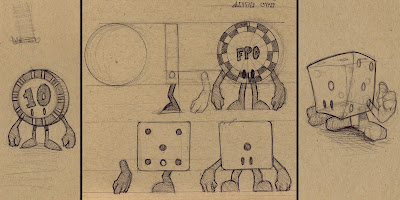 Craps (The Chip) was originally a completely blank disc. Once I decided to rework and release Ante Ups, I knew Craps needed the most work. Short Stack (The Die) original sketch had some wacky curves, but the original sculpt is essentially unchanged.

I redid Stud (The Card) to have the same arch as all of my So Analog characters. The original model has a pretty extreme bow to him. I knew I needed to modify him so his body would work with the existing So Analog arms and legs. 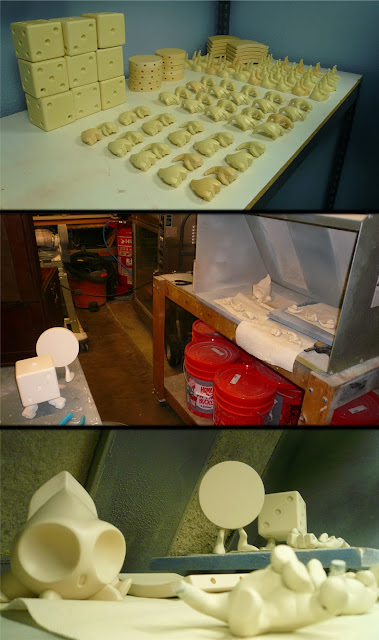 Like always, Mana Studios did the molding and casting. 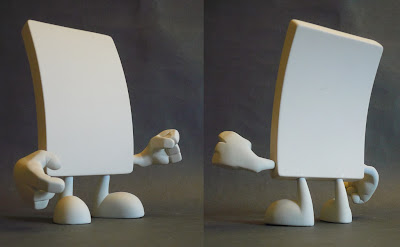 Stud was meant to use the same arms and legs as 10-Doh!. I plan on making the arms and legs interchangeable between all So Analog and Ante Ups figures. 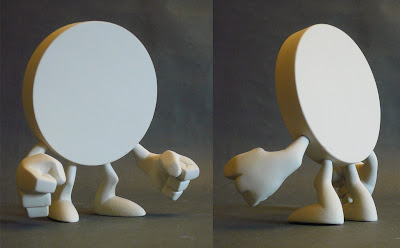 Craps was supposed to use the arms and legs or A-Drive, but I haven't been able to afford to produce A-Drive yet. So, I need to make sure that 10-Doh!'s arms and legs will work with Craps' body. 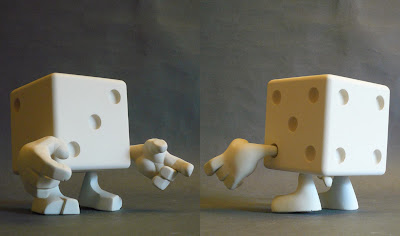 Short Stack also got the short end of the stick. I wanted him and B-Side to have the same arms and legs, but you've heard that story already. Ha. 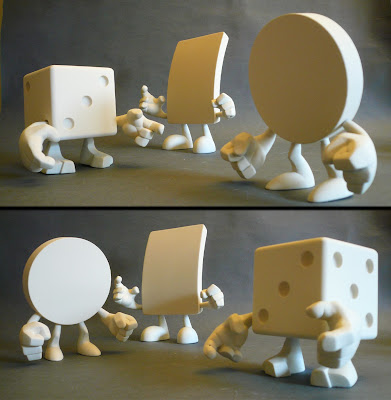 Thankfully, I've found my original set and the some extra castings. I've decided to sell some of the castings at Dcon this year, but I don't know for how much or how many will be available. Right now I can't find the arms and legs, so I might have to use 10-Doh! arms and legs for them. All future releases will be made from new models and molds.
Posted by Nate at 10:13 AM 2 comments:

Last year I was lucky enough to be giving the opportunity to do the back cover for the Dcon 2012 program. I must have done an ok job, because they offered me the front cover shortly after the show. Of course I waited till the last minute to do this one. Oooops. Here's some of the stages of development. 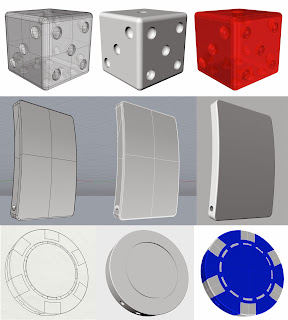 I used my Rhino models as underlays and actual elements for the final illustration. 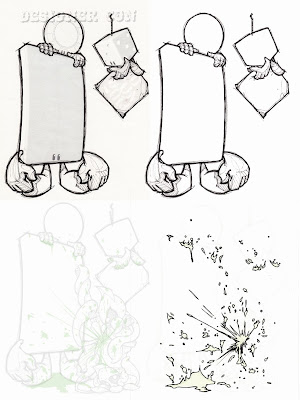 I probably do some unnecessary steps every time I do an illustration, but that's how my brain wants to work. I print out low opacity images and trace/redraw stuff. It's similar to using a lightbox for doing overlays. 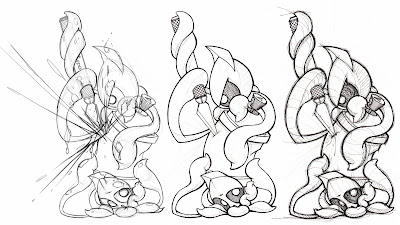 The sketch on the left was done on a Cintiq, then printed and cleaned up on copy paper with a pen. The sketch on the right is a rework of the middle clean version. I didn't want this illustration to be super clean like last years back cover, so I went back in and put some life back into it.

These are the 3 teaser images that I posted on Instagram.

This cover was a challenge for me. I was pretty happy with what I did last year, but I didn't want to do a complete retread of last years concept. The 2 images on the left we too boring and just showing off the new characters. To me, Dcon is about artists creating stuff, and I still wanted that represented in the illustration. 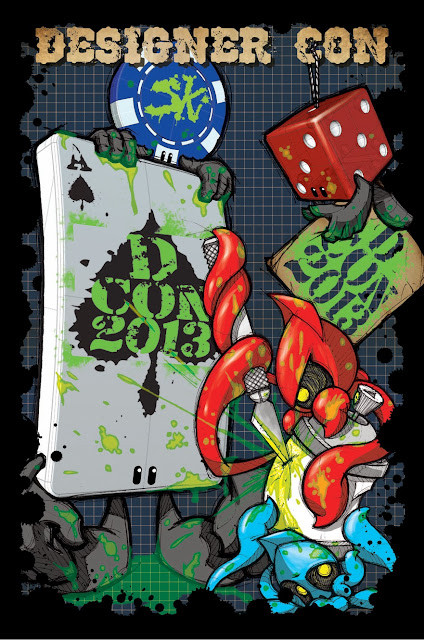 Here's the final, but it still has the bleed on it. So, the actual printed program won't have such a thick ink border. It's also missing my signature. Is it better than last years?? Maybe, maybe not, but I still like it.

Everyone that attends Dcon 2013 should get one, so you can't complain about that price. I'm also doing 10 Preview Editions of the each Ante Ups figure, but those might be pricey. Stop by booth #332 at the Pasadena Convention Center Nov 9th and 10th and say "hi". I'll be on my best behavior, so I should say "howdy" back.

Way back at WonderCon in March, I was in the middle of the Mini 10-Doh! Series2 Kickstarter and was still trying to plan out the rest of the year. I knew I needed to do some more Limited Edition Mini 10-Doh! figures down the road. SpankyStokes stopped by the booth like he always does, and this is the result of our conversation. 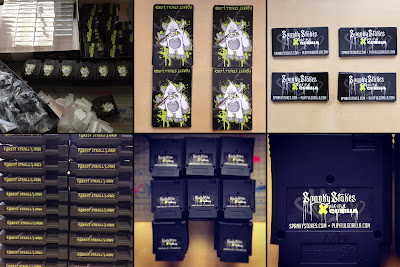 Spanky teamed up with Playful Gorilla and they came up with the Forest Stroll Lord Mini 10-Doh!. 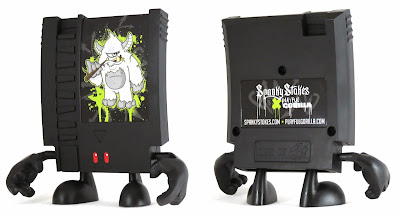 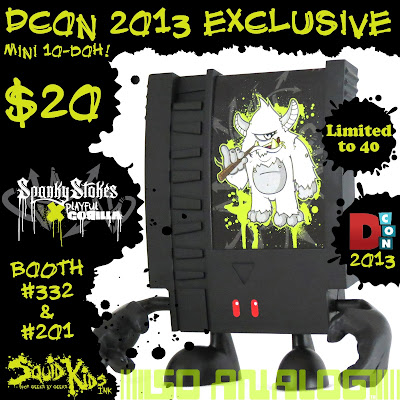 We split the 40 figures, so we'll each have them at our booths. I doubt there will be any left after the show, but if there are, we'll be selling them online as well.

Don't miss out on this or all the other great stuff at Designer Con Nov 9th and 10th at the Pasadena Convention Center.

Check out more of their stuff at www.spankystokes.com and www.playfulgorilla.storenvy.com

This terrible character might not be the only reason that I'm no longer a huge Star Wars fan, but he is a major contributor. I wasn't really planning on being a part of this show, but once I thought about it, I couldn't resist showing my disdain for the existence of this character. 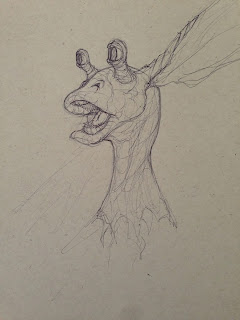 This was the original sketch I did in my sketch book. Pen and ink like usual. I had a loose idea of what I wanted to do, but it wouldn't fit on the page. 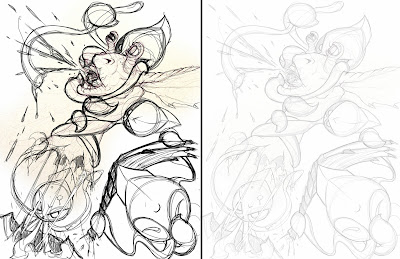 I roughed out the 8.5" x 11" layout in photoshop and printed out a really low opacity template to ink.

These are the 3 teaser images i put up on Instagram a while back. 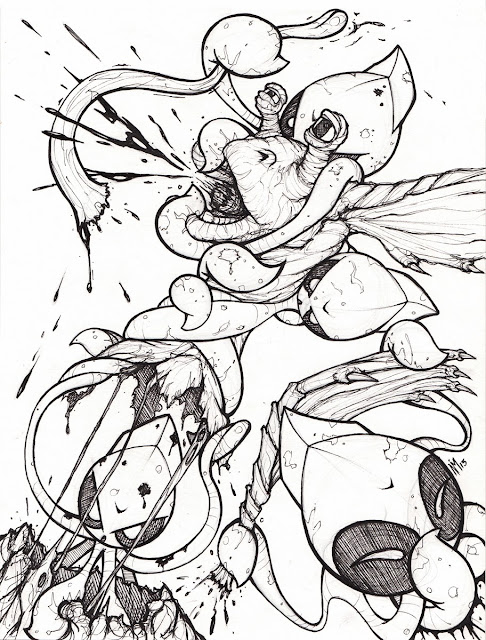 Here is a scan of the final illustration. Of course I modified some things while inking. It's a bit chaotic, but I'm pretty happy with the it overall.

You can see and buy this heartfelt homage to Jar Jar at Dcon in Pasadena on Nov 9th and 10th. Here's more info about the show. Tons of great artists involved.

DKE Toys presents “The 99 Deaths of Jar Jar”, a group art show featuring 99 artists. Each artist was asked to submit a black and white, pen and ink illustration on an 8.5 x 11 sheet of paper and chose one way to maim, torture, and/or kill our least favorite Gungan.

Jar Jar Binks was contacted for comment about the event and noted about the show, “Why meesa so hated?”

This art show is not sponsored or endorsed by Lucasfilm, and has no relationship with them in any way.
Jar Jar Binks and all related intellectual property is copyright and/or registered to Lucasfilm Ltd. & TM. All rights reserved. But who would really want to own the rights to Jar Jar anyway.  Go step in poo doo.

Rumor has it that there may or may not be a corresponding collectable program (er.. crappy zine.. er..something) but that remains to be seen. Show up for more details…