our new friend Mitchell Bernal stopped by our booth and offered me the chance to customize a Skelanimal for SDCC. it was a nice little surprise at AX2010. 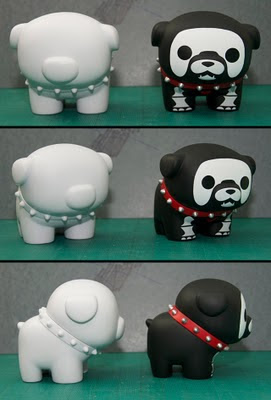 so, i started with a cute blank white puppy. 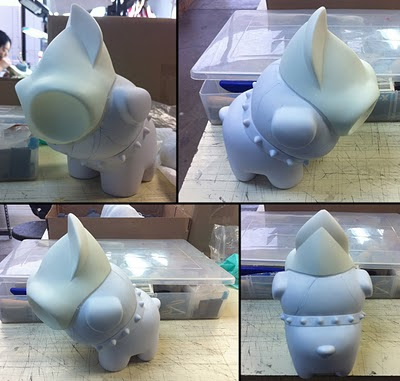 i've only done one other custom in my life. i'll post images of my MOD:one rabbit someday. i took one of my 5" Squibs and cut off all of the legs, then sanded him to fit the head and hot glued the 2 together. 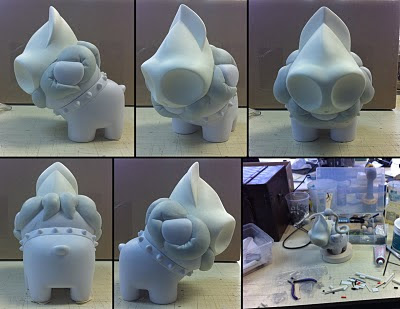 next step was to add some tentacles. i used Magic Sculpt which definitely has it's pros and cons. it was probably only my 2nd or 3rd time using the stuff and it went pretty well. the 2 long tentacles were the most difficult part, and in the end i had to sand those quite a bit. 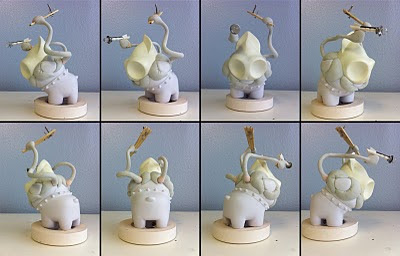 here is the final sculpt. i used part of a paint stick for the wood piece and real nails. the laser blaster was built out of Styrene, washers, and an acrylic sphere. 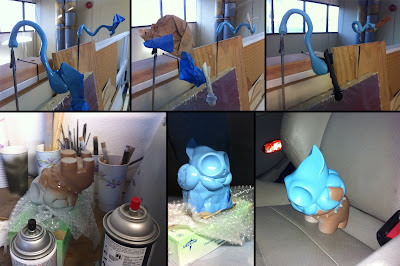 painting isn't my strong point, and i generally don't like doin it. the primer and base coats were the most work, or at least took the longest to do. seems like it was mostly waiting for things to dry. it also didn't help that the figure was so front heavy. he always wanted to fall forward and did once or twice. 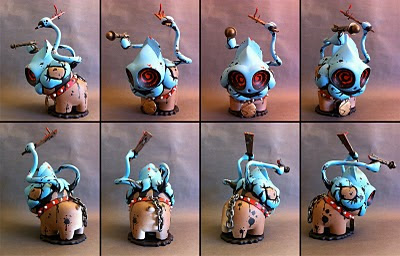 so, here's the final custom. i added a chain, a "S" logo dog tag, and a base for stability. the rest of the paint was pretty fun to do. i didn't want to worry about clean lines and precise painting, because it's just not my cup of tea. i was able to avoid that by putting "black ink" at all the connection points.

i only had 11 days to customize this figure. it arrived on July 6th and had to be delivered by July 16th. i probably spent 30-40 hrs working on it during those nights and one weekend. this bad boy is gonna be on display at SDCC 2010 at the Toynami booth. if you don't get a chance to see it there, it will be traveling to all our future shows too.
Posted by Nate at 8:05 PM 2 comments: 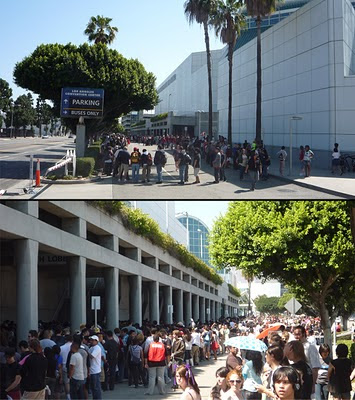 so, there was a crazy long line for pre-registration on setup day. we were just walking around to get something to eat. i'm so thankful we don't have to wait in those lines. 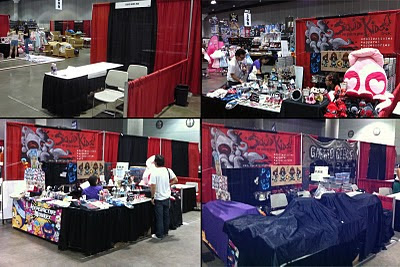 set up took longer than usual. we had to park in the structure, rather than unload in the back like last year. very annoying and very tiring. we didn't bring a dolly cuz they said we wouldn't be able to use it, but no one cared and plenty of people were using them. lame. 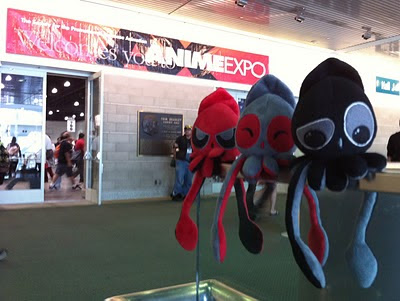 these fellas weren't really the welcoming committee, but maybe someday they'll be that popular. 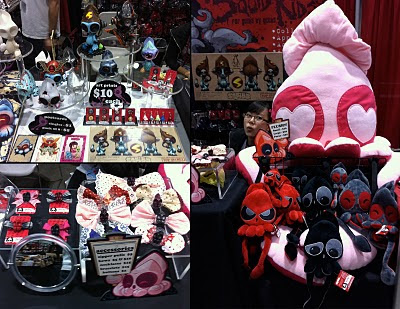 AX 2009 was our first convention where we had a booth. it went well enough that we decided to come back in 2010. we've accomplished a lot over the past year. a lot of people remembered us and we met a bunch of new people as well. over all a good show. 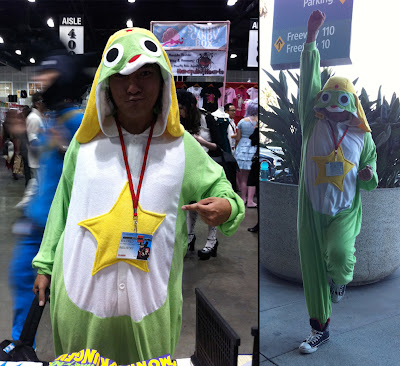 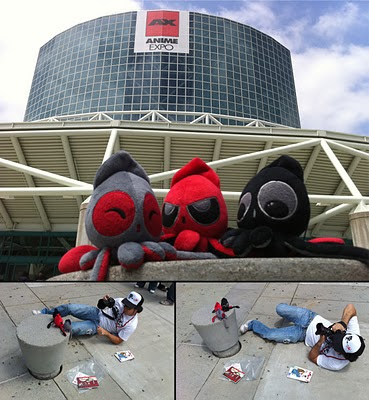 here's Jerome pretending to be a photographer. he hasn't given me the photos he took. the photo on top was taken by me with my iPhone. 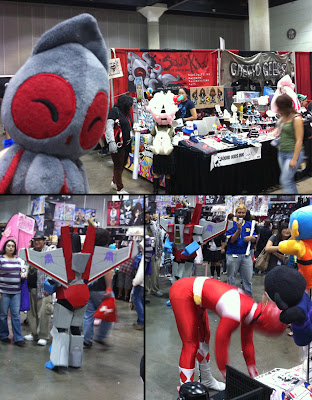 one of the best things about AX is the crowd and all of their costumes. i took some photos, but it was tough being behind the booth most of the time. 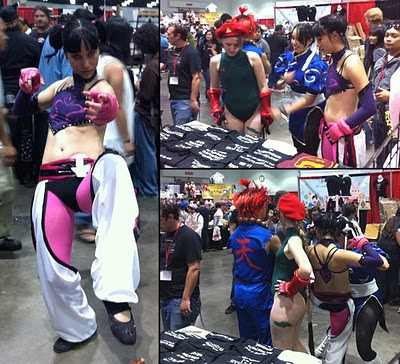 we're big fans of SSFIV and this group was pretty entertaining. no Gouken though, maybe next year. 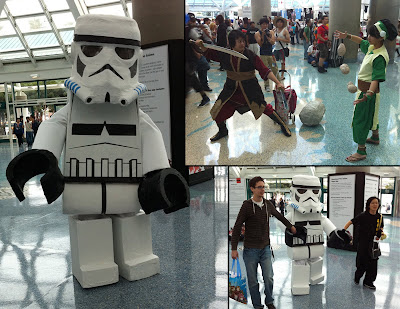 this Zuko/Toph battle was way better than the movie, and the Lego Storm Trooper was pretty awesome too.

now time for lots of costumes. 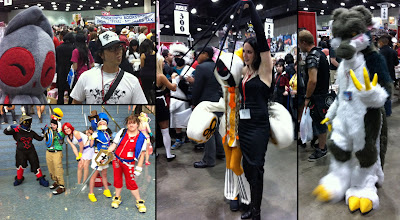 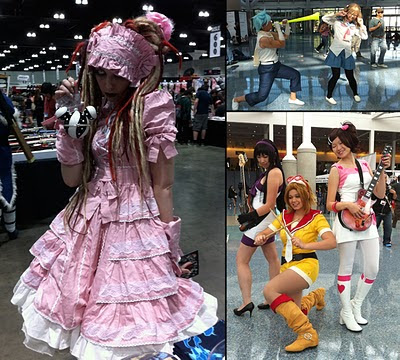 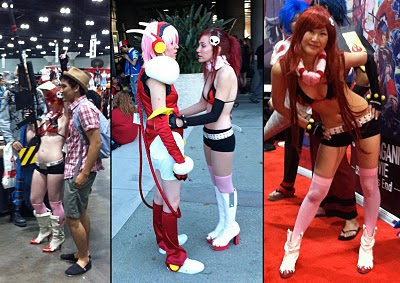 quite a few Yokos this year, but i only got photos of 3. 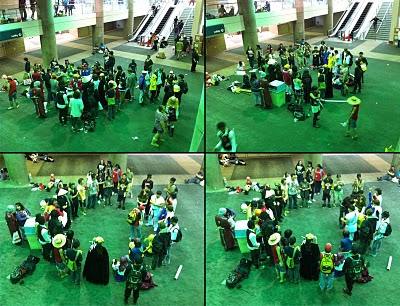 this was a big group acting out what looked like a Pokemon Vs. Yu-Gi-Oh battle. first time i had ever seen that. 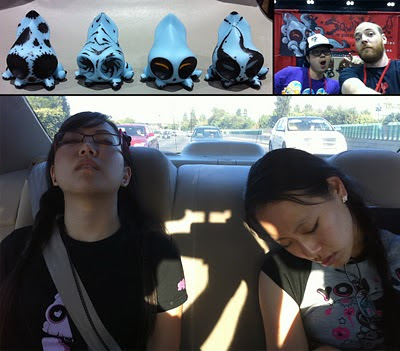 on Saturday i customized 4 little Squib stamps. i didn't sell any, but i'm ok with that. i'd rather keep them for myself anyway. i always seem to be able to get a nice photo of someones nap time. i'm sure someday i'll be the victim of one of these photos. 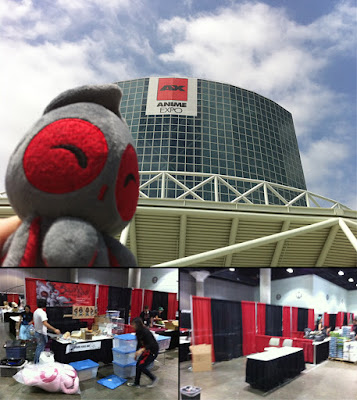 The End. we cleaned up super quick and had a dolly to help. we also did our traditional Pinkberry visit afterwards.

so, AX2010 went really well for us. well enough for us to come back in 2011. we might not be the perfect match for the crowd, but the crowd is usually very supportive of our work. technically, it was our best show yet, but we would have done better at WonderCon if it ran for 4 days and we didn't sell out of product. next year should be even better. special thanks to all of those people that stopped by and bought something.
Posted by Nate at 9:29 PM No comments: 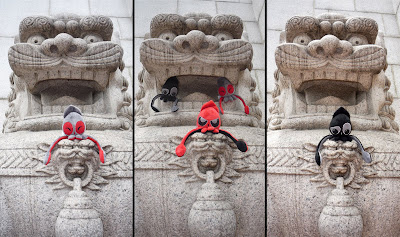 these little buddies were hangin out in front of the HSBC building on HK island. 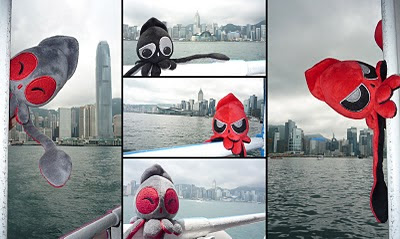 some stowaways hopped aboard the Star Ferry in HK harbor. it's always been a nice relaxing way to get back and forth to HK island. 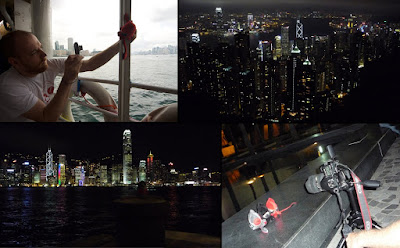 here's a little behind the scenes for you. doesn't usually happen, cuz i'm usually the only one takin photos. the lower night scene was taken from the Avenue of the Stars. the top night view was taken from The Peak on HK island.

i don't have a lot of Squib photos in HK. which is surprising considering how many times i've been there. then again, i've only been there once since we got our shipment in. my buddy Fraser did take some other really good photos, so i'll post those when i get them.
Posted by Nate at 8:30 PM No comments: