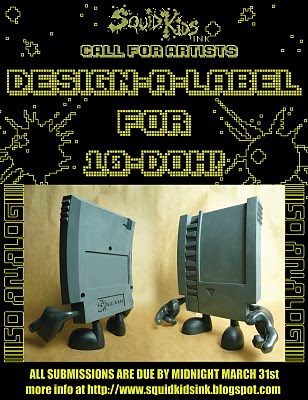 This is an open call to all artists. Squid Kids Ink is looking for some creative and clever labels for their new line of 10-Doh! figures. The selected submissions will become part of the 2011-2012 line of So Analog figures. All selected designs will be on display in the Squid Kids Ink booth at San Diego Comic Con 2011. The rules are down below, and the deadline is March 31st so get crackin. 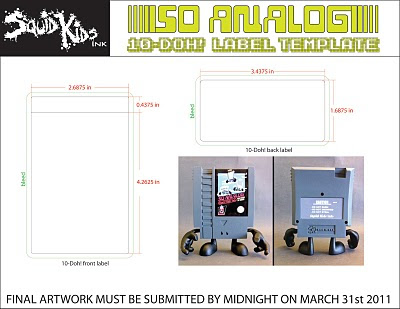 download templates here
http://squidkidsink.com/soanalog10doh_template.zip
Rules-
-Open to the whole wide world.
-Multiple entries are welcome.
-Subject matter should be somewhat family friendly.
-All submissions must be original artwork. No copyrighted characters or artwork will be accepted.
-Both front and back labels must be submitted at the same time and both are required to be chosen.
-Files must be submitted by email on one of the templates provided at 300DPI in PSD, JPEG, or AI file format. Make sure they are CMYK for color correctness.

All entries grant Squid Kids Ink the right to reprint the artwork in future SKI books. All selected art will become sole property of SKI to be used on an actual 10-Doh! figure and a mini art print that may be included with the figure. No artwork will be reprinted to be sold as a stand alone item.

Artists whose artwork is selected will be notified by email no later than April 7th. They will also receive 5 production pieces of their design.

Please send all submissions or questions to nate.squidkidsink@gmail.com. Make sure to put "10-Doh! Call For Artists" as the subject of the email.
Posted by Nate at 7:18 PM 2 comments:

SO ANALOG IN GERMANY???? 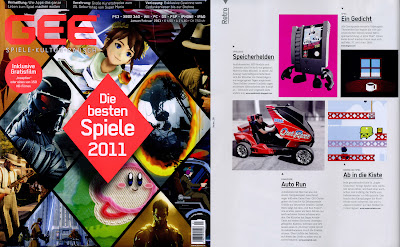 sooooo, way back when i first posted the So Analog custom show announcement on SpankyStokes.com, a lot of websites picked up on it and re-posted the images all over the place. it was pretty exciting to see the great reception of the figures were getting.

i was contacted by GEE magazine from Germany. they asked if it was cool to print some photos in an issue of their magazine, and of course i said yes. i'd never heard of the magazine, but then again, i haven't been to Germany, yet.

they were kind enough to send me a copy of the magazine and that arrived this week. below is the translation that my magical iPhone did for me and makes sense, mostly.

Audio cassettes, NES modules and disks are yesterday's technology? Not for Nate Mitchell. In his "So Analog" figure includes the collection of the artist let Datentragern inspiration from the past. These heroes of our childhood, say modern silver discs in the fight - dusty and forgotten is different.

i'm currently working on doing a small production run of the 10-Doh! figure. i'll post a real update once plans are finalized.
Posted by Nate at 11:25 PM No comments: